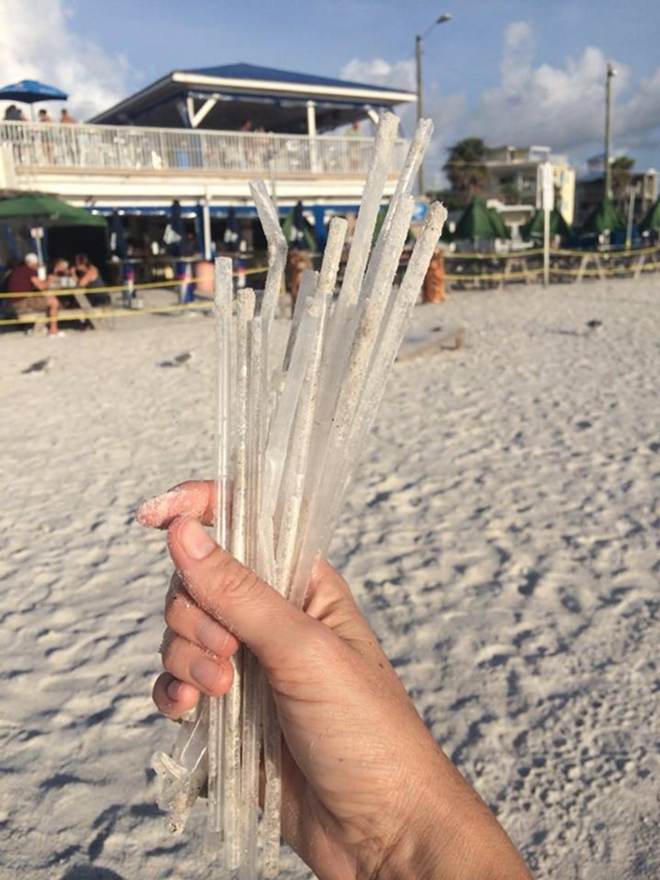 On any given day, if you walk along the stretch of beach that lines a swath of restaurants and hotels along the midsection of Treasure Island, you'll see a slew of discarded straws, plastic straws that pose a vicious threat to wildlife on land and in the sea.

But that could change.

Spurred by a young mother as well as local environment groups, the Treasure Island City Commission is looking at banning plastic straws and possibly single-use plastic cups and six-pack aluminum can rings. In a workshop Tuesday night, commissioners voted 4-1 to draft an ordinance that would bar businesses from serving straws on the beach, and it could include other single-use plastics.

The details of the ordinance have yet to be hammered out, but it's likely that beach bars would have to serve paper straws instead of plastic ones, and individuals may not be allowed to bring them onto the beach.

"This is a huge win," said Julie Featherston, who, as we wrote about last week, posted an image of littered straws when she was on the beach with her son, an image that went viral. "To get an ordinance written about this is, it's going to be black and white. There are going to be real discussions on real solutions. It's incredible."

During the nearly hour-long discussion, multiple members of the public spoke. The majority did so in favor of a ban.

“We should be doing everything we can to keep our coast clean. Banning plastic straws is certainly our first step," said Jennifer Rubiello, director of Environment Florida, a statewide environmental advocacy group based in St. Petersburg.

Ostensibly, no one who spoke was in favor of plastic straws per se. The debate, really, was about whether or not the city should require businesses to halt a practice that's demonstrably harmful to the surrounding environment, or if they should be allowed to elect to do so — or not — on their own.

Doug Izzo, legislative affairs director for the Tampa Bay Beaches Chamber of Commerce, said his organization would prefer if restaurants weren't faced with a mandate, especially since the real issue is litter, something that's already banned in state statute.

“The Tampa Bay Beaches Chamber of Commerce supports businesses voluntarily opting not to use plastic straws," he said. "We have many members that are part of our chamber that provide alternatives, and as you may be aware, we already have a law in place, a littering law, that addresses this. And I think that law just needs to be enforced.”

He said the chamber would prefer an “awareness campaign” that would aim to get businesses and consumers to curb plastic straw use on their own.

One local business that has not only already begun a self-imposed ban — instead opting for paper straws over the past six weeks — but has even embarked on its own public awareness campaign about plastics is Caddy's on the Beach, a beachfront restaurant on the north end of Treasure Island's Sunset Beach neighborhood. Management here said it wants to keep the ban voluntary and instead educate consumers on the dangers of single-use plastics.

Clyde Smith, general manager at the Bilmar, a resort that has two beachfront restaurants, said both restaurants are starting to use paper straws. But he doesn't like the idea of the ban, he said.

"I'm fully in support of protecting our environment and wildlife through reasonable actions," he said. "However, I do not believe that new local laws that may specifically target a minority of local businesses in our community is the appropriate action for the commission to take. Where will this end if we, as a community, if we start creating laws to protect (against) each averse component that we address?"

Featherston disagrees. After the meeting, she said it's easy for businesses to abandon their promises down the road, as she has seen at least one beachfront bar do in another community.

"If it's going to be up to them, a year from now, they can change their mind," she said. "Every little bit of plastic that ends up in our environment is a bad thing. We have reached our tipping point. So if we get lax on the voluntary ban for half the year, that's a lot of plastic in our oceans that we could have saved."

The one member of the commission who agreed with Smith was Mayor Bob Minning, who favored a voluntary ban that could be turned into a mandatory one if affected businesses don't keep it up.

“My approach to this is, let's give it a chance," he said. "I'm not opposed to engaging in an ordinance if that in fact is the mechanism that we need because nothing else is working. But I'm also very, very strong in saying if people are willing to stand up and do it by themselves, the I don't think government should require them to. At the end, if it doesn't work on a voluntary basis, as I said, then I'm more than willing to support it.”

The commissioner who brought the proposal up, Alan Bildz, said he didn't see any issue with a citywide ban; if businesses are willing to stop using plastic straws anyway, there shouldn't be a problem.

It's unclear when the commission will draft ordinance language or hold a vote on the actual ban, which would require two separate votes before it comes law on Treasure Island.