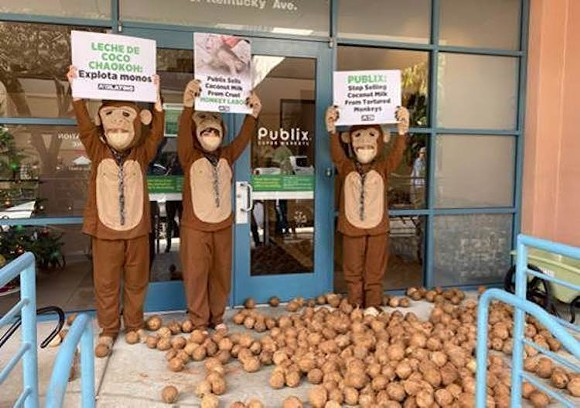 Photo courtesy PETA
Chaokoh brand of coconut milk, stocked by Publix stores, was the subject of an extensive undercover investigation by PETA.

People for the Ethical Treatment of Animals continue their awareness-raising campaign against monkey slave labor with an action Thursday afternoon that aims to shame Publix into dropping a certain brand of coconut milk.

Thailand’s Chaokoh brand of coconut milk, stocked by Publix stores, was the subject of an extensive undercover investigation by PETA that produced some pretty damning evidence of monkeys forced to pick coconuts while in extreme states of anguish. There are claims that the monkey are kept chained to old tires, caged for life, and some have their teeth pulled out.

"Many monkeys displayed repetitive behavior indicative of extreme mental anguish, including one who chewed on his own limbs," says PETA on its website. "One coconut farmer confirmed that when monkeys are terrified and try to defend themselves, handlers pull their teeth out."

This was enough to make some other major retailers — among them Target, Costco and Walgreens — stop carrying the coconut milk brand. Publix has remained a holdout, though.

So, at noon at the Publix on Central Boulevard in Orlando, PETA activists dressed as monkeys plan to dump hundreds of humanely picked coconuts at the store, as a sequel of sorts to a similar action in December at Publix's Lakeland headquarters.

“Milk from coconuts picked by abused monkeys doesn’t belong on grocery shelves any more than monkeys belong on those chains,” said PETA President Ingrid Newkirk in a press statement. “PETA is calling on Publix to reject products of forced monkey labor.” 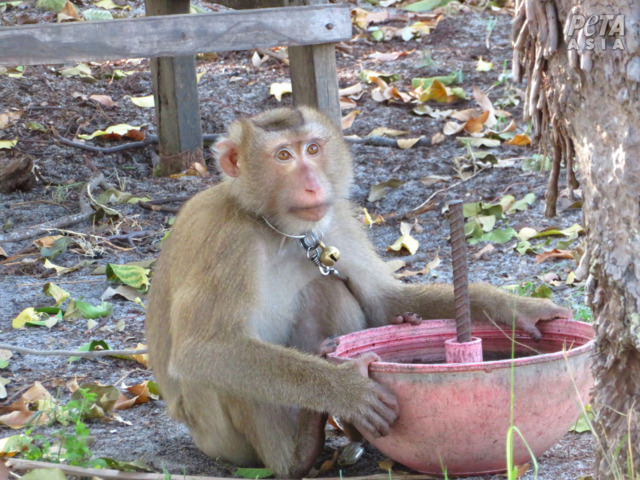 Last month, the company told Creative Loafing Tampa Bay that it "has reviewed third-party audits of [Theppadungporn] and that Thailand's ambassador to the U.S. assured the company that monkeys are 'not used in the commercial harvesting of coconuts.'"

"We work with our suppliers, industry leaders, governmental agencies and non-governmental organizations because we recognize our responsibility and take concerns about animal welfare seriously," said  Maria Brous, Publix Director of Communications. "In this case related to the Chaokoh brand products we carry, we have reviewed the third-party audit and affidavits from the coconut farmers stating that no monkeys are used to pick coconuts on the farms at issue. We have also received the written assurance sent from Thailand's ambassador to the U.S. stating that the Thai Food Processors Association has confirmed that monkeys are not used in the commercial harvesting of coconuts."

Besides Publix, PETA says they’re also focusing on the remaining U.S. retailers that use the alleged monkey slave coconut milk, including Kroger, and Albertsons.

A version of this article first appeared at our sister publication Orlando Weekly.