Godinez-Samperio said he came with his parents and sister to Hillsborough County from Pachuca, Mexico when he was nine because they "were looking for a better life," and says he's done all he can since to prove he's a responsible person worthy of citizenship.


"I did everything right. I was valedictorian (from his 2004 graduating class of Armwood High), Eagle Scout, I was able to go to law school," he says. But when people ask why he doesn't just apply for citizenship, he has to explain that he can't. "There's no immigration system that allows me to do so. If there were, I would gladly apply for a Green Card, I would gladly apply for citizenship."


Godinez-Samperio is one of the young people who could be granted citizenship under the Dream Act, but that much-discussed legislation still hasn't been passed after a decade of debate, though some of the more conservative members of the GOP-led House (like Majority Leader Eric Cantor) are now saying that they could support it in 2013.


Although there's been much talk this year that Republicans in Washington are ready to work with Democrats on immigration reform, it is by no means a done deal — especially in the House of Representatives.


Democratic Representative Castor says she's hearing some hesitance from her GOP colleagues when it comes to the often-mentioned concern about border security. "President Obama has been very tough and sent back and deported many who have criminal records," Castor said Monday morning. "The budget has risen from $4 billion into $16-17 billion (for border security)," she added, saying that's an issue that can be "checked off the list" of things that need to happen before allowing the estimated 11 million undocumented immigrants a pathway to citizenship.


When asked what she hopes to hear from Obama during Tuesday night's State of the Union address, the Tampa Democrat says an emphasis on creating jobs would be a good thing. She also warns of the "very conservative House forcing a sequester" — that being the next big showdown in Congress over a total of $1.2 billion in cuts that would begin on March 1. That sequester was originally created during the summer of 2011 to force Congress to come together on a budget deal, but they remain gridlocked, even with the deep cuts now just two and a half weeks away from going into effect.


Last week, President Obama unveiled a new proposal to head off the sequester, but House Republicans have said that it's inefficient and relies too much on raising taxes. They say tax hikes were limited to the fiscal cliff talks, and the only tax hikes they'd like to see would involve ending corporate loopholes. 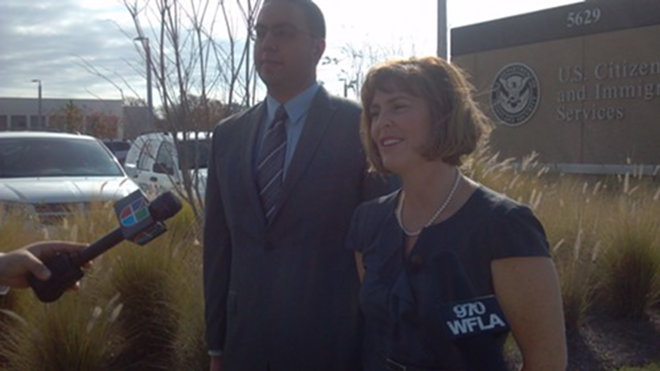 Congresswoman Kathy Castor with Jose Godinez-Samperio, her date for next week's State of the Union address.
Mitch Perry
click to enlarge

Congresswoman Kathy Castor with Jose Godinez-Samperio, her date for next week's State of the Union address.
Mitch Perry

When it comes to advocating for comprehensive immigration reform, Tampa-area Democratic Congresswoman Kathy Castor is all in. Today she continued her strong push for a measure to be passed this year by announcing that 26-year-old Florida State Law School graduate Jose Godinez-Samperio will be her guest for the annual State of the Union address. The speech will be delivered by President Obama on Tuesday night in Washington D.C.

Godinez-Samperio is the Hillsborough County resident who made headlines last fall by attempting to become the first undocumented immigrant to obtain a law license. His case went before the Florida Supreme Court after he earned a law degree from Florida State University and passed the state bar exam last year. The Board of Bar Examiners in Florida said they could find no reason to deny him a license, but asked the state's high court for guidance.