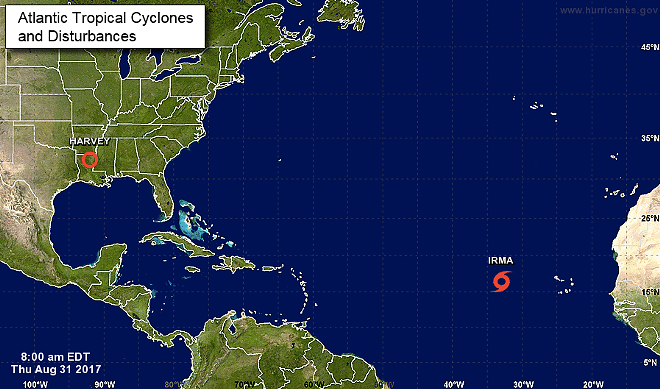 In only 32 hours, there will be three glorious days of ...probably laundry.

Just kidding. Beach, all the way.

While Wednesday's news wasn't terrible, it was still very much not beach.

Tropical Storm Irma formed west of Cape Verde, and it could become a hurricane. No one is quite sure where the storm is headed, other than northwest-ish, but the good news is that it's nowhere near close enough to harsh your mellow this weekend.

In regard to the storm from which coastal Texas is currently reeling, if you are, say, in a very high-level leadership role and you're obligated to in some capacity witness Hurricane Harvey's devastation yourself but instead merely talk to people who have witnessed the devastation themselves, how would you describe that in terms of, oh, I dunno, hands? Probably not like this.

As if residents of Houston and surrounding environs weren't suffering enough, along comes one hell of a pairing of a word and a phrase: "chemical plant" and "explosion." It's another reminder of the caustic and otherwise terrifying things that take place on civilization's periphery in order to prop up a standard of living that enables us to subsist on manufactured garbage food.

Closer to home, Governor Rick Scott moved more cases out of 9th Circuit Court District State Attorney Aramis Alaya's jurisdiction out of concern that she won't call for the killing of people accused of killing people. Because life is precious...? Or something.