Silo politics: Did the first debate change anyone's mind about their chosen candidate? 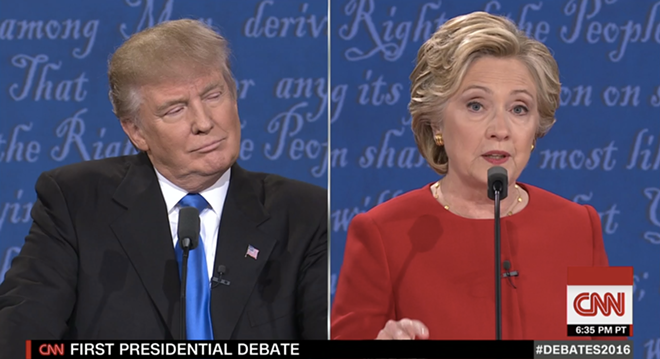 Screen grab, CNN
STYLE OVER LACK OF SUBSTANCE: Viewers at Bay area watch parties seemed less into what was said than how it played.

From a table at The Queen’s Head in St. Petersburg’s diverse Grand Central District, it was hard to see how anyone could declare victory for GOP nominee Donald Trump after Monday night’s bruiser of a debate against Democratic nominee Hillary Clinton.

As we ate our vegan burgers and sipped pinot grigio (the house white; it was two for one), Clinton’s quick comebacks and Trump’s cringeworthy gaffes rolled by like waves.

There was the moment when Trump implied he didn’t pay federal taxes, calling it “smart” not to do so, adding a bit later that his income taxes “would be squandered” even if he were willing to pay them. And when he endorsed racial profiling. And when he said his father’s company settled a discrimination lawsuit “without admission of guilt.”

The line that got the most laughs?

When Trump asserted that his temperament was better than that of Clinton.

But the quote that encapsulated the night — hell, the whole election cycle up to this point — came from Clinton.

“Well, Donald, I know you live in your own reality, but...” she said, trying to defend her positions on trade in between Trump’s interjections.

She hit the nail on the head on multiple levels.

The willingness to divorce oneself from a universe in which everyone shares the same set of facts has been a major problem with politics in recent years. While the polarization that’s dominating the process is nothing new, what is comparatively new is our collective inability to agree on the veracity of even the most basic objective data points.

And neither side of the political spectrum is immune.

Many on the left want to attribute the economic boom of the 1990s and the subsequent crash on presidents Bill Clinton and George W. Bush, respectively, but there was a complex combination of factors at play contributing to each.

The bulk of the right, meanwhile, refuses to accept a consensus among nearly everyone in the scientific community that climate change is indeed happening, and that humans are a factor.

On Monday night, Trump denied calling climate change a Chinese hoax, even though a 2012 tweet of his saying exactly that still circulates on social media.

And regardless of the multitude of investigations in which she’s been determined to have done nothing illegal or wrong, Trump and his followers (as well as many former supporters of Sen. Bernie Sanders’ presidential bid, who now pass along right-wing anti-Clinton fodder like it’s gospel) insist she’s guilty of a number of crimes — Benghazi; using a private email server for classified information; even murder.

The wealth of often fictional clickbait on social media can confirm any bias. As the Wall Street Journal recently illustrated, algorithms on sites like Facebook pull similar stories into your newsfeed, creating an “echo chamber” that reinforces your views instead of challenging even the most far-fetched conspiracy theories.

The Journal set up two Facebook feeds, a red one and a blue one, to capture post-debate analysis. What they found was that the two pages each populated themselves with headlines that seemed to have been plucked from two completely different realities.

This means that many who call themselves politically involved conduct themselves in virtual silos, their walls fortified by the likes of Breitbart on the right and US Uncut on the left. And when they’re presented with a point of view that runs counter to theirs, the arguments that ensue are typically just a rehashing of their views; no conversation is had, and no minds are opened.

Online polling in the wake of Monday’s debate was telling.

While Clinton kept cool, sharply outlined her platform and was quick with witty comebacks, Trump was defensive, lacking in specifics and dour. Even his campaign manager didn’t declare victory; instead, she opted to call both their performances “satisfactory.”

Yet numerous online polls (from Time to Politico to USA Today), suggested that many people think Trump won, though some believe results may have been manipulated by 4chan.

At another debate-night watch party, this one at a Beef-O-Brady’s on the University of South Florida’s Tampa campus, young Democrats rallied behind their candidate, even as the Trump supporters among their peers derided her.

Each of the restaurant’s seats seemed to be filled with a Clinton supporter, while a line of about a dozen or so Trump supporters leaned against a short wall, one side cheering when Hillary asked Trump to produce his tax returns, the other when Trump replied that he would when Hillary released her deleted emails.

Noticeably absent were the cheers for any sort of talk about policy specifics.

In fact, it was the moderator who made clear both of their positions on the economy: Trump wanted tax cuts for the wealthy, Hillary wanted to tax them more. Eased of the burden of having to clearly state their plans, the candidates used their “two minutes” (a time limit to which neither adhered) to instead ask about the aforementioned emails and tax returns.

During the second half of the debate, the candidates contrasted one another’s divergent views on the country’s race relations predicament, another divisive issue that sparks explosive debate — but no dialogue — on social media.

Trump said something about “Stop and Frisk” in the same breath as “good ideas,” which dropped jaws all over the restaurant. His claim that he’s improved his standing in the black community just because he’s visited a few of them also came as a shock.

Clinton, on the other hand, talked about the good that comes out of the black community, and the need to reduce gun violence. Much applause came from the Clinton supporters.

Students came away from the debate struck more by how things were said than what was actually said.

Well south of campus, in the Seminole Heights neighborhood, prominent Democrats gathered at Fodder & Shine for the slugfest.

Among them were Tampa Mayor Bob Buckhorn, State Rep. Ed Narain (D-Tampa) and Alex Sink, FL's former chief financial officer who narrowly lost to Rick Scott in the 2010 race for governor. There are quite a few parallels between Scott and Trump: a mega-rich then-newcomer to campaigning (and now a Trump supporter), Scott largely funded his own campaign and rode into victory (and reelection four years later) on the Tea Party wave.

Ahead of the debate, Sink predicted Trump would go for some “low blows,” but she believed Clinton could rise above. “Like Michelle Obama said in her speech [at the 2016 DNC], she needs to keep it on the high road.”

As soon as the debate began, the crowd’s allegiance was clear. Patrons cheered when Clinton dubbed Trump’s proposed tax cuts for the upper class as “Trumped-up trickle-down economics.” They clapped when she addressed “the systemic racism in our criminal justice system.”

The Fodder & Shine crowd’s disgust was audible, practically palpable at key points in the debate, namely at Trump’s response to Clinton’s accusation that Trump exploited the housing 2008 crisis for his own financial gain.

“That’s business, buddy,” he said, to the jeers of the crowd.

“Hillary Rodham Clinton clearly came out as a presidential candidate. Donald Trump didn’t belong on the stage,” she said.

She marveled at how Trump fumbled most spectacularly on the questions of his tax returns and the “birther” issue.

“[It’s as if] no matter what he says, he’s lying about it,” Cartwright said.

She hopes the Fox News watchers can see past his lies, even if he is now receiving advice from the network’s founder and former CEO, Roger Ailes.

But that’s all people like Cartwright can do: hope, as she goes door to door in an effort to persuade oft-undecided or disillusioned voters to go for Clinton, that she gets her perspective to them before the clickbait does.