It's right on the heels of #MeToo, and organizers are encouraging costumes to help draw attention to victim blaming. 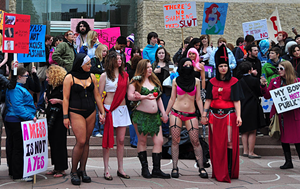 Hugh Lee/Creative Commons
An image from a Canada Slut Walks. These protests attract marchers across the globe.

With their provocative moniker — and their perhaps even more provocative optics — so-called "Slut Walks" have been taking place in cities around the globe. For the first time ever, the event is coming to University of South Florida's Tampa campus on October 30.

They're just in time for Halloween, so costumes are encouraged.

Typically, these events involve getting scantily clad and marching freely through highly trafficked public spaces with a message promoting female autonomy while challenging rape culture and the notion that women dress the way they do solely to send a message to men, usually one of a sexual nature.

But mostly, it aims to spread awareness of the scourge of sexual assault on college campuses and similar environs as well as the all-too-common practice of victim-blaming.

“It does not matter who you are, what you were wearing, if you were drinking, if you had a previous sexual encounter with this person, or any other number of factors surrounding your assault, if the sexual advance was unwanted, it was rape or harassment. Victim blaming is one of the most common forms of subordination which allow for the perpetuation of these acts, which is why this march is so necessary,” said event co-organizer Kate Shrum in a media release heralding the event.

The event comes after the wave of social media activity around the #MeToo hashtag, in which women everywhere were encouraged to share their experiences with sexual assault and sexual harassment as well as just straight sexism. And share they did — as did quite a few men.

Organizers hope the event will also spark a more serious discussion of campus policy when it comes to sexual aggression and other bad behavior.

“The #MeToo movement could not have come at a better time! We need the conversation surrounding sexual assault and harassment to remain at the forefront of people’s minds," said co-organizer Dolly Ferraiuolo. "We need USF administration to institute a ZERO TOLERANCE policy, so all students can feel safe and protected on campus."

The event goes from 2-5 p.m. on Monday, October 30, starting at MLK Plaza on the USF Tampa campus.