So you think you can dance?

A Tampa dance studio is accused of denying lessons to a lesbian couple. 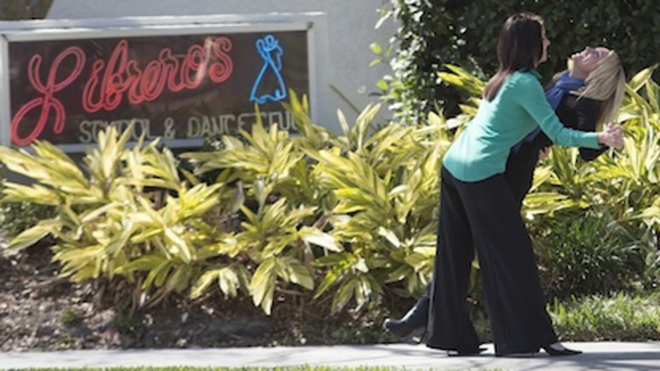 This past Valentine’s Day, Danielle Beckmann found herself in the exciting early stages of a new relationship. She wanted to find the perfect gift for her girlfriend of three months, Megan Younkman, and decided on something that would not only be romantic, but also a unique way to spend time together: dance lessons.

But rather than putting on their dancing shoes, the couple said they instead found themselves facing anti-gay discrimination, which led to Beckmann filing a formal complaint against a local dance studio with the City of Tampa’s Community Affairs Department.

With American TV audiences revved up for rumbas again with the latest season of Dancing with the Stars, the questions raised by Beckmann and Younkman can be applied to ballroom dancing as a whole: Is it a world in which gender discrimination is built in?

Librero’s School & Dance Club has been operating out of its studio on Davis Boulevard since 1979. Beckmann, 27, and Younkman, 36, spend most of their time at Younkman’s apartment on Davis Islands, so Librero’s, which they’ve passed many times, was an obvious choice for Beckmann when she decided on dance lessons as her Valentine’s gift.

She called the studio just before Valentine’s Day and learned it was offering a special dance package for couples — $79 for one group and two private lessons.

But at the last minute, her job (she is an assistant at an ad agency) conflicted with her Valentine’s plans, so she called Librero’s again a week later to see if she could still get the discounted rate.

The special was still available, she was told by a woman who identified herself as Blanche Librero.

Then the conversation took an unexpected turn, according to the complaint Beckmann filed with Community Affairs.

“When I asked Blanche Librero if they gave lessons to same sex couples,” reads the complaint, “she replied: ‘No, we’ve been here for 35 years and our lessons/ballroom is full of heterosexual couples.’”

Instead of a group class and an opportunity to dance together, Librero offered the couple separate, singles lessons, Beckmann said. According to the complaint, Beckmann inquired whether she and Younkman could take the private lessons together instead, since it was intended to be a romantic outing for the pair, and was told there weren’t enough instructors available.

“It was kind of ridiculous,” Beckmann said in an interview. “How many instructors does one couple need? I wouldn’t gather that two people require more instruction than a group of 30 people or an individual.”

Rebecca Crigler, a former instructor who taught at Librero’s between 2003 and 2007, said splitting up a couple is out of the ordinary for the studio. “They wouldn’t separate a couple; they wanted to keep couples together,” she said. “Their market is couples – social dancing couples.”

The couple decided to spend a weekend away together for a belated Valentine’s Day celebration rather than take dance lessons. They enjoyed their trip, but Beckmann was haunted by her experience with Librero’s. “It took some time to sink in, but I was really taken aback,” she said. “I’ve never experienced any kind of discrimination before and I’m a little unhinged by it. … It was a little disheartening.”

On Friday, March 8, she filed a formal complaint with Community Affairs.

Community Affairs handles citywide investigations of discrimination complaints and enforces the city’s Human Rights Ordinance, which guarantees “equal access and the full enjoyment of goods, services, facilities, privileges, advantages, or accommodations of any place of public accommodations” for a variety of protected classes, including the LGBT community. The ordinance excludes establishments and private membership clubs that aren’t open to the public.

“A dance studio would be considered a place of public accommodation,” said Deborah Marshall, an investigator with Community Affairs, prior to the filing of the complaint. “It’s unbelievable things like this go on, but they’re the reason [the city] added that [LGBT] protected class to the ordinance.”

Jake Slater, director of Neighborhood Services, which oversees Community Affairs, couldn’t legally comment on the complaint because it is “an open, active case.” But he did say Librero’s had been sent a copy of the complaint, and the next step would be mediation or investigation.

“Normally, we help mediate between the two parties and try to come to a mutually agreed-upon settlement,” he said. “We try to get both parties together as our first step.”

The reason, he said, is because the school tries to cater to their “mostly heterosexual” clientele. “We have an older crowd here, with a different, old-school mindset.”

Blanche Librero wouldn’t comment for the record. But via email, the studio’s attorney, Arnold Levine, responded, “I am satisfied that neither of the Libreros ever said that they do not allow same-sex couples to dance together.” In the studio’s March 19 response to the city re the couple’s complaint, Levine called the allegations of discrimination “absolutely false and untrue” and for that reason the studio “declines to participate in mediation.”