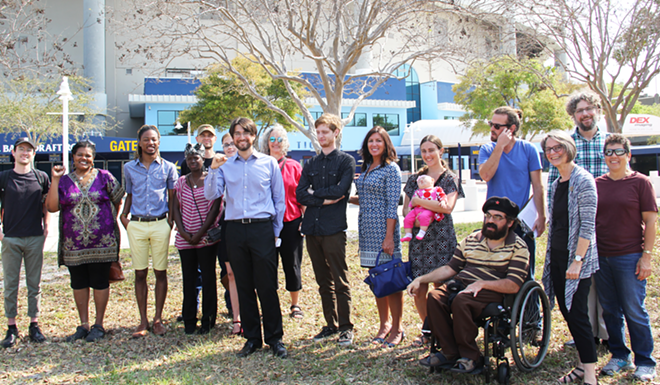 Kyle Wyss
Nevel, fifth from the left, is surrounded by supporters after announcing his candidacy for mayor outside Tropicana Field.

Nevel, a 27-year-old member of the Uhuru Solidarity Movement — a group of white activists that stands with the African People's Socialist Movement (also known as Uhuru) — launched his bid with a striking slogan: "Unity through Reparations." It's the idea that the city should invest more resources in leveling the playing field for the city's African-American population. Some 20,000 or so people on the south side live below the poverty level and many are plagued with disproportionate rates of addiction and homelessness. And the few opportunities available to many residents are low-wage retail and service jobs that keep the city's tourism economy going. That has to stop, Nevel said.

He chose Tropicana Field, which was built on land that was once a predominantly black area with homes, schools and businesses, because of its metaphorical value; the neighborhood, the Gas Plant area, was bulldozed to make way for the facility.

“In the face of the lynchings of the black people that were commonplace in this city and the repressive Jim Crow laws that restricted black residents from sitting on green benches or leaving their communities after a certain time of night, the Gas Plant was a place where the black residents of St. Pete created their own prosperous community, with libraries, schools, movie theaters, gas stations, nightclubs, restaurants and more. The city wiped out the Gas Plant community to build the Dome, the Tropicana field, as economic development for white business interests," Nevel said.

Nevel is challenging Kriseman, who has served in the state legislature as well as the St. Pete City Council. Kriseman, 54, has championed progressive causes, including LGBT equality and workers' rights. He has also sought to tackle environmental issues like renewable energy., but those efforts have been somewhat overshadowed by the release of partially treated sewage into area waterways when the wastewater system got overrun with storm water — something the mayor has said has been a disaster years in the making due to the city's aging infrastructure.

A perennial candidate is also in the race, and speculation still lingers over whether Kriseman, a Democrat, will face a challenge from a Republican-backed candidate (despite the fact that the city's municipal contests are all nonpartisan).

Kriseman has advocated for economic development on the south side, both in small ways and via a Community Redevelopment Area designation that would help the area improve by way of rising revenue from property taxes as values go up.

But Nevel doesn't think the city's current approach goes far enough for the south side, which recently lost its only grocery store.

In explaining what he sees as a need for reparations, he called for an end to police violence on and mass incarceration of African Americans, and for boosting economic prosperity for those it has long eluded.

Reparations, he said, are "positive public policy of economic development for the city's historic black communities. That will being the city together: repairing the damage the city has inflicted on the black residents of our city time and time again, mayor after mayor.”

Part of that, he said, means giving the African-American community more control over those who police the area (i.e. an elected board to make sure law enforcement is conducted with fairness). As for the Trop, he said, it would only be fair to give it back to the community that had been there for generations.

“When I am mayor, uniting with the leadership of the black community itself, we are going to bring this to an end. Nearly 20,000 people living on the south side are struggling below the the federal poverty line. That has got to go,” he said.

It's unclear what kind of a shot Nevel has, but it's the first time, at least in recent memory, that there's been an Uhuru-backed candidate for mayor. Asked whether he was concerned about splitting the vote between moderate Democrats and progressives, thereby clearing the way for a conservative to take control of the mayor's office (similarly to what played out at the national level in 2016), he said he wasn't worried about it — because he's confident he'll win.

Among backers who spoke in support was Chimurenga Waller, an outspoken longtime Uhuru activist, who cited the need for someone like Nevel, given what's at stake in the current political climate. He said the slogan "Unity through Reperations" was “one of the most radical slogans that I've seen in any municipal election.”

“For these radical times, we need Jesse Nevel to be the mayor,” he said.

The Uhuru movement also has a candidate in one of the St. Pete City Council races. Eritha Cainion, 20, is vying in a multi-way race for the District 6 council seat, which Councilman Karl Nurse is leaving due to term limits.

While St. Petersburg has been a largely progressive city (aside from the clear economic inequality plaguing the south side), it's unclear how the politics will play out in the mayor's race of 2017.

CL reached out to a spokesman for Kriseman's campaign Wednesday, but has yet to hear back.