It's all part of the likely candidate for Florida governor's attack on so-called "sanctuary cities." 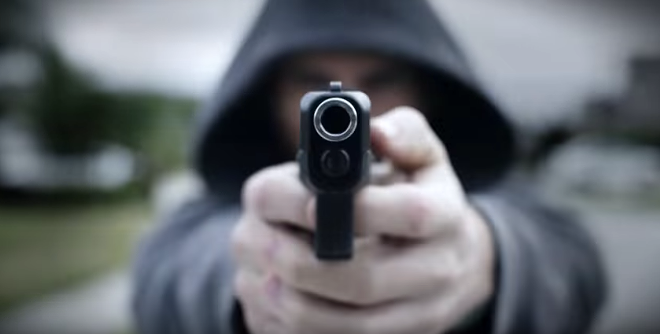 A nonprofit that tracks hate groups and race-based violence is railing against a 30-second spot on which Florida House Speaker Richard Corcoran's political action committee spent nearly $100,000 earlier this week.

The ad, which ran on Fox News in multiple Florida media markets this week, apparently aims to invoke in viewers the ol' fear of immigrants (well, the brown ones, anyway).

It's an intense dramatization suggestive of an incident the alt-right often uses to bolster their argument for mass deportations: the death of 32-year-old Kate Steinle from a bullet an "illegal" fired. Last year, Jose Ines Garcia Zarate — a Mexican immigrant who had been deported several times — was acquitted of her murder after defense successfully argued it was an accident and the gun went off accidentally and killed her after ricocheting.

The spot features a rather ethnic-looking man skulking around a suburban neighborhood, then gunning down a young white woman, apparently at random.

Corcoran himself then appears on screen with his own daughter, also named Kate, and claims some Florida policymakers are trying to turn Florida into a "sanctuary state" just like California, where Kate Steinle was killed.

The ad's aim, of course, was to scapegoat and demonize immigrants even if in reality, the crime rate among immigrants is significantly lower than that of natural-born U.S. citizens. Corcoran is sponsoring a bill targeting "sanctuary cities," in Florida, despite the fact that, for jurisdictional reasons alone, they don't really exist in the state (i.e., county sheriffs' departments, which tend to be led by conservatives, process most arrests).

But, as with most machinations in Florida politics, an ulterior motive could be likely.

Corcoran, you see, is probably going to run for governor.

If and when he announces (probably once the legislative session is through), he'll probably face a crowded GOP primary. The best known Republican candidates who've already announced are Florida Ag Secretary Adam Putnam and Congressman/Trump ally Ron DeSantis.

To win a Republican primary in Florida, as current conventional wisdom has it, one must swerve far to the right at all costs.

On Thursday the Southern Poverty Law Center called Corcoran out on what they said was a "disturbingly inaccurate" example of "fear-mongering" not dissimilar to Trump's mention of the gang MS-13 in his call for a border wall and an end to "chain migration" during Tuesday's State of the Union Address.

Trump, of course, backs DeSantis at the moment, and SPLC ventures that Corcoran's attempt to demonize millions of undocumented immigrants may be a way to siphon some of that far-right support.