Council members also failed in advancing even the possibility of rent stabilization ordinance in 2023. 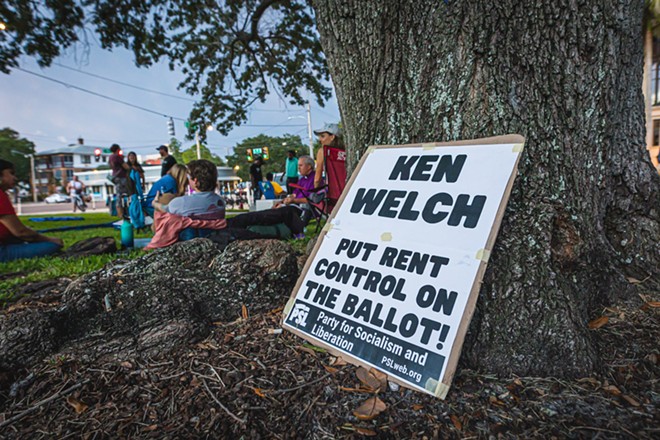 Photo by Dave Decker
Activists outside St. Petersburg City Hall on Aug. 3, 2022.
On Wednesday, for the  second week in a row, residents of St. Petersburg camped out on the steps of city hall. About 30 people, this time watched closely by Pinellas Sheriff's working outside their jurisdiction, pitched tents and risked arrest to demand the city give voters the choice to decide for themselves on the issue of rent control. The next day, dozens lined up to beg city leadership for one simple request: let the people decide.

In an hours-long contentious debate, city leadership responded with a new motion referring the issue to the Youth and Family Services Committee. But the motion also failed in a 3-5 vote, with Deborah Figgs-Sanders, Richie Floyd, and Lisa Wheeler-Bowman voting in favor of the measure.

“All we’re doing is asking for a conversation to assist legal with the drafting of the ordinance for a housing state of emergency,” Councilmember Deborah Figgs-Sanders said. “I’m so exhausted that we’re fighting so hard against having a conversation...I’m saddened.”

Figgs-Sanders’ new motion asked the city’s legal department to draft an ordinance for rent stabilization for the 2023 special primary election.

Last week, city council passed a motion asking legal staff to draft a resolution declaring a housing state of emergency in order to put rent stabilization on the November ballot. Councilmembers Figgs-Sanders, Lisa Wheeler-Bowman, and Richie Floyd supported that measure, but the original motion’s language was never put to a vote on Thursday.

Floyd unsuccessfully proposed declaring a housing state of emergency in the Housing, Land Use, and Transportation committee back in February. Back then, city administration echoed the city’s legal department, which cautioned that any rent stabilization efforts would put the city at too great a legal risk.

After missing last week’s vote, Councilmember Lisset Hanewicz said she was “shocked,” her colleagues went against the city’s legal advice to pursue a resolution.

“I’m not willing to do anything on this issue,” Hanewicz said. “We are still bound to follow the laws.”

Hanewicz didn’t mince words when addressing council, and cautioned against legal advice given to council on the issue from outside the city’s legal department.

“We understood that the city attorney’s office, much like every city attorney’s office, their job is to be risk-averse. Their job is to travel the path of least resistance when it comes to litigation,” Foster, whose group provides “innovative legal and strategic support to social justice movements,” said. “As a movement lawyer representing people fighting for social, racial, and economic justice, my job is not to talk about what the law can’t do. It is to talk about what the law can do.”

Of the 60-plus people who spoke, less than a third opposed the measure. Landlords, including one man claiming to have been a formerly homeless millionaire, spoke about rising costs, and diminishing returns. One landlord cited the cost of paint, another spoke about replacing costly air filters. A lawyer representing the Florida Apartment Association cautioned against legal ramifications of the council’s motion. They talked about rent control being bad for the problem of housing; they cited supply and demand.

“There is clearly a need in the city,” Eric Garduno with Bay Area Apartment Association said. “Rent control is not the answer.”

But for the majority in the room who were in support, the opportunity to vote on rent control comes from a place of desperation. Beverly Brannon, a legally blind woman who cares for her two blind children and three grandchildren, spoke about her rent going up from $1,700 to $2,400 recently. Alexa Manning grew up in a St. Petersburg that didn’t allow her to live where she wanted because of the color of her skin.
“Most white neighborhoods don’t want us...that’s why there’s so many people of color on the southside because we couldn’t live anywhere else,” Manning said. “Help us stay in our homes, that’s all we ask.”

At last night’s sleep-in, Allendale Methodist Church’s Reverend Andy Oliver was issued a $93 citation by police after taking responsibility for the action. 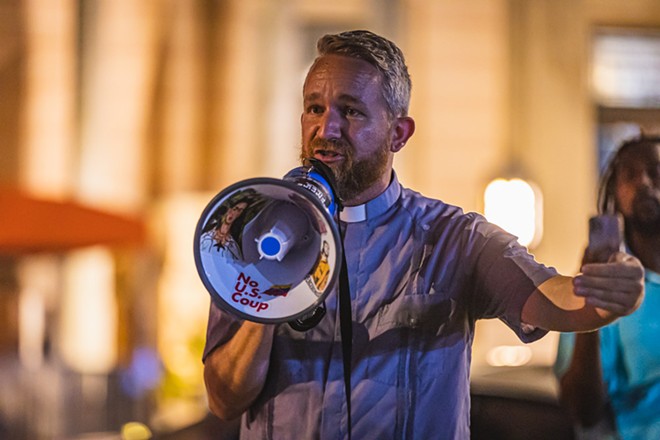 Photo by Dave Decker
Pastor Andy Oliver addresses activists outside St. Petersburg City Hall on Aug. 3, 2022.
“I was prepared to be arrested because some things are worth being arrested for,” Oliver said. “Act with the urgency you did in banning plastic straws, our people are far more important.”

Councilmember Brandi Gabbard, a realtor herself, asked councilmember Figgs-Sanders her rationale for referring the issue to the Youth and Family Services Committee and not Gabbard’s HLUT committee.

“As far as HLUT is concerned, this issue already has already had a go at this committee,” Figgs-Sanders said. “This is bigger than housing. This is about our children, our families, this is bigger than just sleeping. If it was just about sleeping and where you laid your head, we wouldn’t be here today.”

Gabbard asked if Figgs-Sanders wanted to amend her motion to open the vote to the committee as a whole instead of the YFS.

“Certainly I’ll consider it but councilmember Hanewicz already said they won’t do anything with it,” Figgs-Sanders said. “What are we telling the people here today with that?”

“We’re just creating another landmine just by keeping this conversation going,” chairperson Gina Driscoll said before voting against the motion.

“There is a time for challenging the legal process,” Floyd said. “I’m one for being reasonable, but I’m also one for recognizing the world that we’re in.”

Before the vote, Karla Correa, with the St. Pete Tenant’s Union cited the 3,500 homeless Pinellas County School students starting classes this week. Of those 3,500 homeless students, roughly 38% are from St. Pete.

“Do you not think that homeless children are an emergency?” Correa said. “We’re gonna have rent control in this city, and in the whole state of Florida. The more you vote in favor of landlords, the more you embolden the tenants to fight back.”

After the vote, Driscoll closed by thanking St. Pete Police Chief Anthony Holloway for “ensuring we have had the space for democracy and ensuring recent events were carried out safely and within the law,” referring (presumably) to last night’s sleep-in.

The room balked and erupted into a chant, “We will not be silenced, evictions are our violence.”