St. Pete Police actually had to remind everyone that it’s illegal to run over protesters with a car

"Anyone who intentionally drives into a protester will be charged according.” 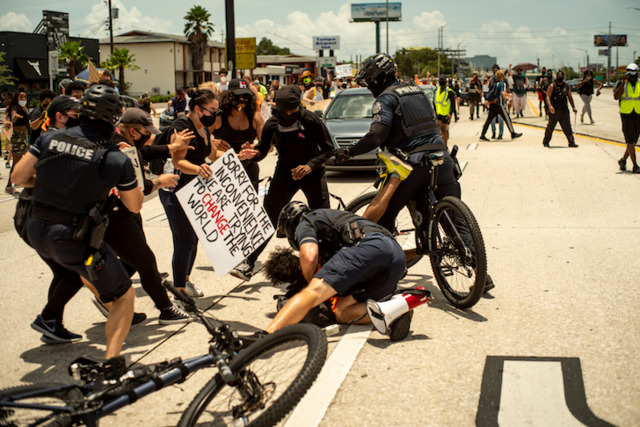 While the Tampa Police Department has yet to charge two drivers who plowed through a June protest (that resulted in the arrest of the injured demonstrators), the St. Petersburg Police Department is reminding everyone that intentionally running over people with an automobile is, in fact, insanely illegal.

In a tweet sent Monday morning, the department actually felt compelled to clarify to the public that intentionally running over a protester will result in charges. “#stpetepd does not condone anyone driving into a crowd of protesters or promoting violence against protesters,” said SPPD in the tweet. “Anyone who intentionally drives into a protester will be charged according.”

#stpetepd does not condone anyone driving into a crowd of protesters or promoting violence against protesters. Anyone who intentionally drives into a protester will be charged according.


In a July 23 email correspondence with Creative Loafing Tampa Bay, SPPD Public Information Officer Yolanda F. Fernandez issued this statement. “Neither Mayor Rick Kriseman nor Chief Anthony Holloway condone any suggestion of harming protesters... For the safety of everyone involved, they encourage motorists to remain patient and find alternate routes around the protesters.”

The department has also made it clear that they will ticket protesters who block streets. On July 7, St. Pete police announced that it would start enforcing stricter pedestrian traffic rules.

“At first, officers will hand out flyers to educate and warn pedestrians, including protesters. Citations will follow later this week with a $62.50 fine,” read a statement. So far, SPPD has since given seven citations to protesters for blocking traffic, report the Tampa Bay Times.

According to Florida Law, both pedestrians and motorists are responsible for staying out of each other’s way, and it’s also illegal to intentionally run over a protester blocking an intersection or street.

However, while vehicular manslaughter may seem like an incredibly obvious thing to condone, the Tampa Police Department has yet to even comment on this topic.

On June 23, Tampa Police Chief Brian Dugan took a slightly different approach while speaking at a news conference, calling for the “good people” of Tampa to start complaining about protesters blocking streets. “I want the good people who support the police to start stepping up,” he said. “If you are sitting in traffic and it’s being blocked, you need to step up and complain.”

TPD has also yet to make any arrests involving three drivers who intentionally drove through a crowd of protesters marching down Dale Mabry on July 4.

CL reached out to TPD for comment, and will update this story if they get back to us.