The move follows Mayor Rick Kriseman's announcement in February that he'd seek the new name in conjunction with a major renovation.

It's also a move that, if approved on final reading on April 19, is likely to annoy the city's conservatives when they go there to pick up large-print editions of Bill O'Reilly's Killing Kennedy. ...Not that there is huge swath of 'em within St. Pete city limits anyway.

It follows Mayor Kriseman's February announcement heralding the name change, and accompanies plans for a multi-million-dollar renovation to the facility, which is situated in the heart of the city at 3745 9th Ave. N.

Kriseman applauded the council for supporting the new name.

“Highlighting Barack Obama’s extraordinary story and history-making presidency in this way will inspire generations of young people in St. Pete and will complement the city buildings and other amenities that bear the name of local trailblazers," he said in a statement following the vote. "I am looking forward to unveiling the name change and cutting the ribbon on what will prove to be an exciting and innovative hub for learning in our city.”

President Obama is incredibly popular in St. Petersburg, a city where there is still a degree of racial segregation and economic inequity between the city's black and white populations.

It's also a city where President Donald Trump is wildly unpopular. In November, Kriseman won a tough reelection battle against former Mayor Rick Baker, a Republican whom Kriseman's supporters easily tied to Trump, given how Baker refused to say who he voted for in 2016. (Municipal races are, of course, nonpartisan, but partisan politics appeared to be a major factor in its outcome). Kriseman, on the other hand, made national headlines when he tweeted that Trump was banned from St. Petersburg in 2015, when then-candidate Trump first pitched his so-called Muslim ban.

As for the library renovations, they include 42 parking spaces, completion of the building's sprinkler system, making the bathrooms ADA compliant, renovating the patio and outdoor gathering space and revamping the library's interior area with "new programming areas."

In other words, bringing the place into this decade.

Here's a rendering the city provided. 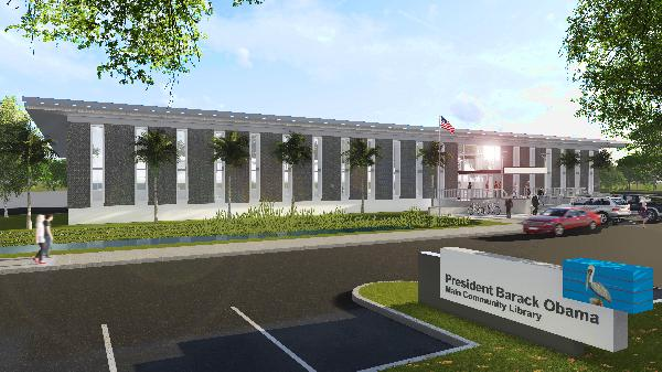 Courtesy of the City of St. Petersburg

The city is inviting the public to weigh in on what they'd like to see in the new programming areas. Find that survey here.