St. Petersburg College faculty moves to unionize and hopes administration gets on board

Faculty leaders told CL that SPC's president said she wasn’t ready to make a decision yet.

St. Petersburg College faculty leaders with the United Faculty of Florida (UFF) met with St. Petersburg College (SPC) President Dr. Tonjua Williams last Friday to notify the college administration of their plans to unionize and to seek voluntary recognition of their full-time faculty union, which faculty leaders say would give them a legally recognized voice at the bargaining table.

“We bring a lot of valuable knowledge and experience,” Dr. Jessica Magnani, an English professor and UFF-SPC faculty leader told Creative Loafing Tampa Bay Friday afternoon. “Including us in a formal way through a union, I think, would improve the college overall and the experience of our students.”

Unionizing efforts by full-time faculty members at SPC began in earnest earlier this year, after the college administration announced plans to cut the salaries of faculty and staff, and to amend annual and continuing contracts for all employees who make over $26,000 a year.

According to a petition created and circulated by concerned faculty members in July, the new contracts required that faculty consent to “an adjustment or salary reduction on a temporary basis in accordance with the College’s strategic personnel plan, and based on a financial urgency, decrease in state appropriations or student enrollment, and other such factors as may adversely impact the budget and operations.”

Both the announced salary cuts and contract addendum became a rallying point for faculty members, according to three UFF-SPC faculty leaders CL spoke to Friday afternoon.

All in all, the petition ended up getting more than 800 signatures. While this gave the administration pause, Magnani said faculty members were “strongly encouraged” to sign the new contract addendum.

“We understand that there's a pandemic and that things are changing, sometimes by the minute,” she said. “But I think that was when we really felt like we had really been left out of the conversation.”

Faculty leaders told CL they had a respectful and diplomatic discussion with Dr. Williams Friday morning. But they confirmed the president had said she wasn’t ready to make a decision at that time.

“She said she would consider it carefully and do some research,” Magnani said. “And so we look forward to hearing back.”

When reached for comment, a spokesperson for the college told CL that Dr. Williams would be looking into the matter further, and that the president looked forward to having future discussions with the faculty. 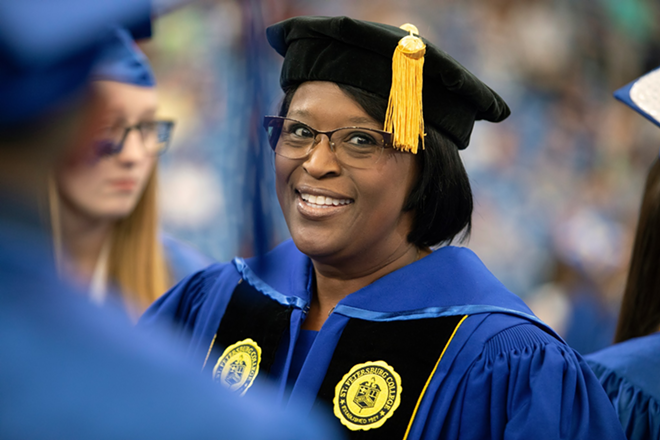 stpetecollege/Facebook
A spokesperson for the college told CL that St. Petersburg College President Dr. Tonjua Williams looked forward to having future discussions with the faculty.

According to Florida statutes, if a public employer—such as SPC—refuses to recognize an employee organization, the union has the right to file a petition with the Public Employees Relation Commission (PERC) for certification. This petition must be accompanied by signed statements from at least 30% of the college’s faculty, to indicate a “desire to be represented for purposes of collective bargaining by the petitioning employee organization”.

And according to a Monday press release shared by UFF, this threshold has been met, and more.

It should be noted that this year’s attempt to unionize SPC faculty isn’t the first. In 2016, SPC faculty gathered authorization cards from over 50% of the college’s faculty to submit to the Florida PERC. Magnani, who was involved in that effort, said the faculty was unsuccessful in 2016 as a result of several factors. For one, it didn’t have as large an organizing committee that it does now, she said.

Magnani and other UFF-SPC faculty leaders like associate professor Manoli Gerakios, who volunteered to return to the SPC campus to teach this fall, told CL they’re optimistic about getting voluntary recognition from Dr. Williams and securing their seat at the negotiating table.

“We're really hopeful that they will voluntarily recognize us,” Gerakios told CL. The college administration has the opportunity to recognize their union at any point in the election process up to the election day. That election date won’t be determined until PERC defines the bargaining unit and handles a few more administrative items.

And doing so, Gerakios said, would be “a huge boost to morale”. His colleague, Professor Nappi agreed. “It would be a fantastic gesture of goodwill,” he said, if the college administration were to recognize their union. “It would mean a lot to us to work with them. That's all we've ever asked for is to be included.”

St. Petersburg College faculty looking for a seat at the table

According to UFF-SPC faculty leaders, what they’re really looking for is a seat at the negotiating table. Forming a union isn’t intended to be a combative effort, they said, but rather an opportunity for collaboration with the college administration. Having union representation would allow SPC faculty to negotiate with the college and at a legislative level as a collective, legally-recognized voice.

As demonstrated by academic unions statewide, a faculty that is unionized gains the power to negotiate for things such as annual salary raises, tuition reimbursements, affordable healthcare benefits, paid sick leave, and fair office hour requirements.

And as state colleges and universities face likely budget cuts for the next fiscal year, forming a union would give faculty the ability to sit down with the administration and negotiate how those cuts could impact faculty members and their colleagues.

With the pandemic, faculty is also looking to be part of the conversation regarding the administration’s reopening process. UFF-SPC faculty said the college administration has generally been pretty good about providing accommodations for faculty members who weren’t comfortable with the idea of returning to brick-and-mortar teaching on-campus.

“They've been great. They've kept everyone safe. And for that, I applaud them,” Professor Anthony Nappi told CL. “Now… for how we start going back to campus, we just want to be included in that conversation.” A wave of academic organizing

In recent years, Florida has appropriately been referred to as a “hotbed” for academic organizing.

Altogether, the United Faculty of Florida (UFF) now represents over 20,000 faculty members and graduate assistants at 28 state colleges and public universities across the state, in addition to faculty at Saint Leo University. UFF represents full-time faculty members. The union is a local affiliate of the Florida Education Association.

SEIU Faculty Forward, a union that represents part-time faculty, has also been hard at work organizing thousands of Florida faculty members in the last few years. This includes adjuncts at SPC and other state institutions like Valencia College in Orlando—where adjunct faculty members have protested pay cuts, lack of job security, and unsafe working conditions over the course of the COVID-19 pandemic.

Higher education—like many other public sectors—has been hard-pressed to accommodate the economic impact of the coronavirus. Namely, what we know of its effects on the budgets of Florida’s chronically underfunded public education institutions.

You might recall the University of South Florida (USF), for example, toying with the idea of gutting its College of Education’s undergraduate programs earlier this year, earning a strong, oppositional reaction from the general public. The university has since reconsidered.

And unfortunately, these cuts from the state aren’t new. Public education advocates and educators have long bemoaned Tallahassee’s failure to adequately invest in their teachers, students, and institutions. Between 2008 and 2017, state funding for Florida’s higher education institutions fell 20%, according to the Center on Budget Policy and Initiatives.

But according to UFF-SPC faculty leaders, it was really the moves made by the college administration earlier this year that drove their unionizing effort.

“If those pay cut announcements had not been made in July, we probably wouldn't be here right now,” Magnani said.