St. Petersburg Mayor says no to Monday curfew, as Tampa continues another night on lockdown

Yesterday, Tampa Mayor Jane Castor instituted a curfew from 7:30 p.m. to 6 a.m. that is in effect until further notice. 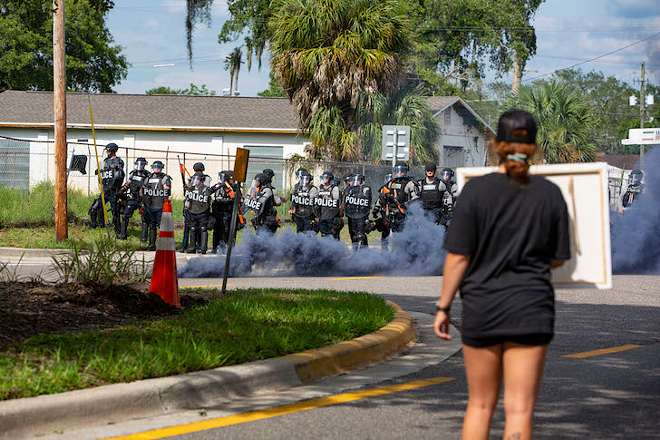 Protests following the death of George Floyd continued into Sunday evening in St. Petersburg, and while the earlier St. Pete gatherings were peaceful, police officers were reportedly involved in a late night skirmish, involving thrown projectiles and some damaged property.

“Tonight, protesters threw a water meter cover, bottles, rocks at the officers in front of @StPetePD HQ,” Mayor Rick Kriseman wrote in a tweet. “Smoke (not tear gas) was dispensed. Protesters were told to go home. 14 ppl arrested. Our officers have been exceptional, allowing & facilitating peaceful protests for 2 days.”

Despite the incident, St. Petersburg Communications Director Ben Kirby told Creative Loafing Tampa Bay that as of now, no curfew will be put in place on Monday.

“Right now we are not going to implement a curfew,” Kirby said in a text message. “Mayor will continue to monitor events and consult with Chief Holloway on this issue. Will let you know if anything changes.”

Yesterday, Tampa Mayor Jane Castor instituted a curfew from 7:30 p.m. to 6 a.m. that is in effect until further notice.

The announcement came after protesters and officers with the Tampa Police Department clashed Sunday near the Tampa Police District 3 Station in College Hills and again near Curtis Hixon Park in downtown Tampa.

“What I saw last night was not a call for voices to be heard, ideas to affect change, or ways to shine a light on inequality,” said Mayor Jane Castor in a statement. “What I saw was shameful, what I saw was heartbreaking. And what I saw did not reflect our community and the values we share. We stand in solidarity with all of the peaceful protests happening in our city and around the country.”

“Almost all of them were from Hillsborough and Pinellas County,” said Dugan, “and ranged from burglary, battery, disorderly conduct and violation of the curfew.”

While three vehicles and one building was damaged “people who are causing property damage, are very few,” explained Castor. Castor also stated that the City of Tampa curfew will continue through Monday evening. “In an abundance of caution, we are going to go one more evening with a curfew,” she said.