We admit it: Tampa's got a lotta strip joints. Here are some of the best. 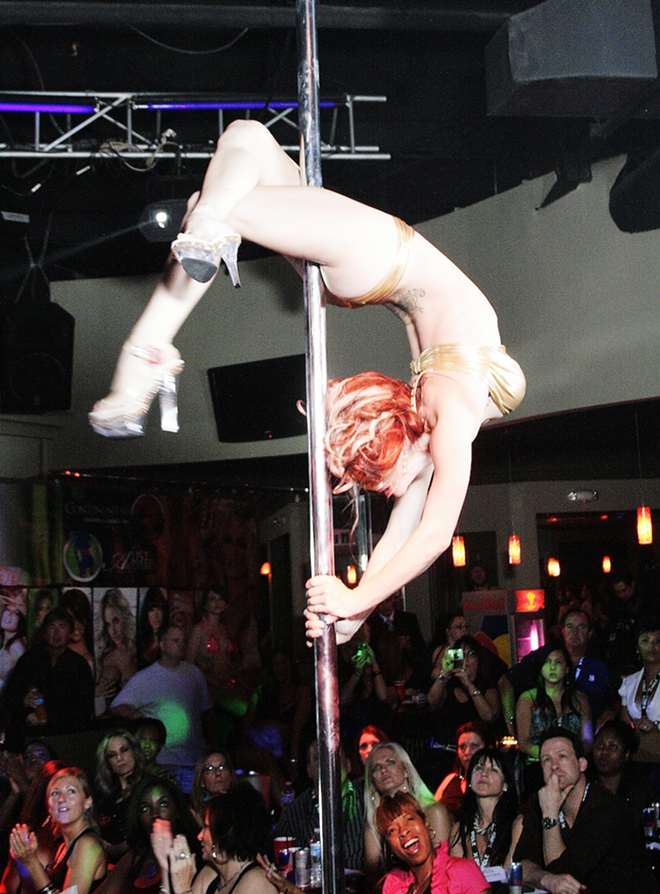 Shawn Alff
POLITICAL POLE-STER: A dancer bends her way through the Miss Pole Champ USA competition at The Pink Pony in Tampa.

Tampa may be known for its strip clubs, but if you don’t know where to go, you could end up being accosted by a one-armed stripper in her third trimester. Don’t be a victim of halfway houses doubling as nude clubs. Be the guy who knows where locals go to hang out with the hottest, and least clothed, dancers in Tampa.

You may recognize the spaceship perched atop the club from Stanley Kubrick’s 2001: A Space Odyssey, or you may just recognize the spaceship as an icon of Tampa’s adult nightlife. The interior is small for being the most popular nude club in town, but the tight quarters offer more friction between you and the performers. For the RNC, 2001 will be open 24/7 the weekend before, and the days of the convention. Along with secluded “skybox” rooms, the management will also offer a side entrance with a covered tent for patrons wishing to protect their identity. Discounted covers and free dances in the spaceship for delegates with proper credentials. 2001 is also the flagship club for StripClubsOnline.com, which offers live streaming video of the dressing room and mainstage so you can see who is working before you arrive. 4.8 miles from the RNC. Full nude/No liquor. 18+. Plenty of parking in back. 2309 N. Dale Mabry, Tampa. 813-877-6406, 2001nude.com.

The only topless bar in Tampa my wife actually enjoys. Living up to its billing as a gentlemen’s club, Penthouse offers a lounge atmosphere where you can relax with friends over drinks, eat a steakhouse meal, and of course enjoy some female company. For the RNC, Penthouse will offer shuttles and executive car services, seven private VIP areas for groups, and between 90-100 dancers each day. 5.7 miles from the RNC. Topless/Liquor. Limited parking. 1801 West Shore Blvd., Tampa. 813-288-9200, thepenthouseclubtampa.com.

Although the exterior looks like an immense warehouse, the interior is what most people hope for when they envision going to a strip club: several stages, a few bars, and a multitude of dancers. For the RNC, a handful of adult stars like Britney Amber, Tia Cyrus, and Lelu Love will be feature dancing at The Gold Club and Emperors Club just down the road. 5.1 miles from the RNC. Topless/Liquor. 21+. Plenty of parking. 6222 E. Adamo Drive, Tampa. 813-622-7899, tampagoldclub.com.

The most celebrated club in Tampa because of its charismatic and outspoken owner, Joe Redner. Mons has the reputation for hosting the hottest dancers in town, and, as the legend goes, it is the birthplace of “the full-contact lap-dance.” With all of its acclaim, most visitors are shocked by how small it is and how lap dances are not performed in private rooms. 4.9 miles from the RNC. Full nude/No liquor. 18+. Limited parking. 2040 N. Dale Mabry, Tampa. 813-875-2762, MonsVenus.com.

• Most clubs have between a $10 to $20 cover, though inflation may set in during the RNC.

• Strategies for getting a discounted cover: Flash your RNC credentials, have a military ID, say you’re part of the Bubba Army, go during lunch or before peak hours, call ahead for shuttle services and VIP deals.

• In topless clubs, dancers are technically required to wear pasties, but you will not notice these thin strips of gauze unless you’re looking for them.

• Nude clubs generally have a higher cover and often require you to buy a nonalcoholic beverage for the price of a cocktail. However, many nude clubs allow reentry for patrons who need to escape these “alcohol free zones” to recharge in their waiting limo or parked car.

• If you happen to run into Tampa Mayor Buckhorn at one of these establishments, tell him you’ve been assiduously observing the “six-foot rule.” He will laugh heartily.