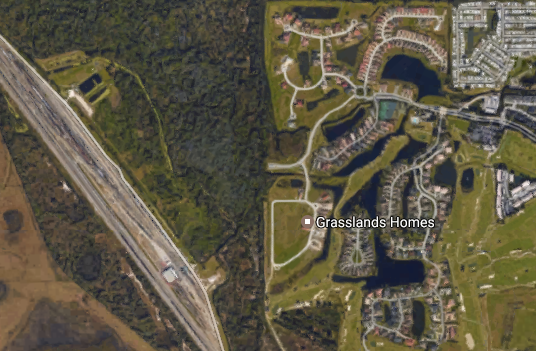 Screen grab, Google Maps
A few of the thousands of homes in southern Lakeland that are built on former phosphate land.

The suit claims that the company knowingly sold "reclaimed" phosphate mine land that had dangerously high levels of radiation that drastically raise the risk of many cancers, including lung and thyroid. Prior to the development of 1,400 acres of land that now comprise the Oakbridge and Grassland areas, the law firm representing the plaintiffs claims, the U.S. Environmental Protection Agency found 11 to 21 times the acceptable amount of ambient radioactive materials.

The national firm Lanier Law joined the case after attorneys for the plaintiffs approached them with the suit.

“We reviewed it and thought that the case had a lot of merit and the people were wronged, the people who bought the homes,” said Richard Meadow, national mass tort director for Lanier Law Firm.

Also litigating on behalf of the plaintiff is Tom Girardi, who is perhaps best known for his work on the case against Pacific Gas & Electric over water contamination, which inspired the film Erin Brockovich.

What makes the case particularly compelling, Meadow said, is the type of poisoning residents may potentially be dealing with.

“This one is unique in that we're talking about gamma radiation here, and not necessarily like the chromium or some of the other ones we've dealt with,” he said. “It's like getting x-rays every day or something like that.”

Attorneys working on the case unearthed a EPA "Florida Phosphate Initiative" from May, 2003, a document previously unavailable to the public that highlighted the potential dangers of building homes on land above radioactive phosphate industry waste.

Among talking points outlined in the once-Freedom of Information Act-exempt document:

The main concern is that people may be exposed to unsafe levels of radiation in cases where residential dwellings have been constructed over former phosphate mines. Phosphate mining results in the redistribution of radium-226 (Ra-226), a radioactive contaminant of the phosphate ore, from buried deposits to the landsurface. The radioactive contaminant emits gamma radiation which has been determined to be a cancer-causing agent. The Ra-226 eventually degrades into Radon gas which is another known carcinogen. Preliminary estimates indicate that approximately 40,000 residential dwellings have been built over former phosphate mines in Polk County, Florida. Many of these homes are believed to have elevated levels of Ra-226 or gamma radiation that exceeds the EPA's safe standards.

In 1975, the lawsuit claims, the EPA warned then-governor Reuben Askew of the radiation levels in buildings constructed on reclaimed phosphate land, and that Drummond may have known that as far back as 1975, but did nothing to protect the health and safety of incoming residents. As a result, the suit continues, residents not only face potentially toxic air and water, but also declining property values.

The plaintiffs are seeking recompense that includes medical monitoring and aid as well as financial compensation for lost property values and relocation should they choose to leave.

And given how much land is mined for phosphate in that part of the state, Meadow said he also hopes the case will help set a precedent to guide the way the industry deals with spent land — assuming EPA regulators will actually enforce regulations under a Donald Trump administration.

“We may be dealing with a fangless or toothless EPA going forward, which would be really bad for everybody," he said. "But hopefully this will shine some light on this, bring it into daylight.”

Yet part of the reason Drummond may not have been held accountable in the first place was that the phosphate industry has wielded influence on lawmakers — and still does, if campaign finance records for politicians like Agriculture Commissioner (and likely GOP gubernatorial contender) Adam Putnam are any indication.

Instead of heeding warnings from the EPA as well as the U.S. Department of Energy, the plaintiffs say, the phosphate industry, including Drummond, "pressured the EPA (both directly through state and/or federal legislators) to cease its investigation into the risks of reclaimed phosphate mining lands." As a result, the suit continues "in 2014 the EPA officially abandoned its plans for further assessment and potential remediation of the contaminated mining areas under the federal Superfund program, including those comprising the Oakbridge and Grasslands developments."

Drummond appears to be out of the phosphate business, but in addition to real estate, Drummond now carries out extensive coal and oil mining and extraction in the U.S. and Central America. A spokesperson for the company was not available for comment Tuesday.

Central Florida is home to some of the biggest phosphate mining operations in the world, and the industry says that without it, food production as we know it would cease. After all, phosphate mined in Florida becomes fertilizer for mass-scale agricultural operations.

Concerns over the industry's impact on the environment are ever-present. Fertilizers cause harmful algae blooms when rain washes some of the product into waterways. Mining the raw material strips the natural landscape and the wildlife habitats therein completely bare. Plus, its radioactive byproduct is on its face concerning for many people.

The March 10 lawsuit comes months after Mosaic Company, which has mined for phosphate extensively in central Florida, was found to have not told the public about a large sinkhole that opened up underneath a radioactive gypsum stack, putting the fresh water naturally stored underneath at risk for contamination.

Even though the industry is under scrutiny from the environmental community, many elected officials in Florida look the other way as the industry seeks permission for new mines.

Given the advantage big business has in battles over public safety and policy, it's unclear how a lawsuit like the one filed Friday will fare in the long run. It's likely that a powerhouse like Drummond could afford to fight the suit indefinitely, while residents of the developed phosphate lands might not be able to keep fighting.

But attorneys for the plaintiffs say they're equipped to fight back.

“One of the reasons [the plaintiffs'] lawyers approached us is, we have a lot of resources ourselves,” Meadow said. “We can battle them. We're not intimidated by that.”