Rock 'n' roll, without the sex and drugs. 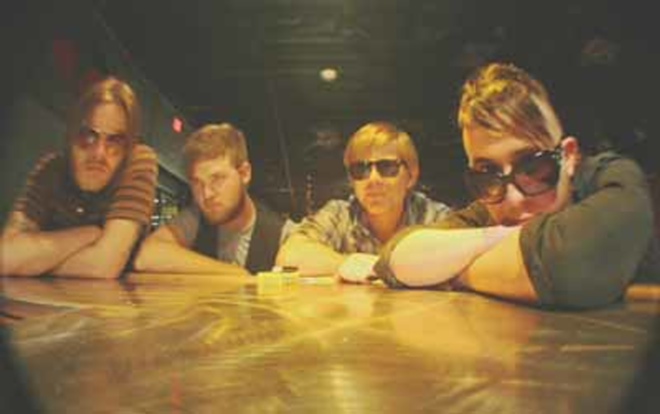 Shanna Gillette
TABLE FOR FOUR: Tailgunner Joe and the Earls of Slander will rock the State Theatre this Saturday at SMASH 10.

Tailgunner Joe and the Earls of Slander are that rare young local band that simply wants to play rock 'n' roll. That's their preferred term for what they do, and it's fitting. Rockabilly, punk and alt-country figure into the mix, but at its core, we're talking rock 'n' roll, replete with the energy, swagger, look and all the other trappings — except, that is, for the backstage debauchery or foul language, but we'll address those topics later.

"I like to call it rock 'n' roll on moonshine," says Zakk Bosserman, the band's bearded, vest-wearing guitarist/vocalist. Singer/bassist Travis Moore and drummer/vocalist Cannon Lee, who are brothers, and guitarist Kyle Pierce are also seated at the table. It's around 10 p.m. on a Tuesday at Crowbar in Ybor City, and the four young men — Moore, age 24, is the oldest by two years — are here for $5 liter night, as they are every Tuesday after rehearsal in Lutz.

On Saturday, the Earls of Slander join a roster of eclectic local talent at the debut "Creative Loafing In Concert Presents" show at the State Theatre in St. Petersburg. Last month, the band had its most memorable gig to date, opening for psychobilly luminary (and Hank Williams II bassist) Joe Buck at a packed Dave's Aqua Lounge. "That was the best reaction we ever got," Lee says.

Moore, puffing on a cigarette while on his second liter, adds: "Some drunk guy gave us a hundred-dollar tip."

Two years ago, Moore and Lee played contemporary Christian music. Lee still plays at a church every Sunday, where he collects $75 for his weekly efforts. Bosserman also performs at a place of worship, but gratis. In fact, all the band members can be found at church every Sunday.

"We were the Christian version of Crosby, Stills & Nash," Moore says of he and his brother's former group. "We played acoustic music with lots of harmonies.

"But we wanted to start a rock 'n' roll band," he adds with a grin.

Tailgunner Joe and the Earls of Slander played their first gig at nearby Orpheum last year on April 26, the singer recalls. History buffs will recognize "Tailgunner Joe" as the nickname that the disgraced, commie-baiting Senator Joseph McCarthy claimed he earned while serving in the Marine Corps. "We're not particularly enthusiasts of McCarthy," Moore says. "I just heard it in history class and thought it sounded cool, especially with Earls of Slander, which comes from the Chuck Palahniuk [book] Haunted. We're all libertarians, except Zakk."

Bosserman shrugs, looks as if he's about to clarify his political position, but ultimately remains mute on the subject.

All of the band members are originally from Tampa and are in college or recently stopped attending. As kids, Moore and Lee were home-schooled. Moore, the elder, now attends USF, where he's pursuing a degree in English Lit. He also works at Ron Rose Productions recording studio. Lee attends HCC and plans to eventually transfer to USF for a degree in advertising. Kyle Pierce studied classical guitar at HCC and is a couple credits short of earning a bachelor's from USF. He pays the rent by performing in Rock a Doo Wop at the Marrakesh Theater in Busch Gardens. "That's the name of your Busch Gardens band?" asks a surprised Bosserman. Pierce's face reddens. Bosserman studies music at HCC and delivers pizza for Domino's. "They're really flexible with my schedule," he says.

Besides being similar in age and pursuing higher education, something else unites the band members: Christianity. Although you would never catch any of them sermonizing on stage and their music is clearly secular — with the song "That's Alright" criticizing the policymakers who wrongfully sent our troops to Iraq — the musicians are upfront about their faith and subscribe to a certain moral code. For instance, on their MySpace site, it reads: "The members of the Earls of Slander are proud to be unusual and countercultural, yet nonetheless devout, Christians. All attend and volunteer at their churches on a weekly basis."

On stage, the guys try not to swear, and Moore won't sing about getting it on (he and his brother are both committed to not having sex before marriage). "It's not like we go around thumping a Bible," Moore says. "We smoke, we drink, and we don't judge what other people do."

"We can support someone like Joe Buck or Hank Williams III's music," Lee explains, "but not their ethics or morals."

So it's basically a hate-the-sin-not-the-sinner thing?

Bosserman relates a story that illustrates the band's ability to get along with even rock's rowdiest characters. "After our show with Joe Buck, he came up to us and said: 'I like you guys, but you should say 'motherfucker' more,'" Bosserman says with a chuckle. "It was the funniest thing."