'The airlines make so much money, and we don't get any of it.' Workers at the Tampa International Airport (TPA) spoke out yesterday against low wages and poor working conditions that could leave their families hungry while others are enjoying their holiday meals.

Outside of TPA’s drop-off and pick-up terminal, members of the Service Employees International Union (SEIU) 32BJ and their supporters stood around a holiday-decorated table lacking any food as part of a “turkey-less” Thanksgiving dinner. The visuals were meant to symbolize the poverty the workers face as they keep one of the nation’s busiest airports running.

Gladys Perez, who’s worked at TPA for 18 years and is currently a security officer, stepped up to TV news microphones at the press conference to talk about the struggles she faces.

“My job is very important, I keep the airport safe and secure for employees and passengers,” Perez says. “But I’m not feeling appreciated, we don’t even have enough sick days if we get sick.”

Perez made $9.05 an hour for 18 years until the recent minimum wage increase in Florida. Now she makes $10.40 an hour, but her struggles persist. Perez says she was told by her employer that if she gets sick for a long period of time, she should apply for unemployment. Perez, 70, said she had heart surgery, and had to use vacation time to recover. Her family depends on her and she doesn’t have enough savings for retirement.

“I hope I can put dinner on the table for next week. But it's always a struggle, especially around the holidays,” Perez says. “Airlines and their contractors are making billions of dollars profit off of our backs. We need them to step up and ensure we are earning a living.”

Perez spoke as part of the SEIU’s national week of action at airports across the country, where workers are calling attention to poverty wages and a lack of benefits at airports, including Florida airports like TPA and Orlando International, where another worker demonstration with the union will be held later this week.

The airline industry, which received a $54 billion bailout through the CARES Act, has been scrutinized for record delays, cancellations, massive layoffs, and labor shortages during the COVID-19 pandemic. Meanwhile, SEIU says that many airlines and their contractors are squeezing workers while refusing to make airport jobs more competitive by offering living wages and even the most basic benefits like paid sick days.

“Unfortunately, Tampa [International] Airport is a modern day sweatshop,” said 32BJ SEIU Florida director Helene O’Brien at Tuesday’s press conference. Some TPA workers, she said, make as little as $7-$10 per hour, plus tips. Some service jobs listed on TPA’s website, outsourced through companies like SSP America, list positions with a starting rate of a mere $5.63 per hour for bartenders and servers. Tampa airport CEO Joe Lopano, on the other hand, earned a salary of $509,000 last year, and was recently approved a raise.

Airlines rely on airport contractors to provide key services like wheelchair agents, baggage handlers, skycaps, and other positions. These contractors compete vigorously with each other to see who will win the lowest bid contract, which has resulted in plummeting wages and disappearing benefits.

Creative Loafing Tampa Bay reached out to TPA for a response to SEIU and the worker’s claims.

People from all walks of life came out to support the workers on Tuesday. Spokespeople from gubernatorial candidate Rep. Charlie Crist and Rep. Michele Rayner’s offices, plus Senate candidate Eunic Ortiz, St. Pete City Councilman-elect Richie Floyd, Reverend Andy Oliver of Allendale United Methodist Church, and organizers from the Party for Socialism and Liberation and the Democratic Socialists of America spoke out and stood by in support.

Floyd, who serves as a delegate to the West Central Florida Labor Council for the Pinellas County teachers union, spoke on the need to ensure that money coming into TPA from the latest $1.2 billion infrastructure bill is directed to the airport’s essential workers.

“This money needs to be directed towards the people who work and run these places. It needs to be directed towards the people that get up and come here every day and make sure that things run smoothly,” said Floyd. “[We want to] make sure that when we're investing in our infrastructure in America, we're investing in the workers, because workers are a vital part of that.”

Under the new Infrastructure bill, Florida will receive about $1.2 billion for infrastructure development for airports like TPA over the next five years. Last spring, Tampa International received about $80 million under the Coronavirus Aid, Relief and Economic Stimulus (CARES) Act. According to the Tampa Bay Times, this was largely used to offset debt and losses. Subsequent COVID-19 relief packages provided millions more to the busy airport hub, which TPA spokesperson Nipps told the Times last December would help them stay current on debt payments, maintain normal operations, and retain airport staff.

But with some TPA workers making subminimum wages, community allies underscored that low wages and little to no benefits isn’t enough.

“We are experiencing one of the worst housing crises of our times right now here in Tampa Bay, and it's more expensive in Tampa to get an apartment than it is in other cities like San Francisco, LA and New York,” said Ortiz, a former communications director for SEIU who’s currently running for State Senate in St. Petersburg.

Tampa Bay is reportedly on track to become more rent-burdened than cities like Los Angeles; research shows this burden falls disproportionately on people of color.

“No one that works 40 hours a week should live in poverty. No one should have to choose between putting food on the table and paying their rent and providing for their future for their family,” Ortiz added.

While U.S. Rep. Crist could not make it to the event, a letter read by his Veteran Liaison and Constituent Advocate Jon Rowles said that the pandemic has “painfully revealed” just how important frontline essential workers are to the country and economy.

“Despite this, I know that many of these essential workers still make poverty wages, even as we draw closer to the holiday season, in another likely wave in this pandemic,” Rowles read.

The letter added that Crist still strongly supports raising the federal minimum wage to $15 an hour, as he’s championed since his first year in office, as a cosponsor of the 2017 Raise the Wage Act.

Reverend Oliver, a stalwart supporter of human rights for all in Tampa Bay, closed out the press conference with a prayer that focused on standing in solidarity with people “made invisible by exploitation.”

“So woe unto you airport executives, when you blame the laborers you have exploited for the inequity you have created,” Oliver prayed. “Oh God, raise up more prophets like Moses and Dorothy Day, and dismantle capitalistic financial profit that destroys our human family.”

Florida 32BJ SEIU director Helene O’Brien told CL there are over 1,000 low-wage workers at TPA. Several spoke out on Tuesday. Anthony Sanders, who works full-time as a wheelchair attendant and baggage handler, was one of them. 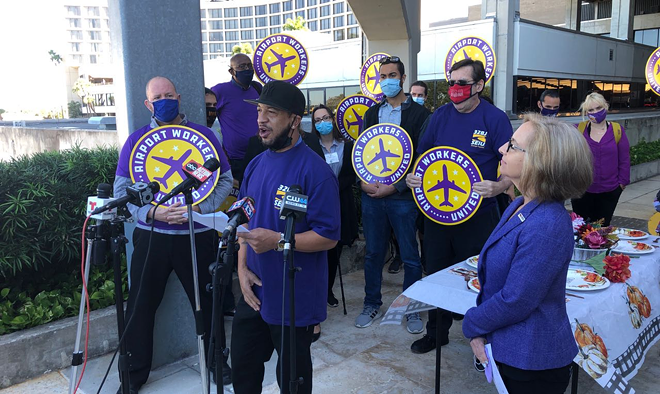 He’s worked at TPA for three years. Today, he makes $7 per hour as a tipped worker. “The amount I make isn’t enough to get by,” Sanders said Tuesday morning. With the recent rent spike, he saw his rent go up to $1,500 a month. He was unable to afford this on his own, and he lost his car. Last year, he was laid off for two months.

After moving into a hotel for a brief time, he now lives with a roommate, which helps with Tampa’s cost of living. Still, he’s found himself working through injury. He can’t afford to miss the opportunity to make tips, which are unreliable at best. A former security officer from New York, Sanders hasn’t been a member of a union before. But he was eager to join the Airport Workers United campaign.

“I like my job. I love taking care of passengers, but it's not fair how low the pay is,” Sanders said. “Passengers depend on us to physically help them and make sure they're getting to their flight safely. Our work is important so we deserve better.”