Peltier is an Indigenous prisoner still being held despite calls from around the world for his release.

On Jen. 31, local activist groups will host an event calling for political prisoner Leonard Peltier to be freed after more than 44 years of wrongful incarceration.

The event will be focused on education regarding Peltier's  imprisonment—he's currently being held just about an hour north of Tampa, at Coleman Penitentiary—along with current Indigenous affairs and ongoing issues at WMNF Community Radio. It's set to take place on Jan. 31 at 7 p.m. at The Chattaway, located at  358 22nd Ave. S. in St. Petersburg.
Peltier is an American Indian Movement (AIM) activist who was  at the Pine-Ridge Reservation in South Dakota when the FBI invaded the land and started a conflict with members of the Oglala Lakota Nation in 1975, including women and children. The Indigenous people resisted, and a firefight ensued. The conflict resulted in the death of several Natives and two FBI agents.

There was never any proof that Peltier killed the agents, but in a trial that's known around the world for its unjust proceedings, the FBI's coercion of witnesses, and multiple instances of tampering with evidence, Peltier was convicted in 1977. He's been in prison ever since. At 76 years old, his health is deteriorating while the U.S. ignores calls from around the world demanding his release.


"This clemency campaign may be the last best opportunity for Leonard Peltier to be released," said Sheridan Murphy, President of the International Leonard Peltier Defense Committee. "Former US Attorney for the Northern District of Iowa James Reynolds, who supervised the prosecutors of Peltier has urged Biden to grant Clemency to him, admitting his office 'shaved corners' and they 'could not prove Leonard Peltier committed a crime on the Pine Ridge Reservation'."

"Save WMNF", Florida Indigenous Alliance (FIA) and the Border Patrol Victims Network will co-host the event. They'll be showing the documentary, "Incident at Oglala" which dissects what happened the day the shootout occurred in vivid detail.

"The film Incident at Ogala was funded by Robert Redford and created by Michael Apted in 1992, when it was hopeful President Clinton might grant clemency," Murphy said. "Hundreds of armed on duty FBI Agents protested at the White House and Peltier remained incarcerated. While the documentary is thirty years old, the facts remain the same."

Save WMNF will also talk about issues that they see occurring at Tampa's WMNF Community Radio, including Two Worlds Indigenous Radio being "forced off the air," they wrote on the event flyer. Rob Lorei, founder of WMNF who was abruptly fired last year, will speak at the event.

Ana Maria Vasquez from the Border Patrol Victims Network will discuss the injustices that the U.S. commits at the border, and what the group is doing to resist the needless violence and death there.

"In unity there is strength!" Save WMNF wrote on a flyer for the event, "All people's together!" 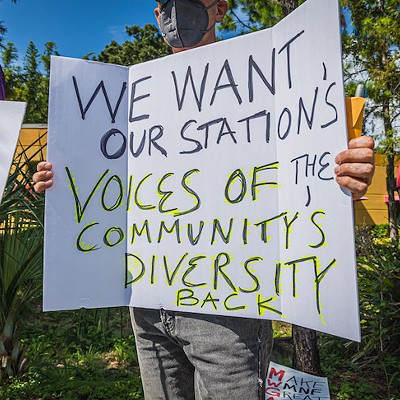