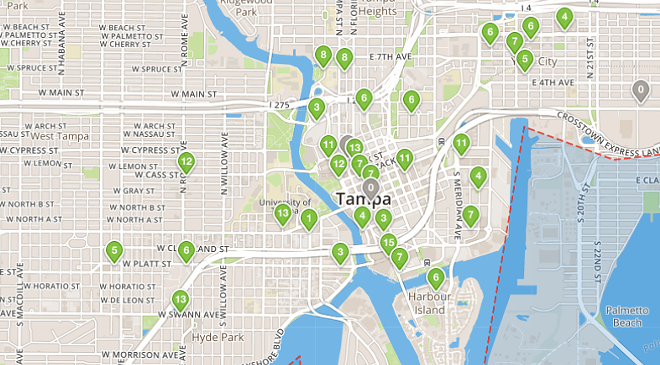 Screen grab, CoastBikeShare.com
A map of the bike stations where subscribers can rent bicycles via an automated system.

Not everyone's a Redditor, but a hell of a lot of people are. And when something makes the front page of the popular social media site, i.e. lands within the top 25 posts, it's kind of a big deal. At least among the millions of people who partake, anyway.

That's why it was so cool to see a post about Tampa Bay — a positive one about something really cool, no less — hit the front page.

On Sunday afternoon, a Redditor with the username ReimannOne posted an animated map showing all of the rides taken using the city's Coast Bike Share bicycles over the course of a day.

Each dot on the map represents a rider, and since the animation is sped up to quickly depict rides over the course of the day, each dot looks like a tiny, but fast, ant speeding up and down Tampa's bike-friendly thoroughfares.

Over 1,000 rides transpired over the course of the day, which was sometime in October of 2016, according to u/RemainnOne.

Coast Bike Share landed in Tampa in late 2014, and most spots where users can find a bicycle are clustered in Ybor City and Tampa Heights as well as downtown and south Tampa. While the gif doesn't offer street names, examined against the map of bike stations on Coast's own website, the most rides appeared to take place in the downtown core.

Coast has gained popularity on both sides of the bay; St. Pete installed its own in late 2016.

As the entire region has struggled to beat a bad rap for its gridlock, pedestrian injuries and fatalities and lack of alternatives to driving, the bike shares have been a bright spot for advocates of expanded transportation options for residents and tourists alike.

Since taking office in 2011, Tampa Mayor Bob Buckhorn has pursued complete streets, more bike lanes and other measures that make it safer and easier to get around by bicycle or on foot.

“It’s always great when you can see firsthand the transformation of a city into one that is pedestrian and bike friendly,” said Mayor Bob Buckhorn through a spokeswoman. “This gif is proof positive when you invest in sidewalks, bike lanes, and complete streets, people will take advantage of all of the options Tampa has to offer.”

Using data shared on the Coast website, the user originally posted the gif to r/Tampa (a subreddit dedicated to all things Tampa), but another user recommended that he or she cross-post it to r/dataisbeautiful, a subreddit where users post images and gifs that creatively depict fascinating trends and other aspects of life using datasets.

In other words, it makes hard statistics look interesting to the most right-brained among us.

And it's got more than 12.7 million subscribers, so a ton of people likely saw the post.