PSL Tampa Bay and the Tampa Bay Coalition for Women's Rights will hold a march on July 16 to advocate for reproductive rights. 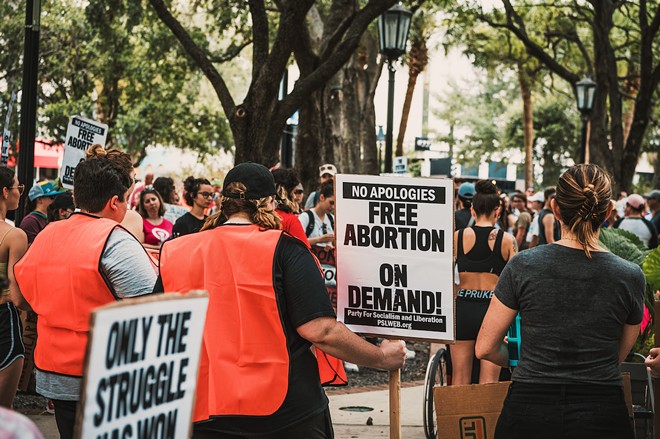 Photo by Chandler Cullota
Nearly three weeks after the U.S. Supreme Court overturned Roe v. Wade, the landmark case that constitutionally protected abortions in the first trimester, Tampa Bay activist groups have shown no sign of lowering their voices on the issue.

The "Moms for Liberty" national summit will take place at Tampa's Water Street Marriott from July 14-17, and Tampa Bay's Party for Socialism and Liberation (PSL) and the Tampa Bay Coalition for Women's Rights plan to protest the event on July 16 at 10 a.m.

The protest will first congregate at Lykes Gaslight Park (241 E Madison St.) and march to the Marriott at 505 Water St.

According to a July 8 post on PSL Tampa Bay's Instagram (@psltampabay), "Moms for Liberty is a fascist organization that organizes nationally for book banning, not teaching Black history in schools, not requiring vaccines or masks in schools, and any mention of LGBTQ people in schools."

After participating in Pride Month, Marriott will now host Tampa conference for anti-LGBTQ group: Conservative group Moms For Liberty will be hosting their national summit at Tampa's Water Street Marriott in downtown later this month.

The post additionally called Tampa Bay abortion advocates to "rally our communities in defense of all its members. With the Supreme Court eviscerating abortion rights, the time to fight back is now."

At the same time as the Tampa protest, the Women's Advocacy Movement of Pinellas (WAMP) will organize a protest at St. Petersburg's City Hall in support of the Tampa march.

According to a post on WAMP's Instagram (@womensadvocacymovementpinellas), the protest will feature speakers, give attendees an opportunity to learn about other activist organizations in the area and "take to the streets and march in solidarity with our friends across the bay."

According to a press release, the conference will be emceed by State Representative Anna Eskamani and Vice Mayor for the City of Coral Springs Joshua Simmons to "convene grassroots activists, elected officials, and party faithful" and "coordinate future strategies to shift Florida blue."