A private funeral is set for March 30 in Largo. 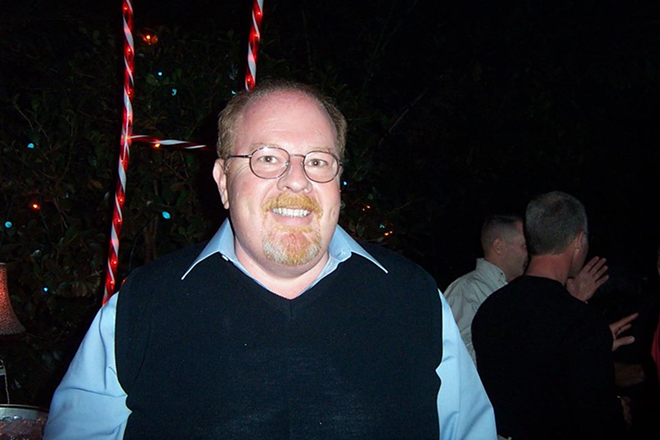 On Friday, Tampa Bay realtor and gay rights advocate Robert Barnum passed away after what friends describe online as a brief fight with COVID-19, the respiratory disease caused by coronavirus.

“I found out this morning one of my friends I’ve known the longest here in Tampa Bay passed away yesterday from COVID-19,” Todd Fixler, a nurse and Creative Loafing Tampa Bay photographer wrote. Fixler worked for Barnum from 2003 until about 2008 and transitioned to nursing after the real estate market crash.

“Robert Ernest Barnum had so many direct influences on my life from my career in real estate to the home I live in. He was always there for advice and never steered me wrong in anything. He was family," Fixler added. I’m going to miss him very much.”

Steve Kornell—St. Petersburg’s first openly gay City Councilman—wrote that Barnum, who friends called Bob, “did so much to help so many people in our community and I will never forget everything he did for me. It is a sad day.”

Kornell stepped down from City Council last year. A representative for David C. Gross Funeral Home in St. Petersburg, which has been entrusted with the care of Barnum and his family did not immediately have Barnum's age to share.

Other friends described Barnum as a strong supporter of St. Petersburg’s police department whose wealth of knowledge and helped a countless number of people navigate difficult situations, especially when it came to real estate.

Barnum—who served on the board of CASA, Pinellas County’s official domestic violence center—helped broker the 2015 sale of iconic St. Petersburg gay bar Georgie’s Alibi, which served as a safe haven for the gay community in the many years before St. Petersburg fully embraced LGBTQ members of its city.

"Gay bars up until the Alibi were basically on a dirt road — no lights, no shine," Barnum, told the Tampa Bay Times after the sale.

A private burial is planned for March 30 at Largo’s Chapel Hill Memorial Park.

Barnum, who moved to Tampa Bay from Long Island when he was 16 years old, was a realtor in Pinellas for more than a quarter of a century. He moved back north to earn a business degree at New York University and returned to the Bay area in 1972. Barnum also worked closely with St. Petersburg’s Chadbad Jewish Center, the local theater scene and and once served as an adjunct professor at the University of South Florida.

CL Tampa Bay has yet to independently confirm that Barnum tested positive for the coronavirus.