Lynn Hurtak and Tim Burke have been working at home, together, for the last decade. 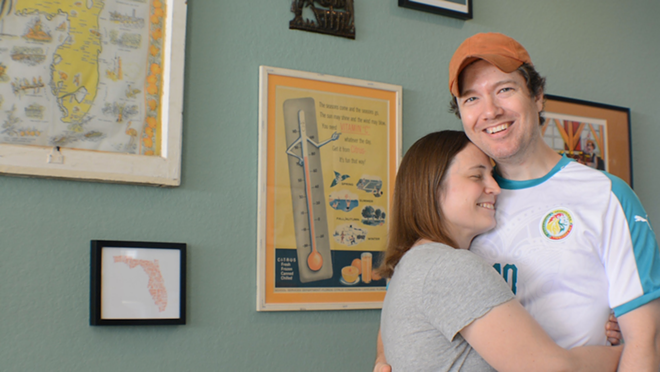 Like many couples in Tampa Bay, Lynn Hurtak and Tim Burke face the daunting prospect of being holed up together for at least the next month-and-a-half. The difference is that they’ve been working from home and eating most of their meals at la casa for the last decade. Finding success in that situation is kind of like trying to locate a pack of toilet paper these days, so the couple hit the ignition on “Surviving The Stuck-at-home Lifestyle,” a video series they’ve been kicking the tires on for some time.

There are three clips so far, and while it’s nice to learn how Hurtak and Burke—an editor and evaluator for aid programs, and a national media consultant, respectively—make a kickass meatballs and Cuban pork roast, what’s more impressive is the way the couple calmly, and quickly, talks through a collaborative process that clearly took a lot of compromise and flexibility to figure out. I watched the first segment three times, I’m not sure that I’m on my way yet, but I did get to quickly pick Hurtak and Burke’s brains as the world seems to fall apart around us.

It was comforting to learn that they’re just as angst-ridden as we are, but that they, too, can think of a few things they’ll appreciate more once, and if, we can all get through this.

Lynn, you mentioned how John Darnielle provided you an immense amount of comfort in this dark, dark time. The videos with you and Tim are obviously sunny, but I did want to ask both of you about your moods day-to-day as the fallout unfolds around you. On a scale of 1-10, how heartbreaking or angsty is all of this to both of you? What are some of the new things keeping you up at night?

Lynn: John Darnielle has been my go-to for everything for a long time. I mean, who hasn’t been listening to “This Year” on repeat? Probably a 7. I’m worried about the pain this is causing everyone—from those sick and dying, their families, people losing their jobs, businesses going under... The world will never be the same again and that’s scary. I was really angsty last week, but I’ve dialed down my social media interaction to twice a day. It helps. I also don’t watch TV, ever (I leave that to Tim).

Tim: 8. My job used to require me to be exposed to right-wing media all day, which was really harmful to my emotional health. Now, we’re all exposed to the bad decisions being made by elected officials across the country—which ramps up an anxiety I never really had before. I’ve gone considerably gray in about four weeks.

Tim, you mentioned how nice it is to be married to someone who is organized and prepared for everything. Outside of the badass Cuban pork, what else are you bringing to this relationship?

Lynn: He’s the one who can get anything done. I mused the other day that I wish we could get our books out of boxes (from moving 4 years ago!), and he sketched out a plan and ordered lumber to build a bookcase, which he’s never done before. We work really well as a team.

Will you continue the series through the stay-at-home order?

Tim: Yes. We’ve been talking about doing something like this for a while, and this provided the motivation to do it.

You two are obviously well seasoned to work at home, but what do you miss the most from the before time?

Lynn: I miss all the interaction with my neighbors and friends. We had a ton of neighborhood activities we had to cancel, and that’s been a big blow.

Tim: Meetings? That sounds deranged. But, yeah, meetings. At tables, with other people sitting at the table with you.

You’re also both very active in your communities. As far as local response to the pandemic, what do you think isn’t getting enough attention? Is there anything that’s leaving you really uneasy as far as what Tampa Bay might look like when everyone else is allowed to go back to work? Anything about the local response that’s really impressed you?

Tim: The arts community, without immediate financial attention, is going to collapse across the Tampa Bay area. A decade of state funding cuts had all of us on the edge every year to begin with, and now that most of us have had to cancel multiple productions—if not the rest of our seasons—the arts options in Tampa are about to dwindle unless we get some help.

That having been said, I think a number of local officials have stepped up to provide strong voices; more importantly, people in the neighborhoods are doing what they can. From the Heights Citizens Bicycle Brigade delivering local restaurant meals, to Kristen Brown with TRIBE planting pinwheels across the Heights, to Michael Guinn & the volunteers with MRG 3D printing face shields for local health professionals, I’ve seen people all around me doing things to move us forward.

Lynn: I’m concerned about those who have lost their jobs and may lose their housing. We need rent/mortgage help for everyone right now. There are a lot of people who won’t have work to go back to. What will we do for them? I agree the immediate local response has been heartening. I’ve also been super impressed by the local papers and their ability to cover news so quickly—even with layoffs and limited print schedules.

Lastly, this thing is changing all of us. How do you think it’s already changed you and how you’ve come to view and appreciate your community?

Lynn: For the last ten years, my work has focused on West Africa. But in the last week I’ve been thinking about how I can transition to working within this community, to strengthen the ties we’ve already developed. It’s made me want to dig in deeper.

Tim: I’ve learned that we have a lot of friendly neighbors who spend all their time inside; this pandemic, ironically, has driven them all outside to walk their dogs, or exercise, or whatever—and I’ve learned I have a lot more interesting people around me than I ever knew, and hope they decide to keep coming outside after this is all over.