The expansion is expected to be completed in 2025.

The expansion will include a changing exhibits gallery, and a two-story, multidimensional habitat that will feature puffins. It will also feature an outdoor California sea lion exhibit that will be the only such exhibit on the West Coast of Florida.

A significant African penguin habitat will also be part of the outdoor expansion to increase the Aquarium’s impact on the survival of the species. Sea lions, penguins and puffins are part of The Florida Aquarium's $40-million expansion plan: The project will begin early next year and is expected to be finished by 2025

“The Florida Aquarium is a community treasure and its impact goes far beyond our region’s borders,” said Shaw in a press release. “Having a vibrant, thriving cultural attraction like the Florida Aquarium enhances our quality of life and places us on an international stage. I have no doubt the support for their continued growth will be well received by the community. The Channel District is proud to be home to The Florida Aquarium and I appreciate the opportunity to serve in this role as they bring a new vision to the neighborhood, the region and the state.”
click to enlarge 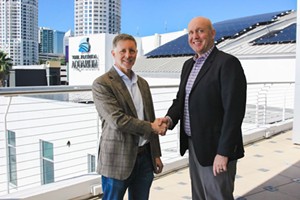 via The Florida Aquarium
Darryl Shaw and Roger Germann


Shaw is currently developing Ybor City’s Gas Worx – a mixed-use project that will link downtown Tampa, the Channel District and the Latin Quarter.

The Florida Aquarium’s project, which started this month, is expected to be completed in 2025. It is the largest campaign since the opening of the aquarium in 1995.

“This expansion will bring rich and lasting experiences and education to our neighbors and visitors from across the world and supports our purpose to save marine wildlife in our backyard and throughout Florida,” said. Roger Germann, Florida Aquarium’s president and CEO/