Firefighters say they're struggling, after pension delays and benefit issues leave them without income. 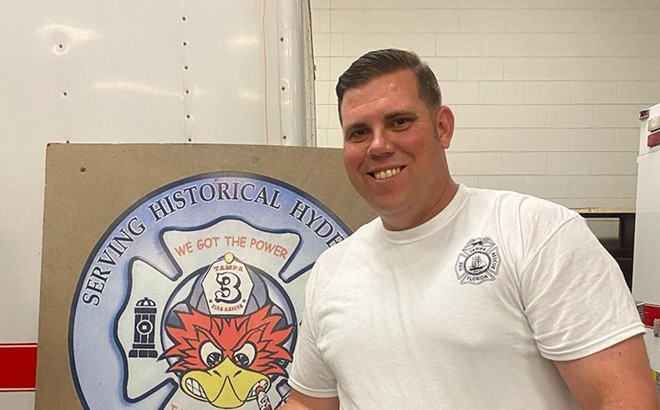 Before he was released from his duties Joe was extremely dedicated to his job, Jennifer told council. He spent holidays away from his kids and missed birthdays, along with other important milestones. He's visited members of his crew in the hospital and donated to firefighters in need. He helped fellow firefighters build their homes. Their family's connection to the department ran so deep that Jennifer and Joe were married at the Tampa Firefighter Museum.

Jennifer tried to control the emotion in her voice as she read her statement during last Thursday's meeting. She brought her children Joey and Mallory, who bounced around the public comment area of city hall while she spoke.

Joe wasn't able to attend the meeting, because he was out searching for employment, so Jennifer went to plead with city council to honor her husband, who gave so much to the fire department.


"Even after Joe was hurt on the job, he was working late duty at the downtown office," Jennifer told city council. "He spent his days assisting with firefighter grants for Tampa. He didn't just sit around."


At 40-years-old, and after serving for over 18 years, firefighting was what Joe knew best. Now, he has to support his family, along with pay for their health care, which costs his family $1,600 a month since he lost his job this year.

There's a lifeline waiting for the family in the form of his pension from Tampa Fire Rescue, but he's received nothing, because of a hold-up with the pension board.

Jennifer was one of several people who spoke at the city council meeting, from families of firefighters, to current and former firefighters. While she didn't go into details about Joe's injury, and CL did not receive a response to a request for comment from Joe, she was one of many who decried lack of support for those injured on the job and delayed pension benefits. The firefighters also described faulty equipment and dangerous working conditions that have led to injuries.

"Everybody who has spoken here, administration, city council, everybody agrees that these people have given everything for this city," said councilman Luis Viera. "And I think everybody has a sense that they deserve more."

City council members asked Tampa Fire officials, who were attending the meeting virtually, why the firefighters find themselves in such a dire position.

"If the individual gets hurt on a job we continue to provide benefits, as well as medical support for the individuals when the physicians decide that this individual is no longer to operate in the capacity of being a firefighter," said Tampa Fire Rescue Captain Barbara Tripp.

When it is determined that the employee can no longer operate as a firefighter, that's when they apply to the pension, Tripp said. She said that the worker's compensation benefits are still there for them during this time, and they're still accruing their paid vacation time, sick time, as well as their  pension.

Tripp said that each case is different and depends on  what the doctors determine for each person, but that that the worker's comp support for firefighters typically ends a year after a doctor determines they can't fulfill the normal duties of a firefighter.

"We just go through the policies and procedures set by the city of Tampa," Tripp said. "As well as the collective bargain agreement."

But Jeff Allred, newly elected vice president for the local International Association of Firefighter's Union said that the process is not working for those who lay their lives on the line for the City of Tampa.

He says that it's taking six to eight months to get paperwork back from the pension board when firefighters apply.

“I know Joe Menendez asked,” Allred said. “He applied for the pension a couple months ago. It took eight weeks for them [the pension board] to say they hadn't gotten him his paperwork back. He got his paperwork and an hour and a half when he called the doctors himself, so the bottleneck is there.”

Tanja Vidovic, who left the fire department last week after working light-duty due to an injury she received, spoke out about several issues at Tampa Fire Rescue, and placed the blame on Tripp's administration.

She told city council that historically, when an injured firefighter does not recover, they are  given 12 months of compensation up until their pension kicks in. This makes it so there's a seamless form of income for the firefighters.


"This is not how the administration is working things they are not honoring that and I understand it is her right to not honor it. But it doesn't make it right." Vidovic said.

Now, Vidovic says some firefighters are being dropped off worker's comp after six months, and their pensions are taking up to 18 months to kick in, leaving them in situations like the Menendez family finds themselves in.

Vidovic said that after years of wearing gear that didn't fit correctly, the belt portion didn’t get tight, because it was made for larger men. The belt was supposed to fit tight on her lower back. It didn't get tight enough, which moved all the weight to the shoulders. After 13 years of service, she ended up with a shoulder and neck injury.

In 2015, Vidovic filed a discrimination charge with the U.S. Equal Employment Opportunity Commission against Tampa Fire Rescue, claiming three captains solicited her for sex and retaliated against her for standing up for gender equality in the workplace. In 2016, she sued the City of Tampa for harassment, discrimination and retaliation by her superiors and coworkers and was immediately fired. In 2017, it was ruled that she was discriminated against, and that the city had retaliated against her when she complained. Vidovic began work with Tampa Fire Rescue again in 2018, and was released from Tampa Fire due to her neck injury last week.

Kelly Austin, director of human resources and talent for the City of Tampa referenced a collective bargaining agreement, state law and cases of malfeasance as reasons why worker's compensation for those injured on the job stands as it is.

"We have to abide by all policies, practices and procedures as prescribed by chapter 440 and the Florida Statutes, in addition to what we abide by in our collective bargaining agreement," Austin said. "There's no action by any employer that can change what is laid out in chapter 440 as it relates to entitlements of medical payments and indemnity payments. So we can't do anything different than the law prescribes."

Chapter 440 describes state rules for workers compensations benefits and limits, but it does not explain the unfolding pension delay issue with Tampa Fire, nor does it explain the claims that some firefighters are being dropped from worker's compensation early.

Every city council member expressed concern about the situation, and asked for an update from Tampa Fire Rescue at the last city council meeting of the year, on Dec. 16.

"You know these these firefighters give so much to us," said Tampa City Councilman Guido Maniscalco. "They sacrifice every time a call comes in, when they put on their gear to serve the community. We should be treating them better."