Just one thought went through his mind: “I have to get this thing off of me.”

Juan Carlos La Verde was mid-stroke during a swim in Lake Thonotosassa when an alligator’s mouth shot out of the murky water and clamped down hard around his upper body.

As soon as the gator’s jaws were around him, the 34-year-old firefighter felt teeth pierce the flesh on his head and chest, and his head made a loud “pop” sound.

The large adult gator had closed its mouth with a total pressure of around 2,000 pounds and swiftly crushed a part of his skull and broke his jaw.

Waves of pain rushed across his body, but a burst of adrenaline overrode the pain.

As La Verde and the gator struggled in the warm green waters of the Eastern Hillsborough County lake on Aug. 3, he was closer to death than he had ever been.

But none of the stereotypic hallmarks of death hit him.

His life didn’t flash before his eyes. He didn’t think about never seeing his family again, and he didn’t have time to feel sorry for himself.

Just one thought went through his mind: “I have to get this thing off of me.”

Time slowed down for La Verde.

His 143-pound, 5-foot 7-inch frame struggled against the powerful creature, which he, along with others who saw the gator, estimate was around 12-feet-long.

La Verde remembers feeling the alligator’s scales on its head and then touching its teeth, and noticing that they were fairly blunt.

He got his hands inside the jaws and pulled as hard as he could.  The gator may have been attempting a “death roll,” a maneuver meant to dismember prey, or any animal, including humans, that gators consider a threat. 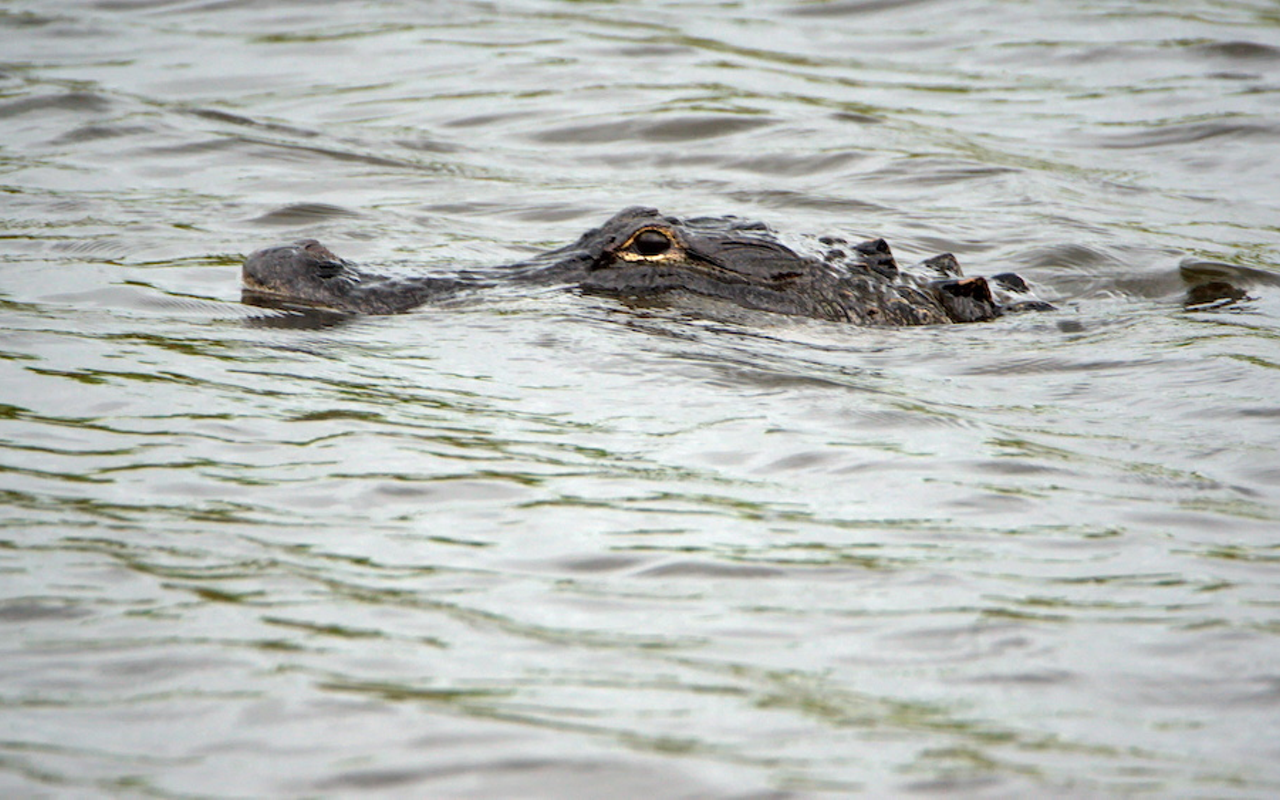 Man bitten in the face by alligator while swimming in Lake Thonotosassa: 'It was pretty gnarly,' an unidentified witness said.

During the crucial moment of the roll, La Verde kept pulling with all his might, hoping to free his bleeding head. And just as quickly as the alligator had attacked, he was suddenly loose.

It was an act of God, he says, and he swam hard for the nearest dock several feet away.

La Verde summoned the energy to pull himself up on the dock, but said it was more like he was lifted by a divine force. Once he was safely out of the water, the pain really set in.

It still felt like his head was being crushed, as if he was still inside the alligator’s mouth. But he pushed himself to get up and walk, and looked for anyone who might be able to help. He prayed to stay conscious and repeated to himself, “Don’t pass out, don’t pass out.”

When a child who lived in a nearby house saw him, La Verde covered his head with his hands to hide the lacerations and blood. He wanted to avoid traumatizing the kid, so he asked if the parents were home.

The mother came out, called 911, put La Verde in her car, and drove him back to Matt Ross, a drone pilot who was there that day to help film La Verde swimming in the lake. The video was meant to be part of a promo for an adventure race event that La Verde’s organization “Defeat X” was scheduled to host in November. 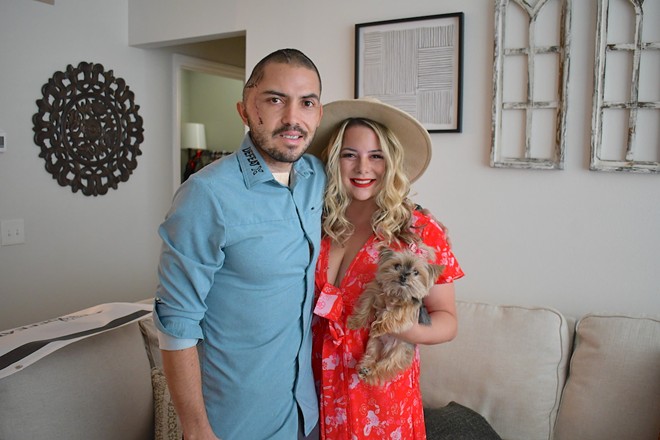 The group helps people who suffer with depression and anxiety by encouraging biking, swimming and other types of outdoor athletics. Defeat X also raises money for foster care organizations, along with cancer research societies during its events. In 2020, La Verde raised $8,000 for the Heart Gallery of Tampa, which helps foster children, during an event where he climbed the equivalent height of Mount Everest on a Jacob's Ladder machine.

Through his work in the community, La Verde, a United States Air Force Pararescue Veteran, paramedic and Oldsmar firefighter, is often called by his nickname, “JC Defeats.”

Ross had just met La Verde that day, and suddenly he was wondering if his colleague would survive. He used an emergency medical kit from his car to help stop the bleeding. Ross was shocked when La Verde said he could drive, calmly got in the car, and took both of them to Knights Griffin Road, where Hillsborough County Fire Rescue arrived. It was two hours before medical staff at Tampa General Hospital gave him pain medicine; La Verde said it "felt like days."

At TGH's intensive care unit, neurosurgeons, along with the Ear Nose and Throat team at the hospital performed a six-hour emergency operation to save his life.

Ross didn’t realize he had caught the moment of the attack on film until he was questioned by Hillsborough County Sheriff’s Deputies, and they reviewed the footage together.

While he was operating his drone to film La Verde’s swim, Ross had looked at his controls for a moment to make sure everything was properly calibrated.

Ross scanned the lake and saw La Verde swimming toward the dock.

“I still can’t believe that he survived that kind of attack. It’s both a tragedy and a miracle at the same time,” Ross said. He gave the video to La Verde so he could decide what to do with it.

The fight with the gator lasted for just a few seconds, but La Verde remembers every moment in slow vivid detail as he recovers from his wounds at his home in Brandon, a suburb east of Tampa.

His mouth is still wired shut as his broken jaw heals, so it’s not easy for him to speak clearly. When asked to take a photo for this story, he was worried that the wiring wouldn't let him smile.

The gator crushed the part of his skull  which protected his temporal lobe, leaving La Verde vulnerable to brain injury, so he wears a helmet when walking around. Before the accident he had long hair, now his head is shaved and there are staples lining the lacerations on his skull.

The hospital first released him last week, but the next day he had to check back in after he passed out at home and hit his head. He was released again on Aug. 14, eleven days after the attack.

More surgeries over the next several months will get him closer to full recovery.

Despite the struggles he’s facing, La Verde maintains a positive outlook, and he’s still focused on his goal of helping others. His organization’s fundraising adventure race event is still his highest priority, although it's been postponed due to the attack.

“There’s so much darkness in this world, that I need to keep up the work to uplift and inspire others,” he said.

He also wants to use his experience to raise awareness about alligator attacks.

While his actions that day were for a positive cause, La Verde admits that he was in a rush when they arrived at the lake, and he didn’t take the usual precautions that are important before swimming in a body of water in Florida.

He skipped scanning the lake by searching around in a water craft for any signs of gators. And he didn’t have a kayak or some other type of vessel nearby so he could get out of the water if he needed to. La Verde was also swimming during nesting and hatching season for gators, which usually runs from August-September.

La Verde and Ross think that the gator’s attack might have been a defensive move to protect a nest, which is a very common reason for alligators to become territorial, because usually, they wish to avoid humans.

However, this year has seen three fatal gator attacks in Florida alone. Victims include an 80-year-old woman in Englewood who fell into a lake and a Frisbee-searching man in Largo.

And overall attacks in Florida are high, with La Verde being the 18th alligator attack in the state this year. Most times, a strike from an alligator requires provocation of some sort, but some attacks are unprovoked.

After La Verde escaped the gator, Florida Fish and Wildlife Conservation and trappers were on the scene to capture it.

“Trapping efforts are ongoing at Lake Thonotosassa following this incident. At this time no alligators have been removed from the area,” FWC wrote in an email to CL. “The FWC and the contracted nuisance alligator trapper are continuing to monitor the area.”

La Verde acknowledged that he was in the alligator’s territory, and that it may have been just protecting its nest or its home. But he says that if the alligator was a nuisance beforehand, and if it will help keep people in the area safe, then he supports the gator being removed from the lake.

Photo via La Verde
The La Verdes on their boat in a lake behind their house, before the alligator attack.
His wife, Christine, a 34-year-old a registered nurse, is helping him recover from his injuries and his co-workers started a GoFundMe to help pay bills.

Christine and La Verde have been together for 12 years and married for nine. At their home in Brandon, they have two dogs, Pinina and Holdenn, who are a source of comfort for La Verde as he recovers.

Christine believes La Verde’s training in the military and as a paramedic helped with his survival. And she thinks his belief in God might have had something to do with it.

“How did he have that instinct, what spoke to him in that moment that told him what to do, and helped him survive?” she wonders.

Despite the pain and the long road to recovery, La Verde is not deterred from getting back to his life before the attack.

He’s a triathlete who believes that seeking adventure in nature is “the closest to God that a person can get,” and says he will continue his pursuit of the great outdoors.

And he looks forward to continuing his work with Defeat X, so he can be there for people in need.

When talking about his inspiration to continue on, his voice becomes full of emotion.

“The most important part of my life is to help and uplift other people,” La Verde says. “So there’s no way I can give up now."