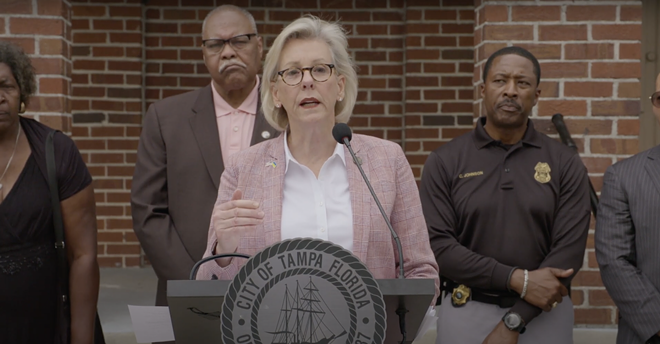 City of Tampa
Tampa Mayor Jane Castor during an April 2022 press conference.
This morning, Mayor Jane Castor said that she will not direct the Tampa Police Department  to arrest individuals who have had abortions which violate the state-mandated 15-week limit.

At a "Coffee with Castor" event at West Tampa's Alessi Bakery, a member of Tampa's Democratic Socialists of America (DSA) asked the mayor if she will direct Tampa Police Chief Mary O'Connor to not pursue arrests of those who have had abortions deemed illegal under Florida House Bill (HB) 5.

"I'm scared to have a kid here. I'm scared to do something that could put my life in jeopardy, or to be arrested for a miscarriage," Sam May said. "My question is, will you talk with [O'Connor] and tell her not to arrest?"

Castor affirmed that arrests are, "100% not going to happen."

"The Tampa Police Department is here to work with the community on the issues that they deem important, to keep the community safe [and] to ensure that people aren't victims of crime, not to go out and prosecute individuals for personal choices that they've made," Castor added. "So that's about as simple as it can get." After Florida's 15-week abortion ban was made into law on July 1, Warren called the legislation "unconstitutional."

In retaliation a month later, DeSantis issued an executive order earlier which  removed Warren from his position, saying he did not fulfill his "duty to prosecute crimes as defined in Florida law, not to pick and choose which laws to enforce based on his personal agenda.”

When asked for clarification on Castor's comments this morning, the city's Communications Director Adam Smith told Creative Loafing Tampa Bay that there was "nothing to add" and that Castor was "clear."

Smith did not address a question about whether or not the mayor was worried DeSantis might invoke state statute to try and suspend her.

Currently, TPD and the Hillsborough County Sheriff have not publicly addressed Castor's preemptive decision to not pursue arrests.

However, at a press conference addressing Warren's suspension two weeks ago, Hillsborough County Sheriff Chad Chronister backed DeSantis' decision and stated, “we are resolved to apprehend the criminals who prey on law abiding citizens in our community, it’s our duty."

"We trust that our criminal justice system, the state attorney, the public defender and courts will fairly adjudicate the circumstances and hold those who are guilty accountable," Chronister added.

Castor's comments come just before a Thursday Tampa City Council meeting where council members will vote on a resolution forcefully supporting a person's right to privacy when it comes to their reproductive rights and decisions, including abortion.

The resolution crafted by city councilwoman Lynn Hurtak and Tampa DSA is not legally binding and outlines support for decriminalizing abortion city-wide. It was drafted in response to the recent overturning of Roe v Wade, and was initially presented to council for a vote on Aug. 4. A vote on the resolution was delayed to this week. Tampa councilwoman calls for legal staff to look at local protections for reproductive rights: Hurtak asked for a report back from the legal team on Aug. 4.

"As a non-binding statement of intent, this resolution is the bare minimum that the Tampa City Council can do to show support for our reproductive rights and bodily autonomy," Tampa DSA wrote in a press release.

Hurtak told CL that she is  thrilled to hear that the mayor said TPD will not pursue abortion cases, adding, "I am so happy that the mayor took this stance, in order to support and defend women in Tampa."