Owner Carlos Hermida says his shop is the first ever mushroom dispensary in Florida and in the U.S. 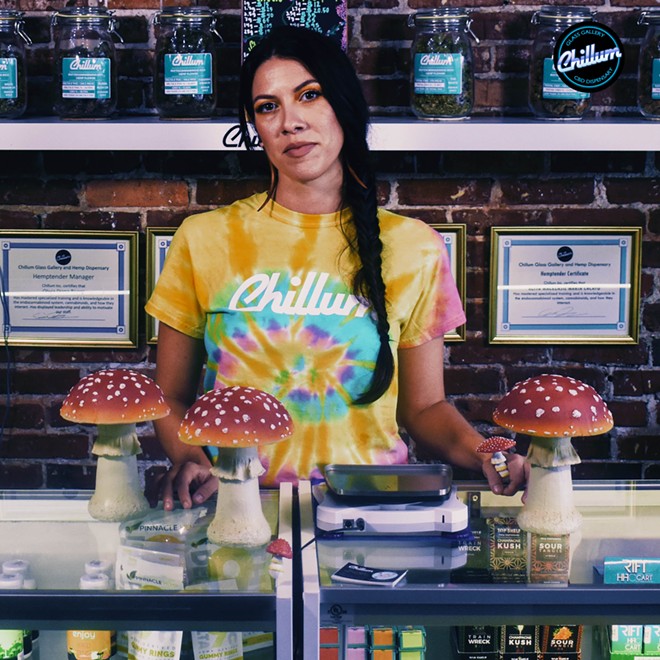 Photo via Chillum
It appears Tampa residents now have a legal avenue to actually enjoy a Phish show.

Ybor City's Chillum Hemp Dispensary, which has operated out of 1714 E 7th St. since 2018, is now known as "Chillum Mushroom and Hemp Dispensary," since it now carries mushroom products.

"The store now stocks different grow kits, spores and mycology cultures, functional mushrooms and yes…. Magic Mushrooms!" said owner Carlos Hermida in a press release. "The catch is these magic mushrooms are legal by federal law, cause these mushrooms don’t contain psilocybin but chemicals that are legal and surprisingly similar… Yes, they make you trip!"

Chillum says they legally can't sell any mushrooms that contain psilocybin, one of the most common ingredients in popular "magic mushrooms", but they can legally sell grow kits and mycelium cultures.

"Psilocybin is still illegal, but the study of mycology is very legal as long as there is no psilocybin present," said Hermida. "That is why we sell mycelium for psilocybin mushrooms. It is our hope that in promoting the study of psilocybin will promote the legalization or all magic mushrooms. That being said, if you express the want to grow these mushrooms, we legally have to deny you service."

Along with a variety of other shroom-related products, the shop also now sells amanita muscaria, also known as fly agaric, which is that bright red mushroom with white spots popularized by Alice in Wonderland and Mario and Luigi. The mushroom is in fact poisonous, and carries psychedelic properties from the botenic acid and muscimol, rather than psilocybin.

Surprisingly, fly agaric is legal in every state except Louisiana, and the shop sells it in multiple forms, including gummies, capsules, or rolled up in a hemp joint, according to its website.

While it has been known to cause intense euphoria, documented side effects from fly agaric include drowsiness, cramps, diarrhea and in rare cases coma or even death, according to the National Library of Medicine.

Inspired by the Vancouver mushroom scene, where it's still illegal but cops don't care and so dispensaries sell it anyway, Hermida says his shop is the first ever mushroom dispensary in Florida and in the U.S.

"I was heavily involved in the cannabis and hemp movement in Tampa Bay and across Florida," said  Hermida, "and I see psychedelics and mushrooms in particular as the next big step toward freedom."

Abi Hettrich, assistant manager at Chillum, says the amount of mushrooms you'd have to consume to get high depends on the product and potency, with joints being the fastest acting and shortest duration and other traditionals like capsules, mushroom and mushroom snacks and providing 4-6 hour highs. "Starting small and working your way up is the best way to go," Hettrich said.