St. Petersburg police have opted not to make the functions available. 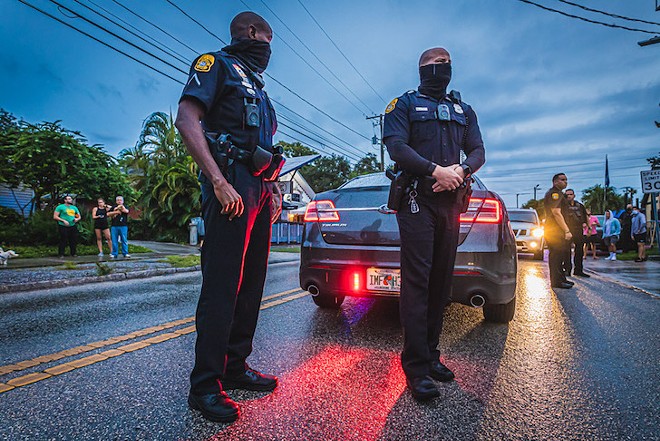 Dave Decker
Tampa police officers in September 2020.
Yesterday, Tampa Police Department (TPD) revealed what it called "minor" changes to the department's body worn cameras, which includes a mute function that has proven controversial in other cities, and a sleep function which makes it easier to turn a camera on and off.

During a Citizen's Review Board (CRB) meeting on April 26, TPD Captain Patrick Messmer from the Professional Standards Bureau announced the changes, which were decided on by TPD Chief Mary O'Connor.

"We made some minor changes to our body worn camera policy...," Messmer told the CRB. "We have tweaked our policy a little bit to make things a little bit more friendly and to ensure that we don't have video that potentially could not be captured."

Messmer went on to explain that previously, when a police officer turned off their camera, it would take time to shut down and reboot. But with TPD's new mute and sleep function, it will be easier for officers to immediately cut off sound, or sound and video altogether to limit certain types of information.

According to Messmer, the functions would be used, "when [an] officer reasonably believes doing so would not result in the loss of critical documentary information, reasonably believes it's necessary to protect tactical or confidential discussions or briefings, or as directed to do so by a supervisor."

Messmer repeatedly said that the function could be used for privacy, especially when an officer is using the restroom, so the officer wouldn't have to turn off the camera and turn it back on.

The problem with these new functions, especially the mute function, is the controversy they've caused in other cities across the country, sometimes in highly sensitive situations.

In 2018, when Sacramento police officers shot and killed Stephon Clark, the mute function was used immediately after an officer involved shooting when officers were discussing the situation.

According to NBC News, the incident, "opened up a new front in the national debate over body cameras: officers' ability to turn off the microphone on the device."

The backup officer responding to the scene in the video posted by NBC News can clearly be heard saying "Hey, mute" before the scene goes silent  and officers discuss the scenario.


Cedric Alexander, a former president of the National Organization of Black Law Enforcement Executives and a member of the Task Force on 21st Century Policing under former President Barack Obama, told NBC that the muting in that situation looked bad for the officers.

A 2018 investigation by 12 News KPNX questioned the Mesa Police Department's use of the mute function, showing that it was used by an officer when he pulled over a city councilman who was driving drunk, and the councilman and his wife tried to argue their way out of the scenario. While speaking with his superior, the officer used the mute function three times.

"If you're muting it for certain reasons then it's a concern of why that would be the case and it raises suspicions from a public viewpoint," Terrill said. "It's hard to say why Axon would incorporate that as a feature."

In November of last year, a federal lawsuit was opened against a Baton Rouge, Louisiana officer who was accused of muting his bodycam before spewing profanity and illegally detaining a woman, causing injuries to her.

Chief O'Connor confirmed to CL over a phone call this afternoon that while the changes were already being asked for by the Tampa Police Benevolent Association before she became chief in February, she ultimately made the call.

O'Connor said the police union cited privacy concerns for officers, but she also had other reasons for wanting the changes.

She said that there are certain triggers, such a police sirens, which activate the cameras at times when an officer is not responding to a scene, as well as other situations, such as entering a convenience store and using the restroom, where an officer might not want the camera on.

"Then, the officer has to power the camera off and back on, and the entire time for the camera to come back on can take up to 50 seconds," O'Connor said. "So, in a situation where an officer is in a restroom in a convenience store, if there's a robbery in progress or something in the convenience store and they've run out of the bathroom, you're going to lose that 50 seconds of coverage, whereas if you're in sleep mode or mute mode, and the robbery is going on, all you have to do is hit the recording button, and it's going to automatically start recording with audio."

When asked if there was a situation like this that occurred at TPD which led O'Connor make the decision, she said, "I'm not 100% certain on that right now," but added that she did a "very lengthy examination" into the changes before making them.

To the question of how much faster the officers will be able to limit recordings from their cameras using sleep and mute mode as opposed to powering them off, O'Connor said she wasn't sure.

When asked about the controversies the changes have caused in other cities, O'Connor said, "I don't really want to speak for policy decisions that other agencies make. I think every agency has to examine the function of the cameras and how it can best accommodate them." 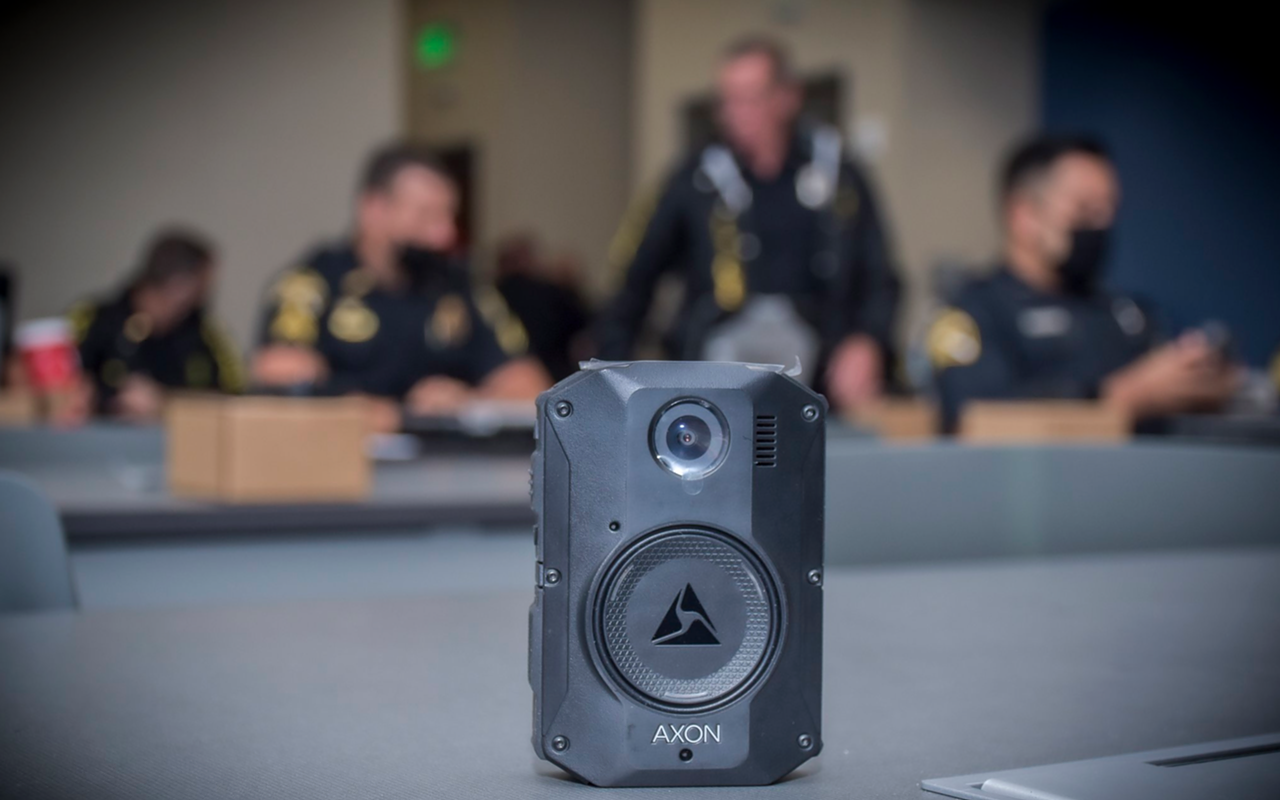 St. Pete Police Department told to CL that it purposefully chose not to use the sleep and mute functions presented by Axon, the company that makes and operates body cameras for law enforcement agencies worldwide, including Tampa and St. Pete.

SPPD Spokesperson Yolanda Fernandez said that the decision was based upon battery usage and officers having to remember when to activate the functions.

"It's a job with a lot of moving parts, officers are responding to complicated situations every day," Fernandez told CL.

Fernandez said that adding the mute and sleep function only complicate what officers have to do in the field, and forgetting to record audio or video in a certain situation could lead to a difficult situation for the officers involved.

CL contacted the company Axon about the controversies the mute functions has caused, but did not receive an immediate response. We will update this post with any new information.

Yvette Lewis, President of the Hillsborough NAACP, said that TPD contacted their office in 2020 after it got federal money to expand a 60-camera pilot program to 650 cameras. But she said the NAACP was not contacted about these new changes.

“It seemed that TPD got these body cams to try to rebuild trust and transparency with the community,” Lewis told CL. “But taking steps like this starts to tear down that trust. Why would they do this in private without contacting us?"

The body cameras were introduced department wide in June of 2020 during the George Floyd uprising, causing pushback from some in the police department. In the wake of the announcement of body cams, former Police Chief Brian Dugan said that officers who didn't like the change could quit. Purchasing the 600 body cameras for TPD cost  $952,000.

The CRB, which has been criticized for lacking teeth, accepted the changes presented by Messmer with little questioning and moved on. Five of the eleven board members were appointed by Mayor Jane Castor, a former chief of police. The other five were appointed by council, and one seat was appointed by the NAACP. In February, Castor's appointment of O'Connor as TPD's police chief caused controversy, with some citing lack of transparency in the search and appointment process, among other issues.

At the presser, she clashed with the media and a city councilman, who questioned a lack of transparency from the administration itself.