Activists and Tampa councilman say independent investigatory powers should not be an adversarial issue. 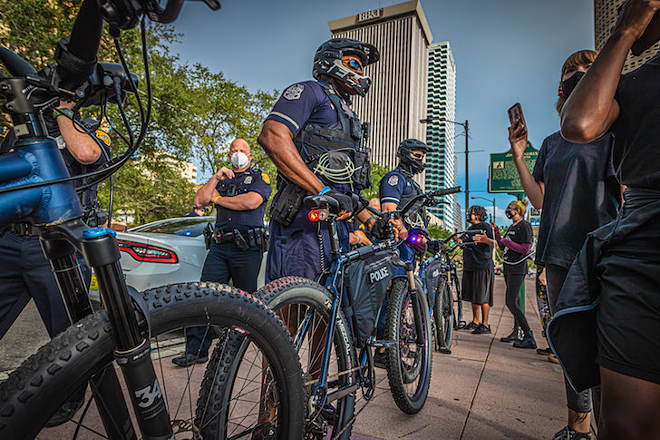 Tampa’s Citizen Review Board—a mechanism for allowing limited civilian oversight of the Tampa Police Department and its operations—could potentially undergo several changes in the near future that would increase the board’s power to oversee issues of concern in the community, according to police reform activists and organizations like the American Civil Liberties Union (ACLU).

Or it might not—depending on what the Tampa Police Benevolent Association (i.e. the Tampa Police union) has to say about it. According to a screenshot shared by Equality Florida Executive Director Nadine Smith on social media, the union is attempting to mobilize “active, retired, and reserved officers” and their friends and family to show up to this Thursday’s scheduled City Council meeting to dissuade the City Council from approving changes to the board.

In this call-to-action, the Tampa Police union asks for volunteers “to support the PBA fighting against the ACLU, who are trying to advance the Citizen Review Board and want to give them more police officers and their discipline. City Council needs to know our officers are against this! John Dingfelder and the ACLU are pushing for subpoena powers and their own investigation board to discipline officers the way Miami already does.”

UPDATE: But despite a marathon meeting, with numerous citizens chiming in about the CRB, the latest draft ordinance proposal from Castor was pulled from the City Council agenda Thursday. What's more is that the council won't review it again until February 2021. On one hand the delay shows that the pressure from groups like the ACLU and Tampa for Justice is working, but activists are also rightfully concerned that the extra time gives reps from the PBA more room to lobby for less independent oversight of Tampa police officers.

James Shaw Jr., a local volunteer attorney with the Greater Tampa Chapter of the ACLU, disputed the union’s fear-mongering. “The CRB would not be able to impose discipline. It can’t,” Shaw told CL on Tuesday. “The law enforcement officers’ Bill of Rights is clear about that. All it would be able to do is be a voice of the citizens and say, on behalf of the citizens, this is what we the citizens think. And then, law enforcement would be able to listen to that or not listen to that.”

Shaw also addressed the dig at Miami’s oversight process. The city of Miami has a Civilian Investigative Panel, but like our own CRB, it doesn’t have the power to impose officer discipline.

Creative Loafing Tampa reached out to Tampa PBA Vice President Darla Portman to confirm that the contents of the screenshot shared to social media came from Tampa PBA. As of publication, she has not returned our request for comment.

The motion to restructure Tampa’s 11-member Citizen Review Board was first put forth by City Council Member Orlando Gudes, a former TPD officer himself, in June, in response to this summer’s resurgence of Black Lives Matter protests. Mayor Jane Castor followed up on that motion by presenting a number of proposed changes, which earned a lukewarm response from police reform activists (of note is that in 2019, Miami officials weren't all that happy with Castor’s performance as Miami Police Department's federal oversight monitor).

Groups such as Tampa for Justice, the ACLU, and the NAACP have been working with the City Council since June to strengthen proposed changes to the board, after some argued that those originally proposed by Mayor Castor fell short of the kind of reforms they believe are needed.

Proposed changes to the board—which include the power to conduct investigations into both closed and open cases with subpoena power, the ability to have an independent attorney, and to allow the majority of board appointments be made by the City Council (as opposed to Mayor Castor), among others—will be discussed in a City Council meeting this Thursday, Nov. 19.

The Tampa Citizen Review Board was first created by executive order in 2015 by then-Mayor Bob Buckhorn, largely in response to three incidents: the deaths of Arthur Green Jr. and Jason Westcott at the hands of TPD officers, and the “Biking while Black” scandal first investigated and reported by the Tampa Bay Times. All three incidents occurred while current-Mayor Jane Castor served as Tampa’s Chief of Police.

Since its creation, however, it’s largely remained “toothless” due to its limited powers, according to local activist-journalist (and CL contributor) Kelly Benjamin of Tampa for Justice, a local police reform group that initially pushed for the creation of the board back in 2015.

Benjamin, who’s contributed to recent efforts to revamp the CRB, expressed concern and frustration to CL about the Tampa police union’s opposition to board reforms. “I think it’s really dangerous when law enforcement tries to paint a picture [that] having a voice and having some accountability is somehow akin to being on opposite sides of things.”

Benjamin argues that increasing the board’s power, for the broader purpose of strengthening community relations with law enforcement, shouldn’t be controversial. “We have a pattern of behavior from the police department that requires some oversight. There has to be an ability to hold law enforcement accountable for the way that they police these communities, and that's really been the thrust of this from the get-go.”

Last month, the Citizens Review Board held a meeting in which they heard from a number of community members, who showed up to demand accountability for the officer killing of Dominique Mulkey, and to speak on their support for increasing powers of the Citizen Review Board to conduct independent investigations of police infractions.

Like Benjamin, attorney Shaw expressed concern about the adversarial way in which proposed changes to the CRB were framed by the Tampa Police Union’s latest message. “I don't like how it presents the [Citizen Review Board] as adversarial, that it's us against the ACLU and John Dingfelder, or that it's somehow pro-police to shield them from the consequences of misconduct.”

“It should be the community coming together to agree upon oversight of this public agency,” Shaw says. “And the way that this presents—it's adversarial, that it’s ‘us’ against ‘them’...it's not the right message, especially not right now.”

City of Tampa spokesperson Ashley Bauman told the Tampa Bay Times that the city government has been working with both the local ACLU chapter and the Tampa PBA on finding ways to reform the existing civilian board.

Both Shaw and Benjamin expressed some wariness about the willingness of the city to approve more robust reforms to the CRB. As it is, the CRB isn’t able to investigate open cases of alleged police misconduct, and that’s still not really on the table.

“The way [proposed changes are] currently written, the CRB wouldn't even be involved until everything is already said and done,” said Shaw. “So as it is drafted right now, it [the CRB] would only be able to review closed investigations, where discipline has already been decided, and then the CRB could weigh in on whether it likes what was done or not.”

Shaw, Benjamin, and others involved in the local coalition to demand robust reforms for Tampa’s Citizen Review Board plan to keep working with the city to increase transparency and accountability in issues pertaining to alleged police misconduct.

City Councilman John Dingfelder told CL on Tuesday that he welcomes the input of all community members—including police officers and their families—in discussions concerning reforms to the Citizen Review Board. “I’m supportive of that in the same way that I’m supportive of everybody who wants to participate. I think the more participation, the better,” Dingfelder said.

However, he also maintained that it’s reasonable and “healthy” for the community to push for a stronger and more meaningful board that has some teeth to it. “We need to be prepared with a board, you know, that has some oversight authority...and then that way the community can feel like they’re involved.”

The City Council will be meeting at the Tampa Convention Center on Thursday at 9 a.m. Community members can submit public comment for the City Council by attending the meeting in-person, submitting a comment online or by calling 813-274-8877 before 9 a.m. on Wednesday.

The meeting will be live-streamed on the City of Tampa Facebook page and the city’s livestream website. It will also be available to view on Spectrum channel 640 and Frontier channel 15.