He was one of seven detained.

Over the last few days Matthew Yampolsky has nursed bruises on his face, cheek bone damage, boot marks on his back, a bruised wrist and finger marks on both of his upper arms.

Yampolsky, 35, was not a protest organizer, but he was among seven people arrested by Tampa police over the weekend (see the moments leading up to his arrest here).

In a press release, TPD said Yampolsky and others were arrested "for violating FL Statue 806.13 Criminal Mischief and POSSIBLY violating City Code 1-21 Criminal Mischief/Damage to city property." The group was in Curtis Hixon Waterfront Park calling out the hypocrisy surrounding a "Bock the Blub" pro-police just a few blocks away.

The worst of the alleged mishandling happened when a deputy slammed his face into the floor three times while he was in a holding cell.

In the moments leading up to that violent exchange, Yampolsky—who told CL that the intake procedure at Orient Road appears to totally disregard the global pandemic happening outside the jail’s walls—said he politely asked a nurse to sanitize a blood pressure cuff as she was completing the intake procedure. The nurse, according to Yampolsky then turned to a nearby deputy and expressed disbelief at his request.

Yampolsky responded by apologizing and asking if he was being rude. That’s when Yampolsky said the nurse told him to calm down.

"Then the sheriff yokes me up and he smashes my body and face against a glass divider wall, puts his elbow in my back, pulls my arms back says, ‘What the fuck you think you're doing?’"

Yampolsky said he responded by saying he didn’t do anything, but was met by more deputies who essentially “hogtied me without ropes” and then moved him to the cell where his face was smashed.

“Once we get into the holding cell, one of the cops that's holding me said, ‘Get on your fucking knees,’ and he shoves me down, with his knee in my knees to force me down. He shoves me down on the ground, and they smashed my face into the concrete jail cell floor,” Yampolsky told CL. “There's a knee on my back immediately. My feet are being pulled to the back of my head kind of like how you would tie up a guy, while they're pushing my face into the ground with all this guy's might."

Yampolsky says he then felt a knee on the back of his neck briefly and was cuffed as one deputy kept his weight on Yampolsky’s head.

“Then the guy that's holding my head down, he curls his fingers back to grab hold of my hair from the left side of my face,” Yampolsky told CL. “And then he picks my head up quickly and then—boom, boom, boom, onto the floor—right side of the face into the concrete floor."

“I wasn’t resisting in any way,” Yampolsky added.

Kai Robinson, another protester arrested the same day as Yampolsky, told CL they heard some of the abuse Yampolsky endured.

In comments to the Tampa Bay Times, Robinson, a 22-year-old transgender man—along with Julien Gibbs—said they were groped and harassed because of their gender identity.

Gibbs confirmed those comments to CL, and said they heard Yampolsky and turned to see what was happening before being told to put their “eyes forward.”

“At this point, they took him into the holding cell and his screams got worse—it was, like, a guttural scream,” Gibbs said. “I didn't know what they were doing, but you could tell that they were abusing him. We were told just to look forward. It was messed up, you feel like you can't really do anything about it at the time because it’s jail.”

CL requested to see video from Yampolsky’s processing on Monday. On Wednesday afternoon, Crystal Clark—Chief Communications Officer for the Hillsborough County Sheriff's Office—told CL that the sheriff only became aware of Yampolsky’s claims through media outlets and “not from the complainant himself.”

“We are continuing to look into this matter, and at this time, despite conducting multiple media interviews, Mr. Yampolsky still has not filed a formal complaint with the Hillsborough County Sheriff's Office,” Clark added.

In a Wednesday phone call with CL, Yampolsky said he doesn’t exactly feel comfortable trying to report abuse to the very entity that abused him. He’s currently awaiting advice on legal counsel from Dream Defenders.

Hillsborough County Sheriff Chad Chronister is up for re-election. No word if this topic will come up at back-to-back Tampa Tiger Bay Club forums scheduled for August 21. 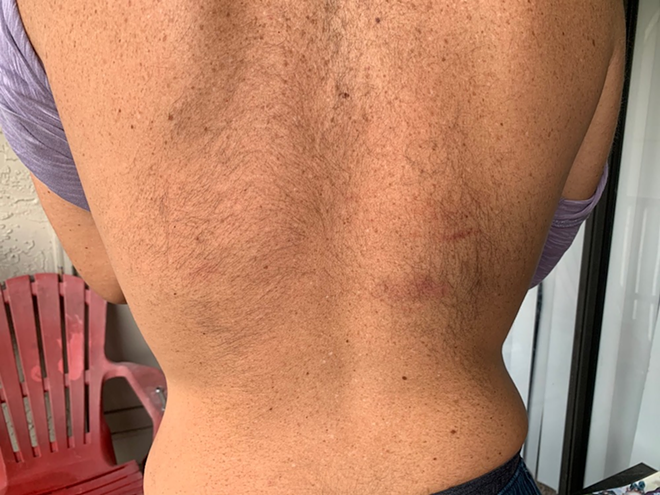