Overall, Tampa was one of 93 of the nation’s 100 largest cities which witnessed decreased rents this month. 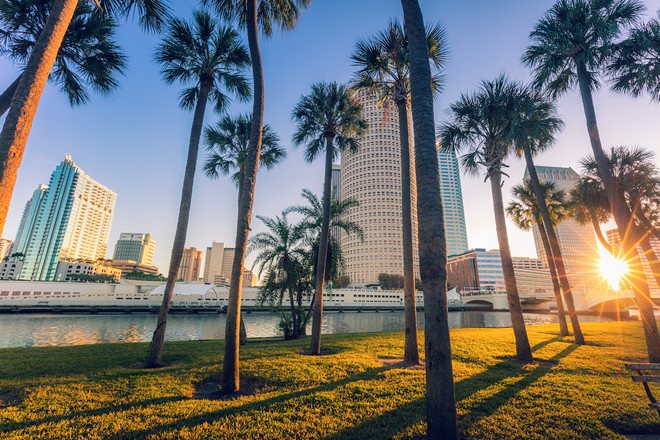 Photo via Adobe
After spiking to record levels over the last two years, Tampa's grossly engorged rental market finally began to cool down this month.

According to a report released today from online rental giant Apartment List, average rents in Tampa decreased by 1.4% month-over-month in November.

Tampa's 1.4% rental decline surprisingly exceeded the national trend, which saw a 1.0% average decrease. Overall, Tampa was one of 93 of the nation’s 100 largest cities which witnessed decreased rents this month.

While November's dip in rents is certainly a relief, it's import to note that Tampa's rental market is still overwhelming bad.

According to the report, while year-over-year rent growth in Tampa currently stands at 2.4% (a significant slowdown from 2021's 33.4% jump), the market is still bloated by 39.1% since the start of the pandemic in March 2020.
click to enlarge 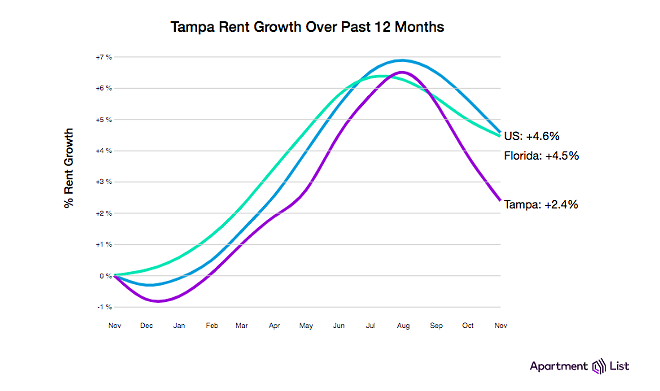 But according to the report, there are worse places to rent in the Bay area than the Tampa. Average rents in St. Petersburg, for example, are currently at $1,345 for a 1 bedroom, but The Sunshine City is also witnessing the fastest annual rental growth rate in the area at 3.2%.

Wesley Chapel, home of a Texas Roadhouse location and a big outdoor shopping plaza, is currently the most expensive area to rent in the Tampa Bay metro at $1,671, but it also saw the biggest decrease in rates this month with -2.3%, and a whopping -6.5% year over year.
click to enlarge 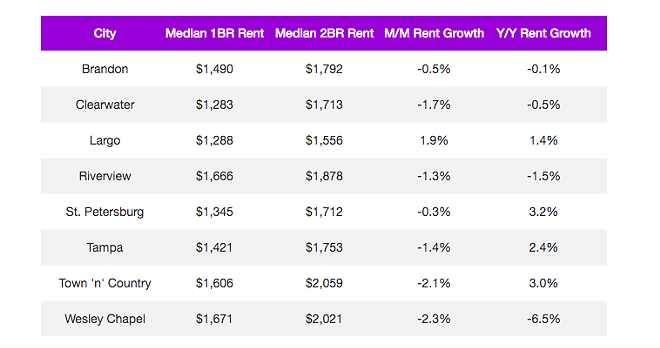 Image via Apartment List
Today's report follows similar trends of cooling rents across the country over the last few months. A report released in early November from Florida Atlantic University, Florida Gulf Coast and University of Alabama, showed that 38 out of 100 measured housing markets across the county experienced a slight decline in rental prices in September.

"It seems that an increase in supply helped relieve the pricing pressure on rental units around the country – and that’s exactly what had to happen," said Ken H. Johnson, Ph.D., an economist in FAU’s College of Business. “The added supply appears to have come from delivery of units under construction, an increase in unit density and the conversion of many Airbnb-type units to long-term rentals."