If the seats are fully reinstalled by February, that will make it two years since Tampa police requested their removal.

Justin Garcia
A Metro Rapid bus stop, which had zero seats for over a year at the request of TPD, had two seats reinstalled in December.
A month after Tampa Metro Rapid's removed bus seats first came to light, some stops have seen piecemeal seating reinstalled, while several stops are still gutted.

The Hillsborough Area Regional Transit Authority (HART)—which initially said the seats would be fully re-installed by early last December—said that there have been setbacks, and is now aiming for the beginning February. That's when HART hopes to have six seats at all of the Metro Rapid stops, said Nikki Frenney, director of communications and marketing for transit organization. 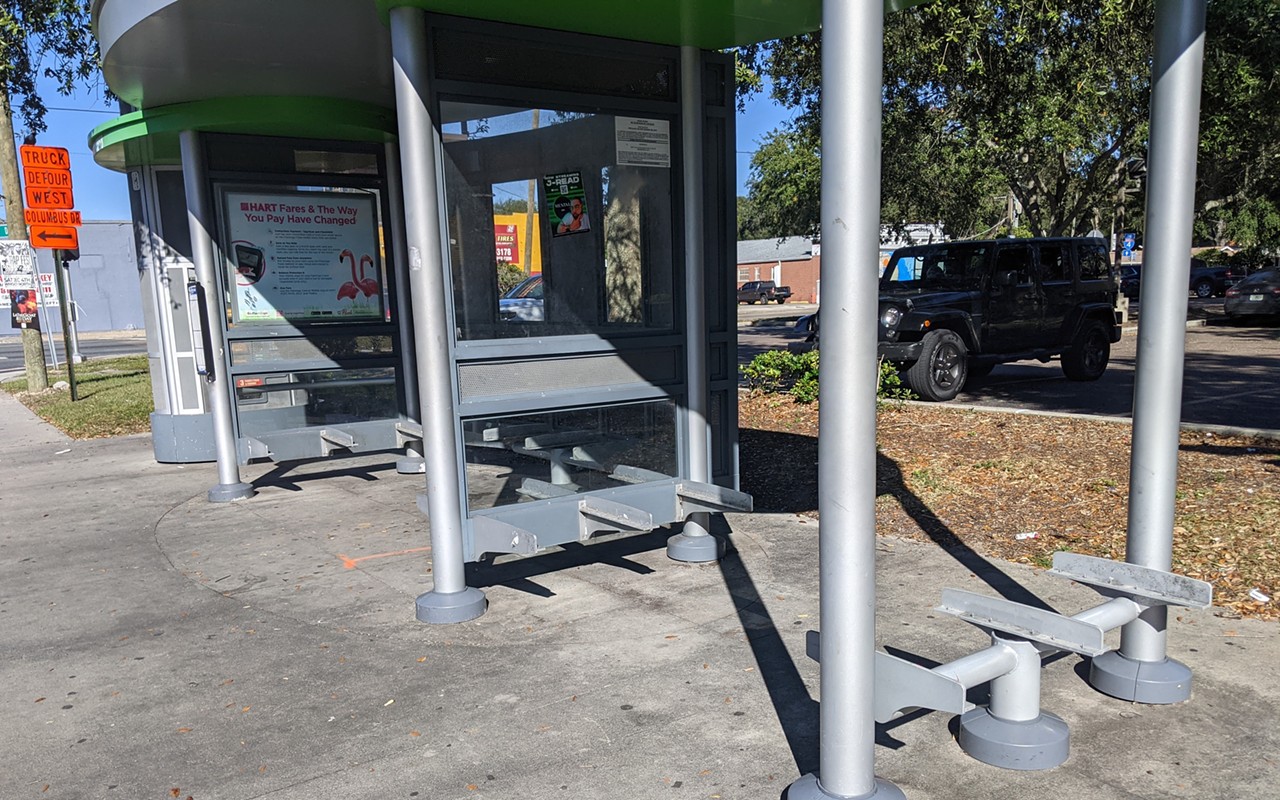 Tampa’s Metro Rapid bus stop seats were removed and transportation advocates want them back: "This is truly a disservice to our residents."

"We've had some delays because of the holidays and people getting sick with COVID and being exposed to it," Frenney told CL. "But it's all hands on deck now to get it done. As of last week, our internal crew has teamed up with our contractor, Insite, to speed up the repairs because we know this is a critical issue for the community."

Five days after the story broke on Dec. 1, HART told CL the seats would be reinstalled by the end of that week, then later pushed that date to the end of December. It said that the Tampa Police Department (TPD) had requested the removal of the seats in February of 2020, citing general crime such as loitering, vandalism and drug dealing.

After initially letting TPD influence a major transit decision for the county, HART said that despite the concerns of the police, the seats would be reinstalled because HART's dedication to riders is "paramount."

"It's all hands on deck now to get it done."

Frenney said that HART's goal is for six seats at every stop by February, but several stops previously had capacity to seat nine bus riders. At some stops where there were previously nine seats, Frenney said it may be harder to get to that number because the metal housings where the seats previously sat seem to be vandalized; they are bent and damaged.

As of today, several Metro Rapid stops up and down Nebraska Avenue are still gutted. Many riders are still doing their uncomfortable balancing act on the metal housings where the seats used to be. Disabled, elderly and other vulnerable people are still forced to stand at several stops. After CL's article about the problem, some bus stops have seen improvements, where two to three seats have been reinstalled, allowing passengers to sit while waiting.

A handful of stops have all of the seats re-installed, but they are few and far between, and some stops still have zero seats.

If the seats are fully re-installed by February, that will make it two years since TPD requested their removal.