The show makes no qualms about analyzing city affairs from a staunchly left perspective. 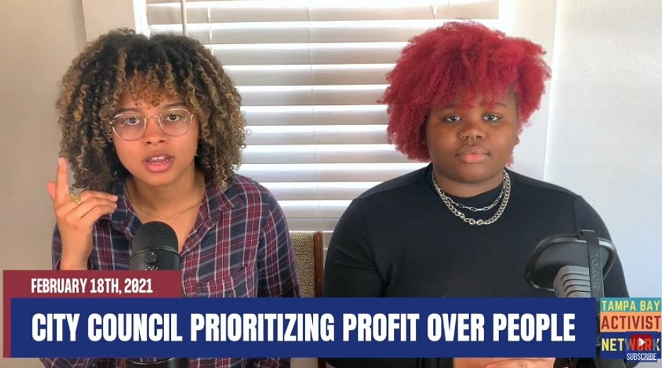 Many people involved in activism experience a defining moment or moments that lead them down the path to social justice. For Meaggan Thomas, founder of Tampa Bay Activist Network and co-host of “Tampa City Council Watch,” it was a combination of events.

Thomas, 26, had her first experience in political organizing working for Amnesty International, where she brought attention to and action around the global refugee crisis. Her mentor at that job passed away, which made her want to carry on the fight for human rights. When George Floyd was killed by police last May, Thomas deepened her commitment to activism, both in Tampa and her hometown of Charleston, South Carolina. It was through the outcry for justice in the wake of Floyd’s death that she met like-minded political thinkers during protests.

Together they formed The People’s Safety Coalition (PSC), which is made up of the Dream Defenders, Restorative Justice Coalition, Black Collective Movement (BCM), Tampa Bay Activist Network (TBAN), Tampa People’s Protest and their allies.

As we near the first anniversary of the tragic killing of Floyd, much of the widespread political upheaval and urgency has become quiet. In Tampa Bay, the daily marches and demonstrations went weekly, then monthly, and are now more of a rare occurrence. But the energy from last year’s unrest continues on through PSC and the leftist media of TBAN.

Before the formation of PSC, Thomas and others often posted solitary videos on Instagram and YouTube, venting frustrations that come with being ignored by city officials after fighting so hard to have their voices heard. But united, they brainstormed and figured out the best way to educate themselves and the rest of Tampa about what’s going on in local government. They decided to create “Tampa City Council Watch” using TBAN’s platform, because there’s so much that goes on at those meetings that people miss out on.

The show makes no qualms about analyzing city affairs from a staunchly left perspective and encourages viewers to get involved in local politics. Clever editing and a professional yet hip and humorous approach to the news offers a stark contrast to traditional broadcasts.

Thomas and her co-host Tori Brown from BCM explain that Burton, along with multiple East Tampa residents, went to a Tampa City Council meeting to have their voices heard during public comment about the lack of support they’re receiving through the city’s Owner Occupied Rehab (OOR) program, which is supposed to help residents with essential home repairs. East Tampa is historically Black, low-income, and is often underserved by the city and the county. The community is routinely left out of the discussion when it comes to developing and improving Tampa.

“What city council forgets is that there’s actually more to Tampa than just South Tampa,” says Thomas. Thomas and Brown praise organizers like Burton, saying, “We will stan for organizers on the ground anytime they need us.”

Each episode includes a “message from frontline activists” section, where those embedded in the struggle for justice commentate on the subjects brought up by the co-hosts, and do a deep dive into each aspect of the issues facing Tampa.

It’s in this segment that people like ErrDaisha Floyd are able to bring their personal politics, experiences and ideas to the conversation. Floyd, 21, has been active in political organizing for about five years. In her teens, she read the book “The New Jim Crow,” and watched the documentary “13th,” which she says changed her perspective on politics forever. She has four uncles with felonies, so she found herself involved with the effort to restore Florida felon’s voting rights. She also hosts her own YouTube show, called “Dear Diary of a Mad Black Woman” where she discusses her politics from an anti-capitalist, anti-imperialist, abolitionist perspective.

“We have to build our communities to the point that we don’t rely on the police and capitalists, where we keep each other safe and hold each other accountable,” says Floyd.

Angel D’Angelo from the Restorative Justice Coalition helps write the scripts for the show, and also researches and moderates some of the frontline activist segments. Mary Liz from Sustainable Souls of Tampa Bay, K.D. from BCM, Rozell Coffie and Andy Rivera make up some of the regular frontline activist commentators.

PSC and TBAN have met with each city council member before, but say they haven’t seen the officials act on any of their concerns or demands. They have felt wave after wave of frustration with city officials, who rather than hearing community requests to divert police resources to programs like CAHOOTS—a program where social workers respond to people in crisis rather than police—decided to increase the Tampa Police budget by $13 million, the largest increase of any major U.S. city in the country, bringing the proposed budget for TPD to $176 million total.

The activists say that while the city council has met with them and heard their concerns, the council has not acted on or tried to address any of their concerns, and even when they offer potential solutions, they get excuses or are tuned out by council members completely.

City council members Orlando Gudes told Creative Loafing Tampa Bay that his heart is in East Tampa, and that if residents watch recent CRA meetings, they will see that he is doing everything he can to make the community better for the homeowners there. Bill Carlson said he meets with PSC and TBAN members regularly and has heard their concerns.

Beyond their other struggles, the activists now have competition in the arena of local politics. Members of the Facebook group “Community Patriots of Tampa” are encouraging their members to get on local boards to enact their agenda.

PSC and TBAN said they are appalled at the idea of members of the community patriots group joining local committees.

“After all, they loudly support the twice-impeached former president that coordinated an insurrection, they lack diversity, they illegally vandalized our streets with that disgraceful ‘bork the blorp’ mural,” PSC and TBAN wrote in comments to CL. “It is obvious to us that they don’t respect this city or the diverse humans within it.”

PSC and TBAN would like to see young, powerful, honest and authentic people from all backgrounds serve on boards and run for office. They want to see the status quo of local politics challenged, and right now, they’re exploring their options to see who might be a good fit to represent them in the political arena.

They encourage anyone who shares their vision to get involved in PSC and TBAN.

“There’s no experience required,” says Thomas. “Just a commitment to growth and the radical change that we dream of.”