'That’s a conspiracy theory': Florida Gov. DeSantis denies that he had COVID-19

“He went MIA for three weeks of November, claiming that he was working on some statewide plan,” Fried, the only statewide elected Democrat, told Jong-Fast. 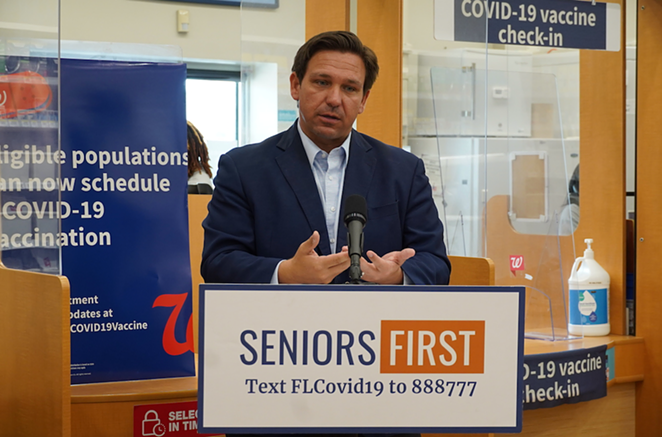 But she spurred speculation this week when she floated the idea that DeSantis was sidelined in the fall by COVID-19 --- a claim his office rejects.

After a Cabinet meeting Tuesday, Fried acknowledged having no proof for her supposition, initially made during a podcast. Her theory links a public absence by DeSantis in November to a time when he was said to be working on a vaccine-distribution plan that Fried says never materialized.

“It's just a personal hunch that ... when somebody goes MIA and claims that it's because they're working on something, and then there's no productivity from that, that was my assumption,” she said.

The governor’s office issued a statement denying that DeSantis had the virus.

“The governor has stated on several occasions that he has never tested positive for COVID-19,” DeSantis spokeswoman Meredith Beatrice said in an email.

Asked Wednesday about the claim while in Sumterville, DeSantis snapped, “That’s false, that’s a conspiracy theory.”

The kerfuffle came after Fried took part in a five-minute interview with Molly Jong-Fast of The Daily Beast’s “The New Abnormal” podcast. In the interview, released early Tuesday, Fried surmised DeSantis came down with the virus in the weeks after the November elections.

“He went MIA for three weeks of November, claiming that he was working on some statewide plan,” Fried, the only statewide elected Democrat, told Jong-Fast. “My take is that he probably had COVID and didn't want to tell people. When the vaccines first came to our state, there was no communication, there was no plan. No one knew where the vaccines were going to land.”

The interview was more wide-ranging, hitting on Florida’s political landscape, vaccination efforts and concerns about the state welcoming spring breakers as new strains of the virus expand. However, the show was promoted as, “Florida’s Top Dem: Ron DeSantis Hid His COVID.”

DeSantis appeared before reporters at the Capitol on Nov. 4 and appeared on conservative cable TV shows in the days after the election, most notably in a Nov. 6 interview with Fox News’ Laura Ingraham in which he suggested the legislatures of Michigan and Pennsylvania should override vote results in selecting presidential electors.

DeSantis’ next public appearance, according to his daily calendar, was Nov. 11, when he gave an interview by remote with the Florida Channel as the state was threatened by Hurricane Eta. He met with members of Visit Florida in Tallahassee on Nov. 13, according to the calendar.

DeSantis’ next time in public was when he appeared Nov. 17 at the organization session of the Legislature.