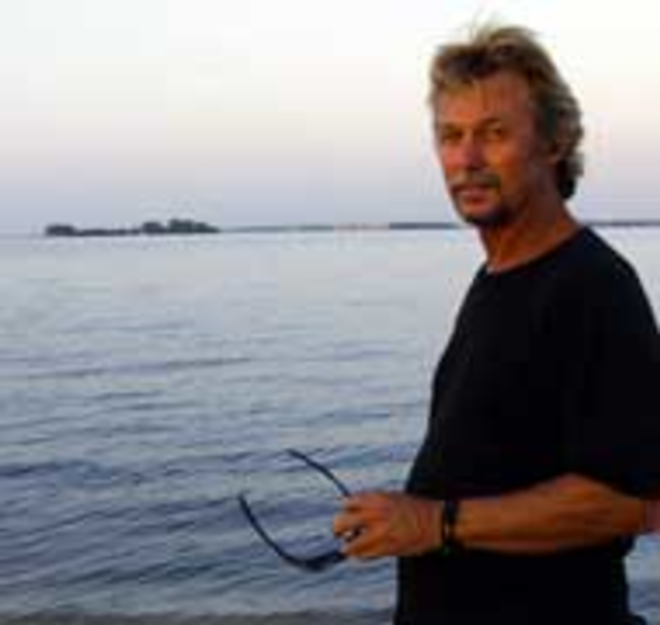 VALERIE MURPHY
Richards, with Weedon Island in the background.

Architect George Richards first envisioned a free-speech tower after the 9/11 attacks, when talk began of a competition to design a memorial on the site of the World Trade Center. Though he didn't end up entering that contest, the idea continued to haunt him as he saw debate stifled and rights eroded in the wake of the disaster. "There was no venue for expressing yourself without being labeled a terrorist," he says. His goal was to design a space that gave everyone equal opportunity to freely disseminate information via broadcast and electronic media.

The site for his project should be an island, he says, perhaps Weedon Island or Honeymoon Island. He likes the idea of a moat protecting the tower from interference. "When the feds come to shut you down, you've got time before they can knock you off the air."

The tower he proposes would be a slender, open-gridwork, 14-story triangular structure topped by a broadcast transmitter. "I'm toying with the idea of a flame or maybe a laser at the top of the transmitter to encompass the idea of the four elements: earth, air, water, fire."

A central core contains glass elevators and columns of cascading water. "As you're going up in the glass elevator, you're seeing water running downward," explains Richards. "It creates a sort of visual dichotomy."

Radio and television broadcast studios and an amphitheater would occupy the base level. "People can sit on the grass and see and hear the messages and see exhibitions, dance, theater and poetry." The next levels would hold server rooms with Internet connections. "There would be no fees, no clubs to join; you take a number and have free access when it's your turn," says Richards. "The best technology is available only to a few people now. This would make it available to everybody."