The Gay Agenda: It's Pride week, so get turnt and fight the power

Not at the same time, though. 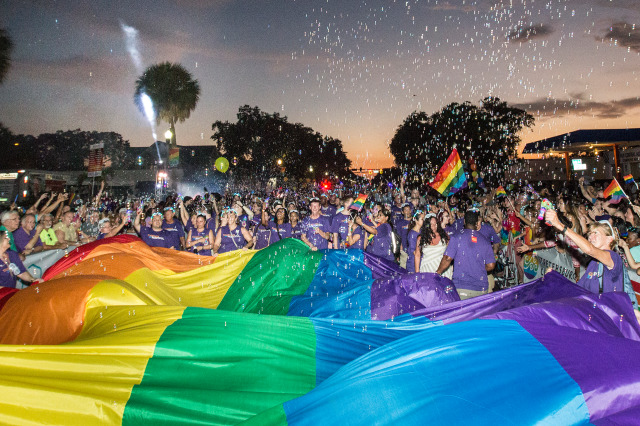 Chip Weiner
The flag and the foam came out in 2016.

That’s why this week, we’re swapping out our usual moniker for this column, “The Liberal Agenda,” for an agenda of a different (but related) hue. The actual quote-unquote Gay Agenda — putting chemicals in the water to turn the frogs gay, inserting a gay-ish character into Beauty and the Beast, ruining straight people’s marriages, etc. — is a fever dream cooked up among the likes of Alex Jones. But this week, the agenda is, un-ironically, Pride all the way.

That means there’s a ton of shit to do to help promote equality — whether you want to don a feather boa or learn about the problems that disproportionately plague the LGBTQ community.

Art Out: LGBTQ Artists in Gulfport. Check out the work of tons of local artists in a multitude of media, from acrylic to photography to ceramics to glass. Ongoing, Mon.-Fri., 10 a.m.-7 p.m. Gulfport Public Library, 5501 28th Ave. S., Gulfport.

Out of the Shadows: Homeless LGBTQ Youth Project. Out of the Shadows, a performance/forum held in March at St. Pete’s Palladium Theater, blended journalism and theater to shed light on the lives of homeless LGBT youth. This week, Gulfport’s public library will premiere a video about the event, which was a collaboration between Your Real Stories, which specializes in dramatizing real people’s life stories, and the LGBT Homeless Youth Project, a program of Family Resources, an agency which specializes in services for runaway and homeless youth. The aim of the Gulfport event is to highlight not just the project, but the need for more resources to allow the nonprofit to change more endangered lives via outreach and, eventually, housing and employment. Thurs., June 22, Noon. Gulfport Library, 5501 28th Ave. S., Gulfport.

Lady Valor: The Kristin Beck Story. After serving 20 years on U.S. Navy SEAL Teams 1 and 6 — racking up 13 combat deployments and 29 medals in doing so — Beck, a trans woman who is now retired, is an artist and a trans rights activist. The documentary Lady Valor: The Kristin Beck Story tells her story. (Some of her work will be on display at the nearby Veterans Art Center of Tampa Bay — see below.) Fri., June 23, 6 p.m. (film at 7). freeFall Theatre, 6099 Central Ave., St. Petersburg, ladyvalor.com.

TransPride March. For the first time in Pride’s history, Equality Florida and the TransSupport Network are launching the parade with a march to show support for transgender and gender-nonconforming individuals (a group that is perennially the target of everything from violence to right-wing political attacks) and their loved ones. Sat., June 24, 6:30 p.m., Albert Whitted Park, 480 Bayshore Dr. SE, St. Petersburg.

Florida Holocaust Museum’s Nazi Persecution of Homosexuals Exhibit Tour. Join Metro Wellness for a tour of this very important exhibit on one of the lesser-talked-about aspects of the Holocaust. If you can’t make it out, no worries. This exhibit was extended due to popular demand and now runs through Aug. 6. Tour is Wed., June 28, 10:30 a.m.—1:30 p.m. Florida Holocaust Museum, 55 5th St. S., St. Petersburg. $5.

Ongoing: Social events, volunteer opportunities and support groups for all segments of the LGBTQ community, from trans youth to gay seniors, take place regularly on both sides of the bay. Check out the websites for Metro Wellness, Project No Labels, Balance Tampa Bay and ProSuzy for calendars and info.