The Orlando Sentinel now has a union

The group now becomes part of the NewsGuild-CWA, the nation's largest union for journalists and news industry employees. 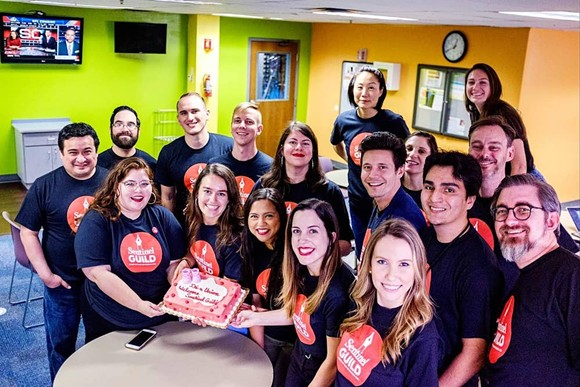 "The journalists in our newsroom have spoken, deciding overwhelmingly that we deserve a seat at the table to bargain with Tribune and protect the future of local journalism," the union announced on Tuesday.

The group now becomes part of the NewsGuild-CWA, the nation's largest union for journalists and news industry employees. Their first action is to keep things the same, for now.

"We're so excited to finally have the union protections we so deserve," the union wrote on Twitter. "At this time, we enter a period called 'status quo' where the company cannot change our working conditions without first bargaining with us."

The union says it will begin the process of bargaining with the Tribune to secure their first contract. They intend to seek protections and benefits, "from a fair pay scale to diversity in hiring decisions."Sentinel journalists first announced their intention to organize back in February, in response to new ownership by "vulture capitalist" firm Alden Global Capital, known in publishing as "the destroyer of newspapers."

Alden disclosed in November that it had become Tribune Publishing's largest shareholder, becoming majority owner of the Sentinel, the Chicago Tribune, the New York Daily News, the Baltimore Sun, the Hartford Courant and the Sun-Sentinel in South Florida."

Like the other Tribune newspaper unions," said the Sentinel Guild's mission statement posted in February, "we are deeply concerned by the potential takeover of hedge fund Alden Global Capital. Alden has been called the 'grim reaper' and 'Darth Vader' of the newspaper industry because it harvests its properties for short-term profit and leaves the carcasses to rot. "Tribune Publishing did its best to hold back the Guild, refusing to recognize the union and forcing an election, which was originally scheduled for March 25."

We have to go to the ballot box to make it clear that's what we're going to do," said Guild representative and Sentinel justice and safety reporter Cristóbal Reyes said in March, in response to the setback. "We knew going in this was probably going to happen. They have a mixed record of recognizing unions."

Reyes received notice from Tribune bosses on April 21 that he was being furloughed."Just a reminder that @tribpub didn’t recognize @OS_Guild, even though it recognized all other unions in the chain, because it wanted it to be easier to pull the crap it pulled this week on its workers," wrote Chicago Tribune audience editor and Guild steward Jeff Cercone in response.

"While @orlandosentinel journalists are working tirelessly to cover COVID-19, we’ve endured guild election delays, then pay cuts and furloughs — at a time when our community depends on us most. Next time Tribune can't blindside us. They’ll have to bargain first," wrote the Guild on Tuesday, in the thread posting the outcome on Twitter:

WE WON!! 🎉🎉🎉 The journalists in our newsroom have spoken, deciding overwhelmingly that we deserve a seat at the table to bargain with Tribune and protect the future of local journalism. Sentinel Guild is no longer a dream but a reality. 81% of ballots counted were marked YES.


"Thanks to everyone who supported us along the path to this victory. The world is realizing we need quality journalism more than ever before, and we hope to be here for many years to come so we can provide just that."