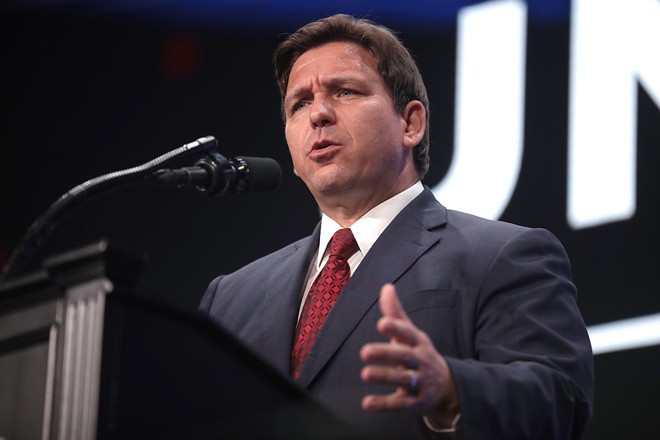 Gage Skidmore from Surprise, AZ, United States of America, CC BY-SA 2.0 , via Wikimedia Commons
Governor Ron DeSantis speaking with attendees at a "Unite & Win Rally" at Arizona Financial Theatre in Phoenix, Arizona.
I thought by now I’d lost my ability to be shocked by the latest political outrage.

Not just surprised, but genuinely aghast and shaken to my core, like I was when George W. Bush’s team lied the country into war, or when the Trump administration threw kids into cages, or when Donald Trump incited a mob to storm the Capitol—or like I still am that no senior official went to prison for any of those events.

Leave it to Ron DeSantis to prove me wrong.

Don’t get me wrong. I know that flying Venezuelan asylum-seekers to Martha’s Vineyard was designed to piss me off. DeSantis’ entire political brand is built on owning the libs.

We—the media, the elite, the non-MAGAs—are supposed to huff about the inhumanity and the laws he might have broken and how this recalls the Reverse Freedom Rides. We’re supposed to point out that they’re not illegal immigrants, that seeking asylum is not illegal, that the migrants can legally remain in the country at least until their asylum hearing, and that they escaped a socialist South American country DeSantis claims to despise.

We’re supposed to demand an explanation for why DeSantis chartered planes to ship migrants who’d never stepped foot in Florida from Texas to Massachusetts. (“Most of them are intending to come to Florida,” DeSantis said Friday, with no evidence that’s true.) We’re supposed to wonder why DeSantis paid $615,000 to a charter plane company that happens to be a big GOP donor.

We’re supposed to get hung up on the details, which to DeSantis are beside the point.

We’re supposed to insist on a federal investigation into why Florida’s agents in Texas lured the migrants onto the planes with promises of housing and jobs (they aren’t legally allowed to work); why they instructed them to register their change of address with the wrong government agency, which would ensure that they’d be slated for deportation; and especially why Department of Homeland Security agents listed the migrants’ mailing addresses as random homeless shelters all over the country, knowing the migrants would have to check in with the ICE office nearest whatever address the DHS agents put down, even if it was thousands of miles away, or face permanent removal.

We’re supposed to make DeSantis a martyr of the liberal machine. (An FBI search warrant would do him better than a truckload of Viagra.)

If this advances DeSantis’ career, try to imagine what’s next.

I know that this wasn’t just a political stunt. It was also a trap. DeSantis knew when he sent the migrants to Martha’s Vineyard—not Boston, like his goon in Texas reportedly promised—with a few personal effects, the small island of 20,000 people, accessible only by plane or boat, wouldn’t be able to accommodate them.

So after Martha’s Vineyard residents cared for them for two nights—volunteers gave them new cellphones—the state offered them the choice to move to Joint Base Cape Cod, where they’d be provided shelter and humanitarian aid. They took it.

And The New York Post was Johnny-on-the-spot with the headline DeSantis craved: “Liberals Deport Migrants.” (Details never were the Post’s thing, either.)

I also know that the ostensible point of this affair isn’t the actual point. It’s not about transferring the burden migrants impose on border states—or even Florida, where the migrants are still free to go if they choose, and those whose families live there likely will. It’s not about forcing the Biden administration to get “tougher” on border-crossers; border agents are already making nearly 2 million apprehensions a year.

It’s certainly not about finding a solution to the country’s decades-old immigration problems, because lord knows DeSantis hasn’t offered any (or at least anything worth discussing).

It’s about DeSantis preening for the conservative media.

Other far-right governors are doing the same trick. Gov. Greg Abbott of Texas bussed migrants to the Naval Observatory in Washington, D.C., where Vice President Kamala Harris lives, as if the Secret Service is going to let them in. Both he and DeSantis say they’re going to keep shipping migrants to liberal cities, because human beings escaping economic squalor and political turmoil are nothing but pawns in service of their ambition.

Not coincidentally, both are likely entrants in the 2024 Republican presidential primary, which is shaping up to be the Dickhead Olympics, a battle royale of bullying and assholery, a race to the bottom to win over Trump’s fanbase.

I know all of that. And I should know better.

But I’m still shocked that overt racism and abject dehumanization is a viable national political strategy, that the media is treating it like a legitimate policy dispute instead of minor-league fascism.

Mostly, though, I’m shocked at the realization of how much more there is to come—of all of the new layers of depravity we’ve yet to mine.

If this advances DeSantis’ career, try to imagine what’s next. I can’t—and that terrifies me.