His latest announcement comes amid actual teacher and nurse shortages. 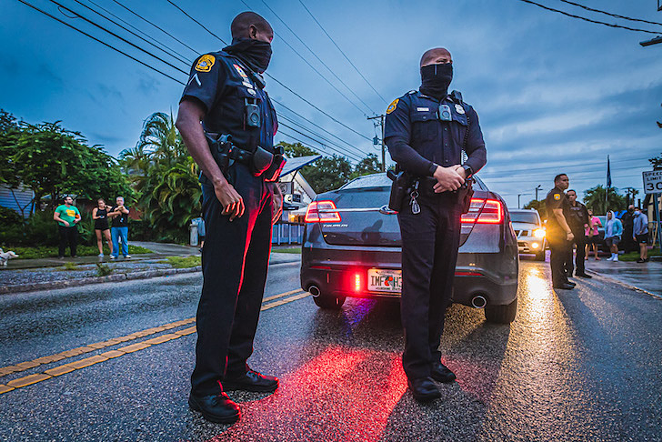 At a press conference in Lakeland this morning, Gov. Ron DeSantis used a classic right-wing fear tactic to justify a $5,000 sign-on bonus for Florida police officers, among other proposed new benefits.

“All the things that we care about, fighting theft, our economy, education, all these things that are so important,” DeSantis, whose approval rating has fallen 14 points since July, said at the conference. “If you don’t have safe communities, if you don’t have rule of law, law and order, a lot of that stuff isn’t gonna matter.”

He went on to defend his proposed legislation, which would include the sign-on bonus, covering the cost of state certification or training programs of up to $1,000 per officer, and creating a law enforcement academy scholarship to cover the cost of enrollment.

This is part of an ongoing effort by DeSantis to recruit new police officers, especially those from out of state. He announced the proposal with the support of House budget chief, Republican Sen. Kelli Stargel, and Attorney General Ashley Moody.

But in Florida, there is little to no evidence that we actually need more cops.

In Tampa Bay last year, WTSP reported that there doesn’t appear to be an issue filling job openings and that, “the number of openings hasn’t changed much in recent years.” A report from Orlando says that police “staff levels are steady” and Jacksonville also reported that police numbers were at normal levels.

Miami police, however, claim there is an impending shortage.

Law enforcement officials have long tried to claim that police officers are quitting in droves across the country, a move to encourage more benefits for police officers.

But an analysis by the Marshall Project, a nonpartisan, nonprofit news organization that reports on the U.S. criminal justice system, proved these claims wrong. According to their analysis, local police departments lost just under 1% of employees after a decade of steady expansion.

“You don’t have safe communities if you don’t support the folks who wear the uniform,” DeSantis said during the press conference.

“More spending in a year hasn’t significantly correlated to less crime or to more crime,” says the Post. “For violent crime, in fact, the correlation between changes in crime rates and spending per person in 2018 dollars is almost zero.”

The irony is that DeSantis’ proposal comes at a time when experts say there is a “critical shortage” of another kind of first responder–nurses.

Nurses leave the job for many different reasons, but many become overwhelmed by the career and switch paths. In July, WFTS Tampa Bay reported that by 2022, it is predicted that the US will need another 1.1 million nurses, and that in Florida the shortage is escalating. Estimates show by 2025, the state is predicted to be in “great trouble” according to an expert who spoke with the TV station.

Florida is also experiencing a teacher shortage, and it is predicted that Florida’s teaching vacancies could grow to 10,000 this year.

In both of these fields, many people have complained about the low-pay and high risk of the professions. Florida ranks 49th in the nation in teacher salaries.

The average salary for a teacher in Florida in 2021 is $51,166.57 per year after a much needed increase was signed into law by DeSantis last year. While the salary for police officers in Florida this year is not clear, in 2019 Florida ranked 22nd in the country, paying officers an average salary of $60,720 according to Forbes.

In order to address the teacher vacancy, DeSantis passed legislation to give public school teachers and principals $1,000 checks, along with checks of the same amount for first responders like cops and EMTs. Some teachers spoke up and said that amount of money was not enough for the job they are doing during the pandemic, and said they wished there could be a larger and more reliable increase to their pay.

The Marshall Project also examined the origins of the use of “Law and Order” terminology that DeSantis used on Thursday to justify the legislation.

The Marshall Project explains that at the apex of the civil rights movement, five-term Senator and former GOP nominee for president Barry Goldwater and other conservative politicians needed a way to tap into white voters’ fears without appearing to talk about race, according to political scientists and historians.

Law and order was “a strategy for reaching suburban voters without having to say the ugly part out loud,” Leah Wright-Rigueur, a political historian and public policy professor at Harvard University, told the Marshall Project.

As DeSantis pushes this legislation, nurses continue to suffer from exhaustion due to Florida’s record-breaking COVID-19 numbers, and school districts are in open revolt against his anti-mask, or “pro-choice” mask policies.