I, for one, welcome our giant toad overlords. 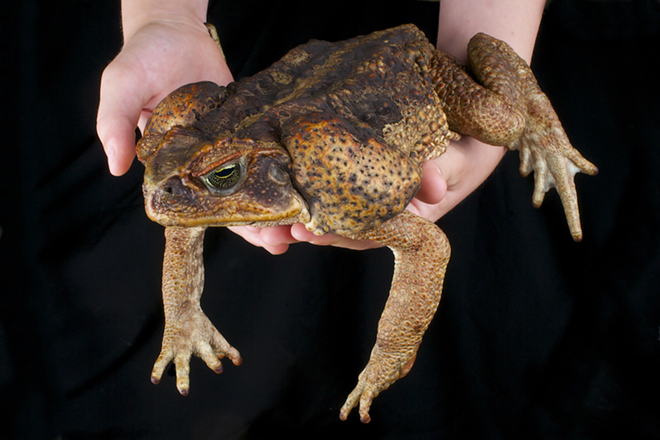 Sightings of the toads are statewide and have occurred in Tampa, Orlando and even as far as the Panhandle, but right now South Florida is straight-up plagued. The Palm Beach Gardens community is currently dealing with thousands of cane toads “clogging people's pools, patios, and even spread out all over the street,” says WPTV.

"I just see a massive amount of toads or frogs everywhere, covering every square inch," said resident Jennie Quasha to the station. "You can't even walk through the grass without stepping on one."

Our war with these big-ass toads is nothing new. For decades, the cane toads have been a major issue for residents of Florida, mostly because they secrete a poisonous, milky ooze that is toxic to humans and pets. These large sacks of slime are actually one the largest toad species in the world, and can grow from 10 inches in length.

According to the Florida Fish and Wildlife Conservation Commission, the toads are native to the Amazon basin and were first introduced sometime in the 30s or 40s, likely as pets that either escaped or were released into the wild. But since then, things have gotten much worse, and recent heavy rains have only exasperated the problem. "With the warmer winter and then we had a rain two to three weeks ago, a torrential rain, that caused them to go into a breeding cycle," said Mark Holladay, a lead technician with Toad Busters to WPTV. "There will be another influx like this in 22 days when the next batch hatches out, and this is in every community in Florida."

Now, don’t get these confused with the native southern toad. Those are the good toads. The differences can be slight, but unlike our buddies, cane toads feature large glands behind their eyes and lack a crest between their eyes. 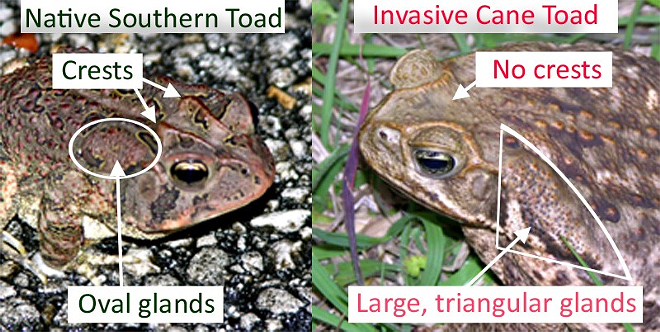 If you see a cane toad, you’re most definitely encouraged to destroy it. According to the University of Florida, the most humane way to euthanize a cane toad is to “rub or spray 20 percent benzocaine toothache gel or sunburn spray (not 5 percent lidocaine) on the toad's lower belly.” This will apparently make it become unconscious, which at that point UF says to put it in a plastic bag and place it in the freezer for 24-48 hours. A cold peaceful death. Just be sure to wear gloves.

But if placing a massive poisonous toad next to your Hot Pockets for a two day "Shining" treatment is not your thing, you can also just call a local trapper.

Either way, spare no invasive toad.

Stay up to date with Tampa Bay news by subscribing to our newsletters.