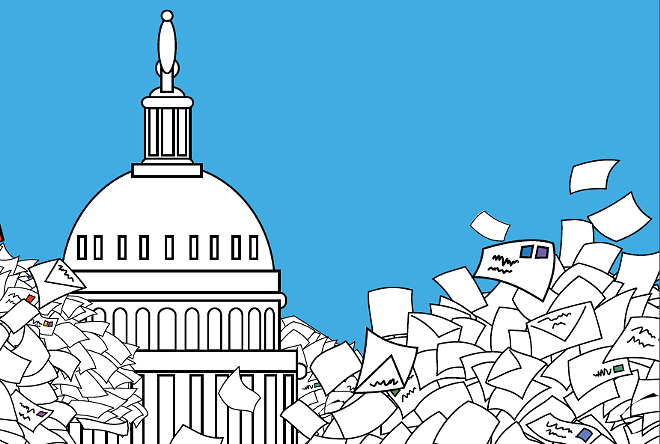 Julio Ramos
As controversy swirls almost daily in Washington D.C., lawmakers are getting what some are calling record volumes of correspondence from constituents. When votes loom on everything from President Trump’s Cabinet nominees to the Affordable Care Act loom, they hear about it more than ever. When Betsy DeVos, Trump’s highly controversial pick for secretary of education, was still up for confirmation — before she was confirmed courtesy of Vice President Mike Pence’s historic tie-breaking vote in her favor — a staffer for Democratic Pennsylvania Congressman Bob Casey told reporters his office received some 80,000 letters on DeVos alone.

Critics of DeVos, citing her lack of relevant experience, her support of privatizing education and fears that she’d push for religious indoctrination in schools, even got through to a couple of Republicans. Senators Lisa Murkowski (R-Alaska) and Susan Collins (R-Maine) said they voted the way they did — against DeVos’s confirmation — in large part due to the flood of letters and phone calls.

Yet those two were, of course, a tiny GOP minority. Senators like Florida’s Marco Rubio, who benefited from DeVos family money and support as recently as last year, ignored the pleas of constituents, some of whom practically camped outside his district office in Tampa despite the threat of arrest to get their message across.

Protesters came to his office because their emails bounced back and his voicemail box was full. When asked via email about the volume of letters and emails, a spokesman for Rubio directed CL to an Orlando Sentinel story in which he told a reporter there is “a longstanding policy of not publicizing” correspondence tallies. After months of trying to get Rubio’s attention, activists have to know they probably won’t change his mind. But they do know that drawing attention — especially media attention — to their pleas and to how he votes will help create fodder that could put him on the defensive when he runs again, be it for reelection or, once again, for president.

In any case, there are many ways to get one’s message across to an elected official, from city council members to the Senate — whether they listen or not.

Here are the best ways.

Get a handle and tag ’em. Social media: It’s not just for arguing about politics. Sure, writing about a bad bill on Facebook and tagging your congressman doesn’t involve getting off the couch, but it can help draw your friends’ and acquaintances’ attention to an issue.

Call ’em up. Spoiler: There is roughly a 0.0 percent chance that your member of Congress will be willing to chat with you on the phone about Trump’s border wall; he or she likely won’t even be in the office when you call. So leave a message with the staffer who answers the phone. If a senator’s staff is dealing with a deluge of phone calls on the same issue, a former congressional staffer told the New York Times’s Daniel Victor, it could help shift his or her focus — provided said senator is even listening.

Pay ’em a visit at the office. Lately, activist groups have been helping get the word out about protests, many of which are taking place outside local satellite offices of members of Congress, and often they’ll drop petitions off there. But you can also go on your own to voice your thoughts. A word of warning: Although taxpayers pay the rent on these offices, some officials’ offices are in private buildings, and constituents can be cited for trespassing if the building owner does not want them there. (This happened earlier this month when two protesters did not obey orders to leave the building that houses Rubio’s Tampa office.)

Check their schedule. By the time Saturday morning came around, Congressman Gus Bilirakis probably knew what he was in for; surely he’d seen his colleague, Utah Rep. Jason Chaffetz, get heckled during his town hall on the Affordable Care Act. And sure enough, progressives packed his Pasco County event in order to urge him not to vote in favor of the act’s seemingly imminent repeal. And because a local GOP official tried to silence critics by bringing up nonexistent “death panels” Republicans cited as a way to siphon support from the measure, Bilirakis’s town hall went viral. Groups like grassroots advocacy network Indivisible recommend finding out where your member of Congress will be and confronting him or her there — especially if there are news cameras around.

Email away. While plenty of people say emailing your senator or congressman is ineffective, it varies by officeholder. It is of course hard to know if a member of Congress has even read an email without a personalized response. But for those who aren’t comfortable on the phone or have scheduling conflicts or mobility issues keeping them from attending events, this is probably better than nothing.

...Pizza? At least one clever activist got the idea to order their elected official a pizza, and had the restaurant place his message in the “special instructions” part of the order. While that could get pricey, at least you know it’ll get delivered.

Here’s how to get in touch with Tampa Bay's Congressional leaders in Washington: