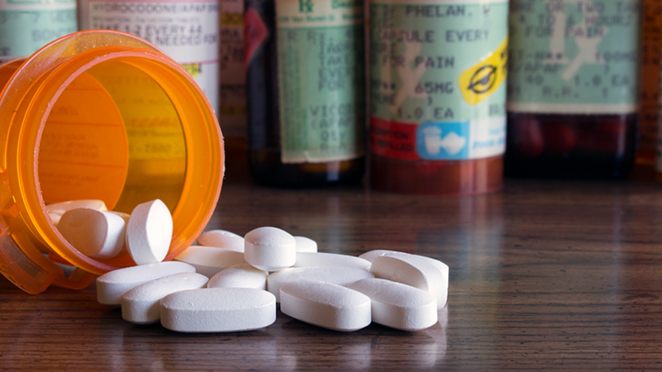 By now, the toll of the U.S. opioid epidemic is clear — encouraged by Big Pharma, doctors overprescribed pain pills, leading to widespread misuse, addiction, and an estimated 453,000 overdose deaths between 1999 and 2016.

The 2019 National Survey on Drug Use and Health found that a majority of misused prescription drugs were obtained from family and friends, often leftovers from their home medicine cabinets. In recent years, the Drug Enforcement Administration has encouraged people to turn in their unused prescription pills as part of the twice-a-year National Prescription Drug Take Back Day.

The next one is between 10 a.m. to 2 p.m. on Saturday, April 24. People can find a local drop-off point at takebackday.dea.gov to dispose of any unused medications — anonymously, no questions asked. A search of locations within 50 miles of Creative Loafing Tampa Bay found that local law enforcement agencies have teamed up with pharmacies like Walgreens and CVS to collect your shit.

The program also takes back old vape cartridges. In 2019, a deadly respiratory illness was linked to cannabis cartridges that contained a substance called vitamin E acetate. The substance was banned in Michigan in 2019, and while it has largely been linked with the black market, vape cartridges containing it were still showing up at some dispensaries as recently as 2020.

According to the DEA, the last National Prescription Drug Take Back Day in October collected 985,392 lbs. of medications, or 492.7 tons.

Some of the most misused opioids include codeine, fentanyl, Vicodin, and OxyContin. The latter is the subject of Empire of Pain: The Secret History of the Sackler Dynasty, a new book by writer Patrick Radden Keefe that expands on his 2017 coverage on the topic for The New Yorker. The Sacklers are a wealthy family who made a fortune pushing pain pills — the book puts that figure between $4 billion and $13 billion from OxyContin alone. But according to Keefe, the DEA was complicit in a tragedy that has claimed more Americans "than had died in all of the wars the country had fought since World War II.

"Historically, the DEA had regulated the quantity of these drugs that could legally be brought into the United States," Keefe writes. "But the burgeoning opioid industry pushed to raise these limits, lobbying doggedly, and over time the DEA accommodated. The opioid crisis is, among other things, a parable about the awesome capability of private industry to subvert public institutions."