The victim was treated on site, and transported to St. Joseph's Hospital in Tampa. Eric Seidel, of Hillsborough County Fire Rescue, told Creative Loafing Bay that the incident occurred at around 8:30 a.m. at the property located at 12802 Easy St.

In a lengthy Facebook post this morning, Big Cat Rescue CEO Carole Baskin said the victim was Candy Couser, who has volunteered there for nearly five years. The tiger, named Kimba, reportedly grabbed Couser's arm and nearly tore it off at the shoulder while she was feeding it.

"She saw that he was locked in a section that was away from where he was usually fed and radiod the coordinator to find out why," wrote Baskin. "Kimba had been locked away from that section for several days as cameras were being installed there. She opened a guillotine tunnel door at one end of the tunnel, and when she went to raise the second door she saw it was clipped shut. This is our universal signal NOT to open a gate without the coordinator coming to assist, but Candy said she just wasn't thinking when she reached in to un clip it. It is against our protocols for anyone to stick any part of their body into a cage with a cat in it. Kimba grabbed her arm and nearly tore it off at the shoulder."

Staff members then rushed to her side, pulled her arm out and applied a tourniquet to stop the bleeding. They then placed "her arm in ice packs to try and save it." When authorities arrived 15-20 minutes later,  Couser was treated and then transported to St. Joseph's Hospital in Tampa.

Baskin says Kimba is being kept in quarantine over the next 30 days as a precaution.

According to Big Cat Rescue's website, Kimba is a male tiger from Guatemala, born sometime in 2017. The cat, along with two other tigers, arrived at Big Cat Rescue in 2019, after  Guatemala passed a law banning circuses. Big Cat Rescue found out about the tigers after a 2018 Daily Mail story highlighted starving tigers at the  Hermanos  Ponce Circus in Guatemala that reportedly ripped both arms off a 55-year-old man and ate the limbs.

RELATED: The tiger that nearly ripped off the arm of a Big Cat Rescue volunteer was among a group of tigers that ate a guy’s arms 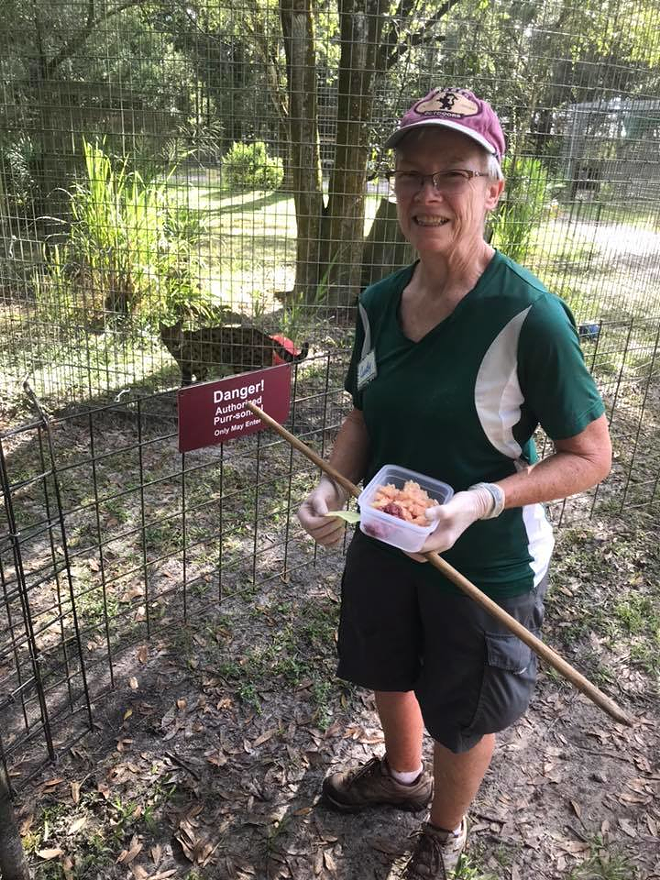 Big Cat Rescue was featured in last summer’s Netflix hit documentary “Tiger King: Murder, Mayhem and Madness,” starring the animal sanctuary’s CEO Carole Baskin and her nemesis Oklahoma zookeeper Joseph Maldonado-Passage, aka Joe Exotic. In the documentary, one of Exotic's staff members, Kelci Saffery, had his arm ripped off by a tiger, which prompted the infamous line, "I'm never going to financially recover from this."

Maldonado-Passage was sentenced to 22 years in prison, after being found guilty of a murder for hire plot against Baskin, as well as killing five tigers and numerous other animal abuse violations.

Baskin has also been at the center of the disappearance of her late husband Jack Donald "Don" Lewis, which is still an active cold case in Hillsborough County. Last March, Hillsborough Sheriff Chad Chronister said his department was getting “six tips a day,” regarding the 23-year-old case, though most were not credible.

The animal sanctuary has been closed to the public since the beginning of the pandemic, and has been losing $160,000 a month, according to a post on its website.

UPDATED: 12/04/20 11:51 a.m. This story has been updated with comment from Big Cat Rescue and background on Kimba the tiger's last home, and to correctly identify Kelci Saffery.