TPUSA was surprised its Tampa summit attracted neo-Nazis. It shouldn’t have been

There was plenty of fascist rhetoric at the Turning Point gathering. 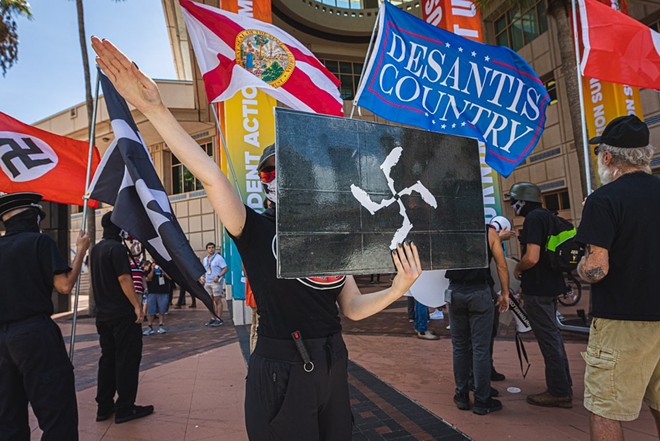 When neo-Nazis arrived holding DeSantis flags outside Turning Point USA’s Student Action Summit in Tampa, organizers of the event said they couldn’t understand why the annual gathering of conservative youths would draw such extremism.

Some attendees did mental gymnastics and claimed that the groups were “feds” or “antifa” dressed up as neo-Nazis to make them look bad.

But the people waving swastikas and SS symbols flags were from confirmed fascist groups in Florida, including the Goyim Defense League and the National Socialist Movement (NSM).

The U.S.’ leading nonpartisan antisemitism group even identified a member of NSM among those outside the Tampa Convention Center.

“We have no idea who they are or why they’re here,” a spokesperson for TPUSA told Creative Loafing Tampa Bay.

Maybe they should’ve listened to their own speeches a little closer.

Given the fascist rhetoric spewed by right wingers at the summit, how could representatives of TPUSA somehow not realize that the neo-Nazi groups—who repeatedly said the N-word to a Black man outside—were attracted to the content at their event?

On the first night of the conference, Charlie Kirk, Turning Point’s co-founder went so far as to say that the group’s followers need to “out breed” the “invading forces” threatening the country.

In order to create fascism, a group with fascist ideals will often, “use national glory and the fear of outside threats to build a new society based on the ‘common will’ of the people,” writes the Constitutional Rights Foundation. “Fascists believe in action, and looking at national myths for guidance rather than relying on the ‘barren intellectualism’ of science and reason.”

Kirk and other Turning Point USA speakers used this method all weekend long.

According to Kirk and other speakers, the enemies of America include: scientists, intellectuals, Democrats, those who believe in the climate crisis, the media, Socialists, trans and queer people and others that might invoke fear of the “outside threat” which fascism relies upon.

Kirk’s references to outbreeding the enemy fall in line with the “Great Replacement Theory” a white supremacist view popularized by Adolf Hitler and subscribed to by this year’s racist Buffalo grocery store shooter, the El Paso Walmart shooter and the Christchurch shooter in New Zealand.

Across the country, this idea is taking hold with Republicans and other right wingers who believe Democrats want more immigrants to replace white voters. Some argue that the fall of Roe V. Wade is tied to the idea of the great replacement theory.

The same night as Kirk’s comments, Governor Ron DeSantis once again called on the “invading forces” narrative, talking at length about the threat of illegal immigrants, adding that “China is laughing” at the U.S.

He also said that the left has contempt for “rule of law in this country.”

Yale Professor Jason Stanley and author of “How Fascism Works” has pointed out that, “the appeal to ‘law and order,’ to police state levels of control, only applies to certain threatening classes who need to be put back in their place or eliminated.” 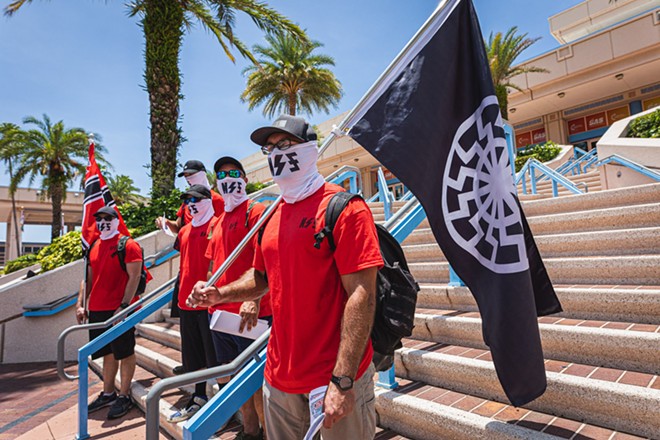 DeSantis has been adept at doing just this. Last year, in the aftermath of the George Floyd uprising, he signed HB1 one into law, which essentially criminalizes many forms of protesting.

DeSantis said Dr. Anthony Fauci “would have won” if he had not stood up to him and pushed back against vaccines and COVID safety measures.

In Florida alone, over 77,000 people have died of COVID. Over one million have died in the U.S. Historically, fascists have been callous toward mass death of people they consider weak, and have gone so far as to kill off people with disabilities.

“I'm saying this was all garbage and everyone knew it was garbage from the outset!” Senator Ted Cruz said about anecdotal COVID restriction experiences that he fed to a cheering TPUSA audience.

Throughout last weekend, themes of COVID conspiracies, taking action against the invaders, coupled with a firm belief in God and “his America” dominated the speakers’ talking points.

The conference was overrun with the MAGA faithful, many of whom still believe Donald Trump is the rightful president. Children wandered around wearing “Trump Won” hats, there was a “MAGA Mall'' full of Trump merchandise, and several booths peddling far right ideas. The Heritage Foundation, a right wing think tank pushing for many “anti-woke” policies, was also set up at the conference.

Outside, people held “Free the J6 political prisoners” signs on the day that Trump took the stage.

“We created the best, safest and most secure border in U.S. history,” Trump said, pulling on fascist rhetoric. “We built hundreds of miles of border wall. In fact, we completely finished our original wall plan, despite two-and-a-half years of Democrat inspired lawsuits.”

That was a lie, but still got cheers from the crowd, who had been pumped up with the fear of immigrants all weekend.

No one mentioned that one of the greatest domestic terrorist threats are armed white men who commit mass shootings, nor did Trump outright condemn the Nazis who had shown up hours before he spoke. And neither did DeSantis.

The City of Tampa also failed to condemn the neo-Nazis with vigor, instead suggesting that the media should ignore them.

"The First Amendment applies to everyone. It's a sad time for our country when people from the darkest fringes of society feel comfortable openly expressing their vile hate, but it's understandable why many media outlets refuse to do their bidding by publicizing this garbage,” Adam Smith told CL.

Historically, ignoring Nazis does not make them go away. And confronting and exposing them is anything but doing their bidding. Their extremist beliefs may have once been on the fringe, but they’re now embraced by the GOP.

Some called the city’s response “cowardly” and “embarrassing.”

To top off the city’s uninspired response to neo-Nazis in its downtown, the Tampa police were involved in a performative motorcycle send off to Trump as he left the city.

Keep in mind that the hearings for the Jan. 6, 2021 insurrection are currently ongoing, and there’s evidence that Trump helped inspire the violent mob to invade America’s capital, which left a Capital police officer and a J6 protester dead. Four police officers committed suicide in the months following the insurrection.

TPD and Smith were asked questions about the motorcycle send off, but have not yet given a response, which is not out of the norm for the city.

Fascism is unfortunately alive and well in Tampa and the rest of America.

The kind of rhetoric that breeds fascism was prevalent inside the TPUSA summit, and it attracted Nazis to downtown Tampa. Ignoring it doesn’t do anyone any favors, as the City of Tampa apparently believes.

Kirk stood up for his nationalist beliefs last weekend.

“This is why they're afraid of us,” he added. “The moment that we stop being passive, and we start being active, they get terrified.”

At the end of the day, maybe terror is just what the leaders of TPUSA want.