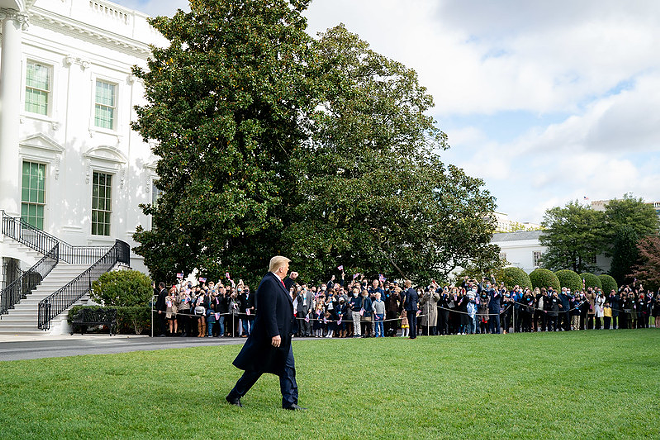 Official White House Photo by Tia Dufour
President Donald J. Trump gives a fist bump to supporters Friday, Oct. 30, 2020, prior to boarding Marine One en route to Joint Base Andrews, Md. to begin his trip to Michigan, Wisconsin and Minnesota.

“How American conservatism dies is the most important story, by far, of this moment,” Matthew Sheffield, a co-founder of the right-wing media-criticism site NewsBusters, wrote in a mea culpa Twitter thread on Friday night. “Conventional media will never tell this story because their business is built on the lie that [Donald] Trump is an aberration rather than apotheosis.”

Sheffield’s thread bemoaned the right’s susceptibility to bullshit—specifically, Trump’s lies about voter fraud—following decades of conservative propaganda. But here he touched on two ideas central to understanding modern American politics that warrant further exploration: 1) Conservatism is dead. 2) Trump is a symptom of conservatism’s collapse, not its cause. Trumpism lives on.

By rights, Joe Biden won a decisive victory. Historically, defeating an incumbent first-term president is hard. It’s only happened three times in a century. Defeating right-wing populism is also hard. Biden won more than 300 electoral votes. When all is said and done, he’ll receive the support of the largest share of the voting-age population since Richard Nixon in 1972. Democrats kept the House, and, in January’s runoff elections in Georgia, they’ll have a chance to retake the Senate.

Yet Tuesday night felt like a disappointment. In part, it was the order in which votes were counted and the uncertainty it produced. In part, it owed to polls foretelling a blue wave that never materialized. But mostly, it was because the goal wasn’t just to defeat Trump. It was to repudiate him and the spineless quislings who spent the last four years goose-stepping to his every utterance.

It didn’t happen. Instead, Democrats lost seats in Congress and state legislatures. And had the vote swung just a point in the other direction, the GOP would likely have had a governing trifecta in Washington.

Such a close shave with illiberalism should prompt introspection. Dems juiced urban turnout, but Trump matched it in the exurbs and rural towns. He even made gains among Hispanics and African Americans. In some cases, there’s a ready explanation: In South Florida, the Trump campaign fear-mongered relentlessly—and effectively—about socialism on Spanish-language media. In other cases, Democrats simply got out hustled.

To be sure, Biden overwhelmingly won BIPOC votes. He also offset Trump’s gains by winning white suburbs. But the returns made clear that Democrats have a messaging problem with some working-class voters—mostly lower-education whites, yes, but also some people of color who bought Trump’s promises of economic prosperity.

Arguments about the soul of the nation and the dangers of authoritarianism resonated among college-educated Americans. Among everyone else, not so much.

Within 48 hours of the election, introspection morphed into full recrimination. Moderates blamed progressives for Democrats’ lackluster showing, claiming that words like “socialism” and “defund” cost them seats. Progressives countered that Black voters had secured Biden’s wins in Michigan, Pennsylvania, Georgia, and Arizona; forsaking their needs to chase white suburbanites is counterproductive.

In a way, this exemplifies Democrats’ dilemma. They comprise a coalition party, drawing from disparate factions with little resemblance to each other. Only in the U.S. would Alexandria Ocasio-Cortez and Joe Manchin call the same party home.

Republicans, meanwhile, are ideologically sorted and much more orthodox. They don’t need coalitions, and they have little use for those outside of their base. In 2016, when Trump careened into office despite earning 2.9 million fewer votes than Hillary Clinton, Republicans governed not as a minority that drew its power from constitutional anachronisms but as if they had a mandate from God to put partisan hacks on the federal bench and cut taxes for the rich.

Implicitly, Trump’s votes were more legitimate than Clinton’s—more reflective of the “Real America”—an idea buttressed by countless New York Times features on MAGA types in Midwestern diners. This year, the implicit became explicit: Biden’s (ahem, urban) votes must be fraudulent, even if they can’t prove it. (As one Pennsylvania state representative tweeted, “It remains to be proven but it appears Dems in Philly did not let a good crisis in COVID go to waste and ruined the integrity of our election process.”) The party’s radicalization is both a product and cause of its epistemic closure: Facts that deviate from its worldview must be discarded.

But there are real-life consequences. The thin-gruel legal challenges will fail, but Trump is nonetheless refusing to turn over the keys to the Biden transition team, hampering an incoming administration that will inherit myriad crises. Trump, meanwhile, wants to host a series of MAGA rallies to complain that the election was fraudulent and Biden’s presidency is illegitimate—actions that could have dangerous consequences. Few prominent Republicans will get in his way; their devolution into mush-brained quislings who quake at the thought of a Trump tweet is complete.

Trump’s shadow will linger for years, maybe decades after he’s gone. For the immediate future, he’ll be a kingmaker. It’s possible he’ll run again in 2024, or that Ivanka or Don Jr. will. It would be foolish to count them out. Consider this: More than 70 million people, after witnessing four years of The Trump Show, wanted to do it again. Whoever the next GOP nominee is, they’ll sing from Trump’s hymnal.

Conservatism is dead. Trumpism remains. We’ll get a reprieve, a chance to inhale—and if Democrats prevail in the Senate runoffs in Georgia in January, an opportunity to inch forward on climate change and health care policy. But our long national nightmare isn’t over yet.

Get Informed Dissent delivered to your inbox. Support local journalism in these crazy days. Our small but mighty team is working tirelessly to bring you up to the minute news on how Coronavirus is affecting Tampa and surrounding areas. Please consider making a one time or monthly donation to help support our staff. Every little bit helps.