'Try to get charges on somebody if you can': Video shows Tampa police targeting BLM protesters

“They deliberately escalated the situation and started the fight with the protesters.” As protesters face an upcoming trial from arrests during a Black Lives Matter march last Fourth of July, video obtained by Creative Loafing Tampa Bay shows that a Tampa police officer encouraged fellow cops to “try to get charges” on protesters during the protest.

Seven people were arrested that day, and the new footage calls into question arresting officers' motives behind their interaction with protesters.

Audio accompanying aerial footage from a Tampa Police Department (TPD) helicopter reveals that the officer encouraged fellow cops to “try to get charges on somebody" toward the beginning of TPD bicycle cops' interaction with protesters.

The video shows that TPD officers pedaled down W Palmetto Street (48:20) and directly into a crowd of Black Lives Matter protesters on the 4th of July 2020. Just seconds later, the cops begin going after protesters and the crowd scatters. The crowd then gets closer as police hold someone on the ground.

At this point, an officer says into the radio, “Get our guys up there, they’re attacking the officers.” (48:45)

The crowd of protesters then moves back from the police, and moments after that (49:25) an officer can be heard saying, “Try to get charges on somebody if you can.”

A protester with a bullhorn and orange shirt is identified as an “agitator” by an officer. Then, an officer says “I would take him down right now,” (54:55) before police rush to arrest him. Bodycam footage previously obtained by Creative Loafing Tampa Bay shows that the protester with the bullhorn was simply yelling, “Why are we being arrested?!” into the bullhorn before an officer rushed forward and body-slammed the protester.

CL reached out to TPD for comment about the footage and audio, in particular, the “Try to get charges on somebody if you can” statement. Our questions were then directed to TPD’s legal team.

“The publication's decision to focus on part of the audio and not its entirety, is misleading and not a true depiction of everything that was said altogether. We will not further comment as there is a pending criminal trial of the defendants who were lawfully arrested in this matter,” Jamel Lanee, TPD’s public safety information officer, sent in an email.

CL sent follow-up questions, asking what audio was missed that would result in a more accurate depiction of the event. TPD did not send a response. The question of which officer said “try to get charges on somebody,” also went unanswered.

A review of the 64-minute long video shows that most of the audio occurs after bicycle police engage with the protesters. Audio surrounding this time frame doesn’t seem to clarify what TPD means by CL’s questions being “misleading.” We’ll update this story if there’s a response to clarify the department’s statement.

“If the recording is accurate, it shows clear bias against BLM protesters and confirms what a lot of people suspected," James Shaw, state legal panel chair at ACLU of Florida, told CL. "The right to protest shouldn’t depend on whether law enforcement officers are sympathetic to your cause. When that happens, First Amendment rights have no chance.”

"I think it shows TPD's mentality that day. They deliberately escalated the situation and started the fight with the protesters,” Brett Metcalf, a Tampa criminal defense attorney, told CL. “I don't know if TPD wanted to fabricate charges against these people or if they were just trying to set them up to commit a crime they wouldn't otherwise commit. But neither explanation is a good one."

Three protesters still face charges from this 4th of July protest from 2020. Last week, Hillsborough County State Attorney Andrew Warren’s office filed a ‘Motion in Limine’ to restrict what can be discussed during the trial. The motion would ban the discussion of protesters' right to free speech, their constitutional right to assemble, the alleged peaceful nature of the protest, and police conduct that day.

The motion is set to be debated on Sept. 13 at 1:30 p.m. at the Hillsborough County Courthouse and the trial dates are set to begin on Oct. 6. 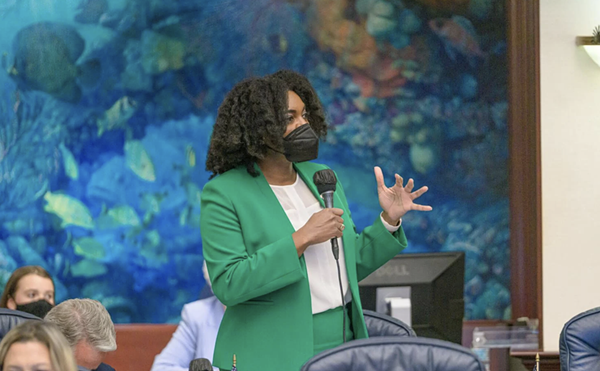