The union said Thursday that UCF has 1,900 open job postings. 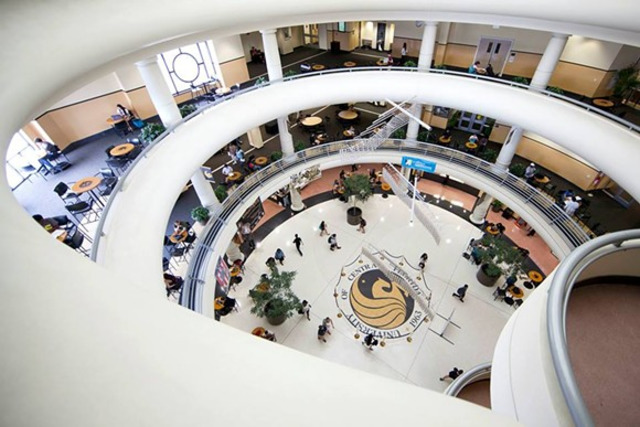 PHOTO BY UNIVERSITY OF CENTRAL FLORIDA/FACEBOOK
The University of Central Florida’s faculty union is asking administrators for answers on how UCF plans to spend $112 million in federal pandemic relief money that the union says the school is “sitting on” while the turnover rate of faculty members climbs.

The university’s chapter of the United Faculty of Florida on Thursday held a news conference aimed at ratcheting up pressure on administrators to spend unused money.

UCF’s share of the federal pandemic aid awarded through Sept. 30 included $164.8 million in what’s designated as “institutional” funding, according to the U.S. Department of Education. That money can be spent in many ways, including on payroll. Of the $164.8 million, the university had spent just shy of $53 million, or roughly 32 percent, by the end of September.

The union relied on the federal education department’s data in calling on the university to spend more of the money.

UCF expects to lose $49 million from coronavirus impact: President Alex Cartwright said the university is moving forward with the assumption that classrooms will reopen in the fall.

“They are sitting on over $112 million in unspent dollars. Some of that funding is set aside to provide relief for employees during the pandemic,” said Robert Cassanello, president of the UCF faculty union and an associate professor of history.

The university has received about $314.4 million in overall funding from the federal Higher Education Emergency Relief Fund, or HEERF, and has spent 50.1 percent of it, according to the federal education department.

Chad Binette, UCF’s assistant vice president of communications, refuted the union’s claims, saying the university has “allocated” $119.1 million of the institutional portion of the federal funds and plans to spend an additional $25 million including on expenses related to informational-technology systems and heating, ventilation and air-conditioning systems.

“The institutional share of HEERF dollars has supported expenses such as additional financial assistance to students, support for remote instruction and course delivery during the pandemic, and COVID-19 responses and preparedness,” Binette said Thursday in an email to The News Service of Florida. “They also have reimbursed revenues the university lost during the pandemic. All of the expenses must be related to the COVID-19 pandemic and must follow the guidelines set by the federal government.”

Binette also said the university has not hit a deadline for spending the federal money.

“The federal deadline for spending dollars awarded in the latest HEERF round is next year. We continue to utilize those dollars in line with both the purpose and requirements set by the federal government,” Binette said.

Faculty members who spoke during Thursday’s news conference said the school’s administration has praised UCF faculty but is not backing up that approval with increased compensation.

Matthew Mosher, an associate professor in UCF’s Nicholson School of Communication and Media, said faculty pay has been stagnant in recent years.

“UCF faculty, however, have not seen a raise since 2019,” Mosher said, also citing a pricey Orlando housing market. “By not increasing its employees’ salaries to match the rate of inflation, UCF is effectively cutting our pay every year.”

With the union in the process of working out a collective bargaining agreement with the university, Mosher said stagnant pay is one of several factors contributing to increased turnover.

“Staff and faculty alike are seeking employment elsewhere in places where there are stronger COVID safety measures, more remote work opportunities and better pay. Can you blame them? UCF is doing very little to keep its employees here,” Mosher said.

An analysis published by the UCF Board of Trustees’ Budget and Finance Committee on Nov. 16 detailed a growing number of faculty members leaving the school, labeling it the “great resignation.”

The union said Thursday that UCF has 1,900 open job postings.

Andrew Gothard, president of the United Faculty of Florida and a professor of English at Florida Atlantic University, said UCF isn’t the only university that hasn’t spent the bulk of its federal pandemic aid.

“After two years of arduous work, they are being told by administrators across Florida, in the same manner as at UCF, that despite millions of dollars in federal funding that came in throughout the pandemic, there isn’t enough money to pay these faculty a fair wage,” Gothard said during the news conference.