HCSO says no one was injured, but reminds everyone to seek shelter when you hear thunder. 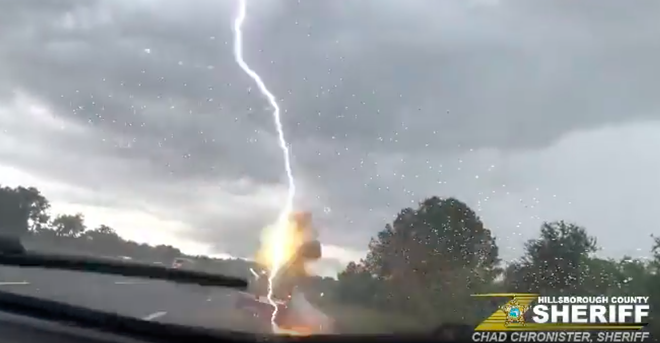 Screengrab via HCSO/Instagram
A deputy with the Hillsborough County Sheriff's Office (HSCO) had a close call last week after a bolt of lightning hit her truck.

According to a post by HCSO, the incident happened on July 1, while the deputy was traveling north on I-75 from Sun City Center.

"As the deputy was driving through the rain, she heard a loud clap of thunder, her dashboard lights turned on, and then the entire car turned off," said HCSO. "When she looked in the rearview mirror, she saw smoke. At first, she thought her tire popped, but as she, and other nearby drivers, pulled over she saw this video and the nearby lightning strike and realized it was the lightning that damaged the car."

The driver behind the deputy just happened to be filming nearby lightning strikes, and caught the incident on video.

The incident occurred just a few days after an 11-year-old boy was struck by lightning while on a boat in Riverview.

Florida currently leads the country in lightning strikes per year, averaging 223 lightning events per square mile for 2021, according to the National Lightning Data Network.