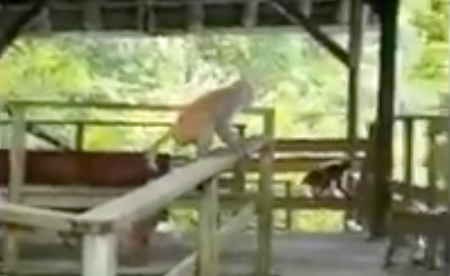 The phrase "monkey attack in Florida" rolls of the tongue for a reason.

While it's true that there are no species of monkey indigenous to Florida and that monkeys tend to not show aggression toward humans, the word "Florida" makes all things possible.

A YouTube video posted Sunday, reportedly captured at Silver Springs State Park near Ocala, shows a group of people nearing a wooden shelter. Off to the left, a couple of rhesus monkeys scampered about, and some even jumped onto the railing surrounding the shelter.

"Guys, there's wild monkeys here in Florida," said the young boy who narrated the video. "Guys, this is Florida. There are, like, no monkeys in Florida."

"Well, they probably had them when they had the theme park here," a nearby man said.

The boy spotted some babies, but not long after that the adult monkeys apparently began to charge at the humans who were encroaching on their turf.

"The monkeys are attacking us! Oh my God!" the boy exclaimed, though his voiced was tinged with more laughter than fear.

The shaky two-and-a-half minute video showed the monkeys repeatedly going after the retreating humans. No one appeared hurt.

"We just got attacked by monkeys, guys," said the young narrator. "This is insane. This is Florida. I haven't heard of wild monkeys in so long and they're just attacking us like mad. That was crazy."

For the record, here's a very Florida explanation for where that rhesus monkey population came from, per the Orlando Sentinel:

The monkeys were brought to Silver Springs State Park by Colonel Tooey in the 1930s. Tooey owned a river-cruise tourist attraction and thought the monkeys would be a defining trait of the ride. However, after purchasing the monkeys from a wildlife dealer out of New York and placing them on an island at Devil's Elbow on the Silver River, they promptly swam across the water and thrived in nearby woods, a state historical timeline shows.

By 1963, the population had grown to 78 rhesus macaques, documents show.

A trapper working under state permits reported that he captured and removed 772 monkeys from the park between 1998 and 2012. The monkeys were sold to a biomedical research facility, but after a public outcry the practice stopped.

It's unclear why they attacked, as they rarely do. It was likely due to one of two things: a) the monkeys thought they were carrying some food they might like or 2) they were getting too damned close to the baby monkeys.

As of this writing, the original video has nearly 7,000 views, and that number will likely go up quickly as word travels around the interwebs.

If you're ever in Silver Springs State Park, Ocala National Forest or any other nearby area the monkeys are known to roam, here are some tips on how to avoid being attacked.